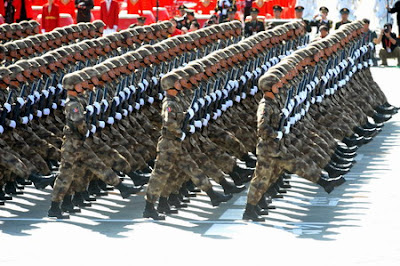 Good grief, no. The question doesn't even make sense, does it? Well, Michael Lind seems to think it does. His Salon essay explains why.

Frankly I was actually hoping for something coherent from him, because I am speaking on classical liberalism and libertarianism next week, and could use a thoughtful foil. But Lind is so far off base I hardly know where to begin. Well, as part of the extended "Defending Liberty" month, I'll at least hit a few highlights.

First, regarding disregard for democracy...Lind is apparently unaware of a reasonably substantial literature on the threat of illiberal democracy, one not written by libertarians, but by liberals & progressives, including Fareed Zakaria and Walter Russell Mead. And it's a good literature, too. There's nothing particularly sacred about democracy per se. Democracy itself is only a tool for selecting and managing governments, not a set of principles for determining gov't policy -- which is really what libertarianism is about. One certainly can have a democracy that is dangerously authoritarian -- just ask Hugo Chavez.

Second, Mises' alleged support for fascism is taken out of context. Mises argued, in one very short section of his book Liberalism, that it appeared fascism would be a useful temporary stopgap for preventing the spread of Marxism, but that it was entirely unsuitable, unsustainable, and ultimately destructive, and needed to be replaced by liberalism. In the same book he warned that Europe was likely to repeat WWI if this didn't happened. Mises also wrote this after just having managed to prevent Austria from going Bolshevik -- he prevailed on minister Otto Bauer, a Marxist, to not to institute a Marxist regime; keep in mind Mises was aware that Bolsheviks were conducting mass executions in Russia and Hungary (Bela Kun regime). And this was before the rise of the Nazis. Yes, in that context, Mises' statement, which is an aside in a book on Liberalism, makes sense. And was Mises anti-democratic? Good grief, one of his main proposals in Liberalism was to conduct popular votes to determine national borders, to allow people to choose what country they'd be part of. Democratic voting was his preferred solution to the problem of how to divide up the Austro-Hungarian Empire, determine borders peacefully, and organize governments. Lind is entirely ignorant of all this, and his charge against Mises is crackpotty and dishonest. He paid no attention to what Mises actually said.

Third, Hayek and Friedman were explicitly in favor of the free market policies that Pinochet pursued; these policies came some time after his coup. They did not endorse or support political repression. Frankly, I agree, the policies were good, and they reversed Chile's economic decline and were very successful. I know several Chilean economists -- not libertarians -- who are entirely in agreement with this as well. This doesn't make us apologists for Pinochet's brutality and authoritarianism. Lind makes no sense here -- can't he understand the difference between thinking a regime gets economics right and entirely endorsing the regime? Most economists think China has pursued extremely successful economic policies, since it went from being one of the worst economic disasters in history to the greatest single growth miracle in less than one generation, from policies that led millions to starve to death to the highest growth rates in the world. But applauding China's economic policy hardly constitutes endorsement of Chinese authoritarianism. Everyone I know thinks China got it largely right on economics but condemns its authoritarianism. Lind is again being extremely dishonest here.

Fourth, re Hans Herman Hoppe and "Democracy, the God that Failed," support for the Confederacy, discounting the evil of slavery, etc. -- well, ugh. The Ledwig von Rockwell Institute again snatches defeat from the jaws of victory. If we look at these crackpots, what is there to say in response to Lind, except, "OK, I get your point...ugh!"

Let's face it, this wing of libertarianism is authoritarian, in its own bizarre way. Hans Herman Hoppe is basically a madman, as are most of the bigwigs at the inaptly-named Ludwig von Mises Institute. They are a bizarre subculture of libertarianism -- they are (allegedly) Rothbardian anarchists, for the most part, although their anarchism often evaporates and one finds them endorsing all sorts of illiberal states. I think some, e.g. Walter Block, really are anarchists. Those who aren't anarchists tend to be even crazier -- e.g. neo-confederates (founder Lew Rockwell) or monarchists with sympathies for Nazism (Hoppe). I've met and argued extensively with many of them, including Hoppe. I can hardly say how crazy they are. They campaign incessantly against all other libertarians, for whom they express deep hatred -- e.g. against the likes of Gary Johnson, Prof. Jeffrey Miron of Harvard, the Cato Institute, Mercatus Institute, IHS, Tom Palmer, the Koch Brothers, me (well, not *incessantly* against me, but I'm proud to have been occasionally denounced).

So, if you want to find "libertarians" who apologize for slavery, claim Lincoln was worse than Hitler, fraternize with neo-nazis, denounce Ukraine's Orange Revolution, speak favorably of Putin and Lukashenko, are 9-11 Truthers, believe the Illuminati and Freemasons and Jewish bankers are behind the New World Order conspiracy, think that the killing of Osama bin Ladin was first degree murder, oppose Medcins sans Frontieres, and, and, and... well, they are certainly well-represented at the Lew Rockwell Institute.

Yes, there are insane "libertarians." But this is basically a problem of insane people, not one of libertarian ideas themselves -- ideas these mad kooks don't promote even halfway consistently. Almost every libertarian I know agrees the Mises Institute people are wrong-headed and destructive. Libertarianism itself is a systematic defense of individual liberty, an extremely valuable and honorable set of ideas.

I was hoping Lind would understand this. But he doesn't.

I am not overlooking the wonderful news that Muammar Qadaffi's homicidal reign is coming to an end. I certainly hope he soon comes to a personal end as well. He was a sociopath, governed only by his own fixation on his own imagined genius and his murderous hatred and resentment for anyone who disagreed with him, all of which " renders [him] the object of universal dread and abhorrence, who, like a wild beast, ought, we think, to be hunted out of all civil society," as Adam Smith puts it.

Muammar Qaddafi -- to hell with you!

Photo: Muammar Qaddafi with one of his friends, for whom we have similar wishes.

I've been extremely busy with things other than blogging, but still have quite a bit I want to post for "Defending Liberty Month." Hence "we" at Unforeseen Contingencies are pleased to announce that we're extending our series into September. Watch in particular for essays on libertarianism and war, on Murray Rothbard, on why social conservatives should support same sex marriage, and more!

Heck, we have so much good stuff we may extend this indefinitely!

The Illuminati are after us! 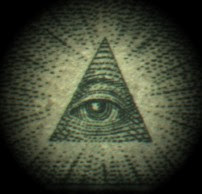 It's been obvious for quite some time that Lew Rockwell and his merry band are hard core conspiracy theorists, but all the same, this post is quite something. Apparently we're to believe that the entire Federal government is nothing but a pagan occult conspiracy, inherently evil from its inception. Quick, call Robert Anton Wilson!

It's always been clear, too, that the Rockwellites see the United States of America as the ultimate evil empire, but I'd always supposed that they only dated this as far back as Lincoln. I guess I was mistaken. Obviously, once you understand Rothbardism, you'll understand that America is simply evil, always has been, and always will be, until "the regime comes down."

It's unthinkable, of course, that any government official in the west would actually care about individual rights, it (Umm, would it be impolite to point out to Lewdwig Rockwell that Syria has no oil?...)

Thoughtful analysis from Volokh Conspiracy, additional evidence that Ron Paul is not really a libertarian. Gary Johnson, on the other hand, is. 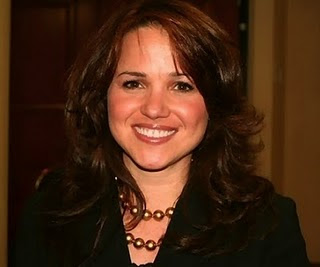 Look, here's the problem. There's no way "we" can endorse Bush 44, Barack Obama. And of course, Ron Paul is out. Gary Johnson the only real libertarian in the race, has less chance of winning than we do. Mitt Romney, best of the remaining Republicans...ugh. And worst of all, the candidate with the momentum seems to be the lunatic queen of the American Taliban, Michele Bachmann. Yikes!

Here's a fine example of Michele Bachmann's remarkable grasp of reality. In 2009, a number of countries, led by China, suggested that the IMF establish an international currency to take the place of the USD in international payments. This would be bad news for the United States, as we benefit immensely from having our own currency as the international medium of exchange. For one thing, our external debts are denominated in our own currency, which is why our debt situation is unlike that of Greece, the Asian countries in the '98 crisis, or anyone else. We are in a mush stronger position. For another, when we buy oil, we do not suffer from exchange rate risk. Oil is traded in USD, and enormous advantage for us.

Fine... but numerous creditors are getting a bit tired of our profligate ways, and -- worrying about the potential for a debt crisis or inflationary "solution," have suggested an alternative to the dollar for international trade. Rep. Michele Bachmann apparently believed that this would mean the U.S. would leave the dollar standard, and promptly introduced legislation preventing the U.S. from replacing the USD with foreign currency.

Bachmann is a lunatic. That she's a darling of the Republican party, and a potential candidate, is terrifying. Barack Obama is no good at all, but everything we see about Bachmann suggests she's completely out of touch with reality. Что делать?

Well, here's "our" solution... Christine O'Donnell for President in 2012! She's far more photogenic than Ms. Bachmann, surely no crazier, her legislative accomplishments are no less than MB's, and, unlike Ms. Bachmann, we know Christine is not a witch. We have her word on this, yet Ms. Bachmann has never denied association with withcraft. What is Michele hiding?!

A moving and important address

The Prime Minister (er, Taoiseach, and no, I cannot pronounce this) of Ireland, Enda Kenny, addresses the Parliament on the issue of sexual abuse by officials of the Catholic Church, and the continued efforts of the church to hide these crimes. It's brilliant and very moving. I'm especially impressed how he responds to Ratzinger's statement that the Catholic Church must be above the law in these matters (starts at 11:18).

The continuous coverup and protection of serial child molesters appears to go to the highest levels of the church. This organization ought to be subject to criminal investigations.

The Inerrant Word of God?

Um, which word? Serious scholarship shows (continues to show, really) that the the Bible is a human creation that has evolved over time... just as Thomas Paine told us.

The news story is definitely worth a read.

Liberty Month in the Spanish Peaks!

August is Defending Liberty Month here at Unforeseen Contingencies, and to kick it off we celebrated with a backpack trip into the Spanish Peaks in the Lee Metcalf Wilderness Area, Montana. A great time was had by all, all but the several thousand mosquitoes we DEETed into submission! No liberty for those little tyrants. More exciting posts to come! 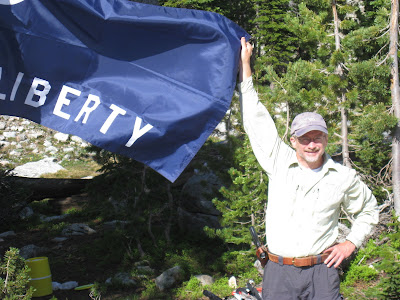