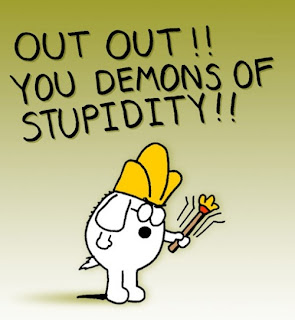 I believe there are valid reasons why someone might oppose the intervention in Libya. After all, foreign policy questions are not simple -- they typically require that one solve a particularly complex set of questions concerning fundamental ethics, particular facts of the case, theories of economics & political dynamics, and who knows what else. But that certainly doesn't imply that all answers are created equal -- to the contrary, many popular answers focus on only one, or even none, of these...and in doing so, they can become stupid. Here's an example.

In my previous post I referred to inane argumentation concerning the Libyan intervention. Consider this, from Charles V. Peña of the Independent Institute: "If getting rid of tyrants and dictators who oppress their people becomes the criterion for using U.S. military force, who do we target next: China? The so-called Democratic Republic of Congo? Eritrea? Iran? Kyrgyzstan? Venezuela? Zimbabwe?"

Good grief. Never mind whether the author has correctly characterized the objective (I am sure he hasn't), what is frankly stupid about this is that he assumes that every instance of trying to achieve a particular goal requires the identical means. Well, it doesn't.

Given the situation in Libya, bombing Qaddafi's troops probably saved thousands or tens of thousands of lives of people who have been non-combative but opposed his dictatorial rule. OTOH, bombing, say, China or Syria wouldn't save anyone, because no massacre is imminent. So much for reason to bomb.

But what to bomb? In Libya, there was a particularly well-defined set of targets -- Qaddafi's troops and the air defense and command & control structures that support them -- while in China or Syria it's unclear what one would bomb, even if one wanted to...and again, that's because the particular facts of the case are different. There's no mass of PLA tanks bearing down on a city of full of people opposed to Hu Jintao, and Hu Jintao hasn't pledged to murder every last person who ever voiced an opinion against him, even if they are hiding in a closet. For that matter, Hu Jintao doesn't seem to have blown up any civilian airliners full of American citizens over Lockerbie, or anywhere else. He's unlikely to attempt it in the future. Qaddafi is.

So why is it so hard to understand why bombing Libya doesn't imply one should bomb China, just because both have oppression?

Or consider Syria. As I documented in my previous post, the situation in Syria is quite unclear, and it certainly doesn't appear that mass executions are being planned. Much as it pains me to say so, Hillary Clinton is absolutely right when she says that each Middle East situation is unique and requires different policy. Why is this apparently impossible for Peña to understand?

I think it's because I am relying on facts here, and his analysis is nearly devoid of them. Simple moral principles are crucial for decision making, but by themselves they are not only not sufficient, they become a self-imposed blindness. The author, Charles V. Peña, has, stupidly, blinded himself. His basic principles might be right, but his application of them is... well, stupid.

In an upcoming post I'll take a look at Lew Rockwell, who goes well beyond stupidity and descends into evil.

Making sense out of Syria...and conservatives

As it turns out, that's not possible, unsurprisingly.

I mention this because of some of the inane discussions I've heard in the last few days asking why Basher Assad and the Al Khalifas don't warrant military intervention, if Qaddafi does...after all, Qaddafi kills demonstrators, and the governments in Syria and Bahrain have too. So either all should be attacked, or none, or we're hypocrites or worse.

As if all there is to foreign policy (or any policy) is simple-minded application of half-baked moralisms. May we be preserved preserve us from such nonsense! (BTW, most of these arguments came from the left, not right...the left makes no sense, either.)

With this in mind, let's all thank heavens for principled and farsighted men who understand the real issues in choosing foreign policy. Thank you, Dr. Gingrich!

Postscript: I suppose there's always the possibility that some reader might not pursue the links I include, and hence might not note the irony of my comment on Newt Gingrich. Well, now that Mr. Gingrich has declared himself a candidate for the Republican nomination, I'd better hasten to point out that the link exposes him as a completely hypocritical coot.

I've just added two new blogs to the blogroll of Unforeseen Contingencies. The first is Walter Russell Mead's The American Interest. I've read mead for some time in Foreign Affairs, and have recently discovered his blog. Here's a particularly thoughtful piece on the Libyan intervention, Obama's War. I am still planning further commentary on this topic, and particularly the Rockwellian take on it, when I get some time to write.

The second is Neeka's Backlog. It's a simple personal blog (by Veronica Khokhlova, someone I do not know) from Kyiv Ukraine, and features photography, simple observations, occasional biting commentary on politics, and even audio recordings. I love it - it's poetry in blog form. I linked to this one back in 2006, in a post or two, but never linked to it. I re-encountered it today, and want to keep following. (That's really the criterion for being added to the UC blog and news rolls, BTW - my personal desire to have an easy way to get to things I want to follow.) Here's a frustrating, outrageous, amusing story from 2009.

I'm adding another site to the Unforeseen Contingencies list of news sources: Kavkaz Center, which is essentially the news service of the anti-Russian rebels in Chechnya. I read the site from time to time, and have been watching it lately, waiting for them to take a side in the Libyan conflict. They were non-committal for a while, but have finally budged: they seem to have decided that the intervention is an anti-Islam Crusade.

The implications of the story are interesting. I certainly agree with Alain Juppé's alleged comment (I cannot find any source other than jihadist websites for it) that any regime that oppresses its people should be in jeopardy. OTOH, bombing is generally not effective at changing regimes. In Libya's case, bombing had an immediate effect of saving the lives of many, many people who opposed Qaddafi's regime, and there's ample justification and reason to bomb Qaddafi himself; hence bombing made sense. OTOH, bombing the Saudi regime would make little sense. The regime is offensively illiberal, but it also poses a check on the equally illiberal Iranian regime. And it is hard to figure out what good bombing might accomplish, unlike the situation in Libya. Regardless, I don't believe anyone is seriously contemplating bombing Saudi Arabia... unless it is Iran.

On an unrelated note, here's another Kavkaz Center article. According to it, the parents of anti-Russian rebels are being forced by the Russians to beg their children to surrender, with threats of violence against rebels' parents if they don't. I'm reminded of Stalin's notorious Order No. 270 that provided for the arrest and punishment of family members of soldiers who retreated or were captured during the Second World War. It's no surprise, but Putin's government appears to be resurrecting Stalinesque brutality.

A constraint that makes no sense

There's an aspect to the U.N. intervention in Libya that doesn't make any sense at all. U.N. Security Council Resolution 1973 calls for taking all necessary measures to protect civilians from being slaughtered by Qaddafi and his forces. Good. Were it not for this intervention, the people who opposed this Stalinesque madman, or were suspected of not supporting him sufficiently, would be doomed to being tortured and butchered. It's unclear why one needs a U.N. Resolution to stop mass murder from being committed, but there it is anyway.

What's bizarre is that Qaddafi himself is supposedly not a target of the intervention. The handwringing in the press, and apparently in government circles, over what to do about Qaddafi makes no sense. "We" at Unforeseen Contingencies respectfully suggest Get him!

There's no dispute - even from Qadaafi himself - that he's behind the extermination of anyone who speaks out against his dictatorship. And this is hardly anything new from him - he's a ruthless and megalomaniacal dictator, bent on protecting and increasing his personal power. Consider his mad scheme in the 1980s to subvert and rule Africa under the guise of a Pan-African Union, his war against Tanzania in attempt to save fellow sociopath Idi Amin, his war against Chad, his war against the West, e.g. the bombings of Pan Am Flight 103 over Lockerbie Scotland and UTA Flight 772 over Niger, the murder of London police officer Yvonne Fletcher by Libyan "diplomats" shooting from the embassy, the hijacking of Pan Am Flight 73 in Karachi and subsequent murders of twenty passengers mad scheme... Given all this, and the obvious fact that if he's ever able to do so, he'll murder anyone who opposes his reign, is there any good reason why he's not a primary target of these operations?

Sure, perhaps there are reasons why it would be desirable to put him on trial, so if he can be captured and tried instead of killed, that might make sense (if nothing else, his speeches in his own defense would be source of endless humor...or at least endless). But Qaddafi himself should certainly be a target, and if he cannot be captured he should be blown to bits. He's a sociopathic killer, and one with millions of dollars at his disposal. The world needs to be rid of him, as soon as possible. 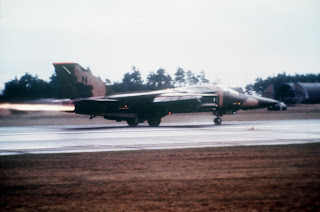 Hooray! U.N. authorizes military action to protect civilians. Qaddafi had just gotten through declaring to those who resist his dictatorship "We will find you in your closets. We will have no mercy and no pity." Very nice. Hopefully it's not too late to stop Qaddafi's forces, but it's never too late to go after a homicidal sociopath, and it's not as though there's any doubt Qaddafi fits this bill. After all, what's the point in having all this expensive hardware if you're not going to use it on someone truly deserving... someone like Colonel Mo.

Mr. Obama, you on occasion compare yourself to Ronald Reagan. Here's a great opportunity to try to make this a bit more than specious rhetoric.

I'll have a more thoughtful post on dictators and uprisings soon, I hope...but for now, here's a wish that Mr. Qaddafi's reign is over.

Footnote: Of course, Lew Rockwell laments the U.N. authorization against Qaddafi. You see, it's all a plot against Muslim peoples and China, for oil. His insane rant has to be seen to be believed. Anarchists for Qaddafi, good grief...but well up to his usual standards.

Regarding UC's recent hiatus... I've been laid low by a couple of nasty illnesses, followed by five days of consecutive power outage from an ice storm, followed by a third even nastier illness afterwards. None of this has been serious, but it's kept me from commenting on the latest unravelings, of which there are many.

But like Ukraine, we at Unforeseen Contingencies are still not dead yet, and are getting back into action again!