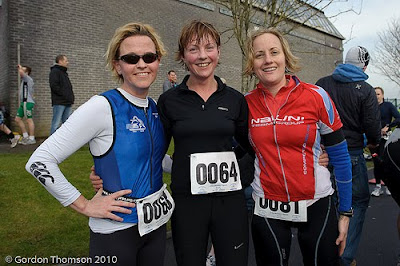 ...in the Unforeseen Contingencies Fiscal Responsibility Limerick Contest. The winner will receive a nice prize, and keep in mind that "we" here at UC have developed the capability to deliver it almost anywhere on Earth's surface. (Belarus, North Korea, and Zimbabwe remain problematic, but we're working on it!)

Get those entries in!

Note: the lovely ladies pictured here are winners of race 1 of the Limerick Tri Club 2010 Duathlon Series (Limerick, Ireland). This was the best thing to come up when I Googled "Limerick picture." Incidentally, the Club's website is excellent and worth checking out, especially the link to Gordon Thomson's beautiful photography.

Re the assassination of Mahmoud al-Mabhouh in Dubai, "everyone" is assuming it was the Mossad. But now Hamas says the two arrested are from Fatah.

There's one thing of which we can be certain: we are very capable of inventing more plausible stories than could possibly be true. If only we were as good at selecting the correct one from among them. (The real problem is that the truth, often as not, probably remains an unforeseen contingency.)

Business cycles: hot on the trail!

In the new York Times, Paul Krugman speculates as to why in the recent "unpleasantness" Canada has largely avoided the banking crisis that the United States suffers.

In the course of his discussion Krugman observes that "It wasn’t interest rate policy. Many commentators have blamed the Federal Reserve for the financial crisis, claiming that the Fed created a disastrous bubble by keeping interest rates too low for too long. But Canadian interest rates have tracked U.S. rates quite closely, so it seems that low rates aren’t enough by themselves to produce a financial crisis."

This is largely nonsense for several reasons (Canada didn't track U.S. rates closely, for one). But for a while I've also been increasingly doubtful that low interest rates "by themselves" are the culprit. Artificially low rates start a fire. The accelerant that makes it run wild is opportunism, corruption. William Black has documented this "running wild" in America's S&L crisis, and we've had something similar with the current financial crisis. Low rates are a big part of the "criminogenic environment" that government helps establish (that's my thesis, not Black's), but not a full account of the story.

Mises himself observed this opportunism during the post-WWI inflation in Austria, but chose to speak only on what he saw as the pure economics of interest rate policy...a mistake, I think, because both corruption and interest rate policy appear to be common to historical boom-bust cycles.

Maybe it's time that we combine Austrian economics and criminology. A coordinated investigation of Treasury, Fed, and Goldman, anyone?

Here's an absolutely horrifying discussion of child slavery in Haiti...where it appears to be legal. (From PRI's The World)

According to Harvard researcher E. Benjamin Skinner, Haiti has the largest number of slaves in the Western hemisphere. A child sex slave might cost 50 USD. It's not so uncommon for rural Haitians to give up their children to people who prove to be human traffickers.

How long before Matt Taibbi apologizes? He seems to be too hate-driven and bile-filled for this. When you scratch the surface, the alleged superior morality and intellect of progressivism is little more than self righteous posturing.