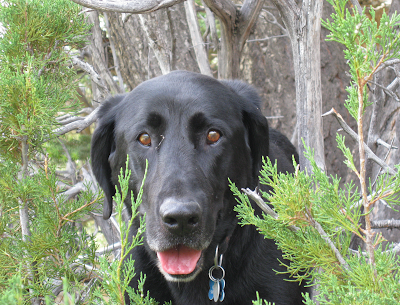 Comments:
I shocked and saddened. While Hans is gone perhaps D is not.

Here's hoping for her safe return.

I am so sorry to hear about your losses. We have three (dogs, not climbing friends, obviously), one large, one medium and one tiny, and the two bigger ones regularly run off after real or imaginary prey. There are so many things that could harm them, and they've got absolutely no awareness of the world around them when they are focused on the chase. Sometimes they take a while to come back, and the fear grows gradually in the pit of your stomach. I can't imagine what it must be like, waiting and hoping. They give so much pleasure and love, it is a real bereavement to lose one.

Occasionally, the improbable does happen and an animal turns up months later, like this. I don't pray, but my best wishes are with you for this sort of ending.

Thanks Jeff. Thanks Bruno. I do appreciate your support.

Still no sign. Today I managed to check the culvert completely (required some swimming). I cleared an obstruction or two, but obviously it gets periodically jammed and then flushed. I also went downstream looking for a body; nothing.

I find it very sad and disheartening.