Greetings, fair readers!  On July 9th I completed my 57th ultramarathon, the Beaverhead 55K, in the rough vicinity of Salmon, Idaho.  The race itself starts at Lemhi Pass on the Montana-Idaho border, and runs along the Continental Divide until it finally drops off into Idaho and finishes in cow pasture near Salmon.  It's a spectacular race, and the hardest course I have ever run.  This was my third time there.  I was on track to PR the course but a lightning storm delayed me a bit.  Still, I was roughly an hour faster than last year.  Many thanks to RD Dave Tarkalson and all the many crew and other volunteers who make this great event possible.  I'm already prepping for next year! 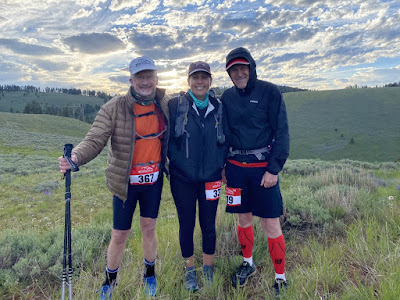 Me, Christina T., and Steve B. at start. I was supposed to run with them, but both had problems that slowed them and I was really on track, finished almost two hours ahead. Steve and I ran the second half together last year. This year was his fifth finish. 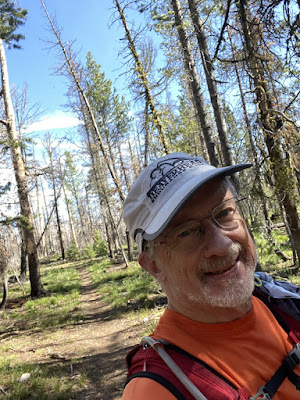 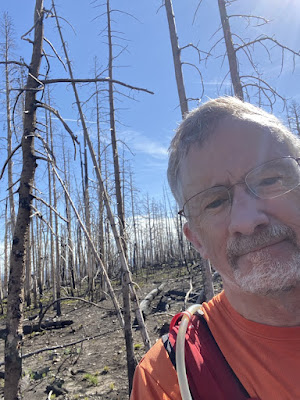 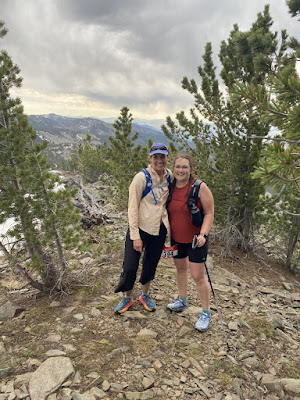 Leslie and Ashlee from Salmon. I ran with them quite a bit over toughest parts of the course. 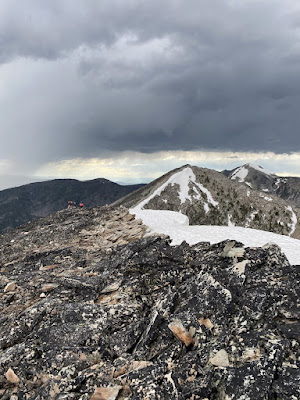 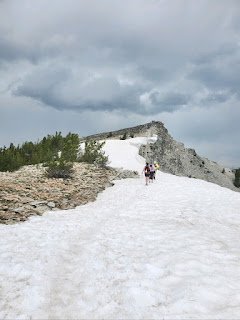 Me, Leslie, and Ashlee crossing cornice. We had just seen lightning both ahead and to west of us. 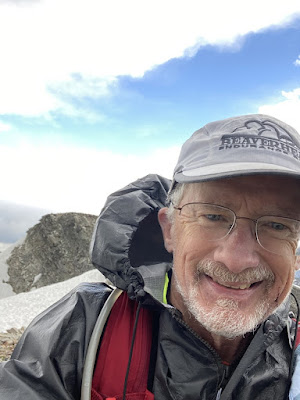 Apparently I am enjoying this. 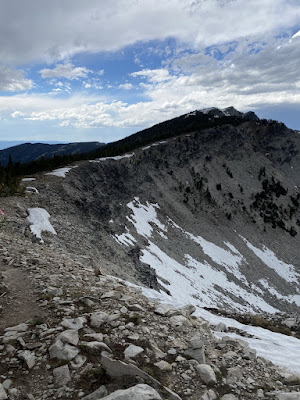 More of the course. The steep side is Montana. 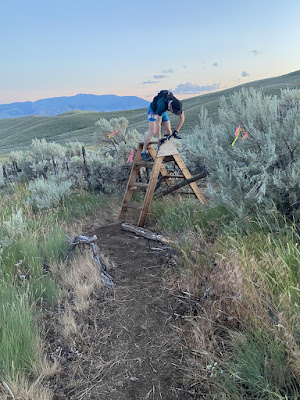 Last mile. Just because you're off the mountain doesn't mean there are no more obstacles. 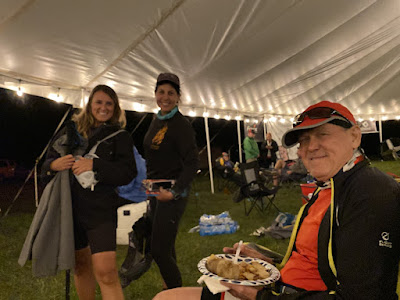 Post-race! Christine and Steve, plus Steve's daughter Meredith, there as support. 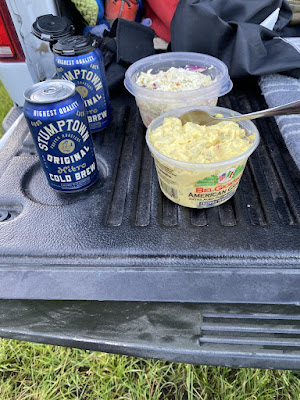 Post-race breakfast. I camp in the back of my truck at the finish. This is the perfect start to the morning. 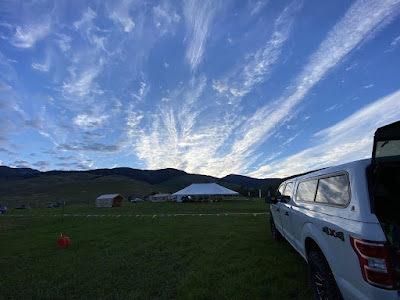 Sunrise over the divide.

Greetings, dear readers!  It's our annual July 4 post.  Two hundred forty six years ago today, the Declaration of Independence was released, ending America's status as a set of English colonies and starting the American nation.  This disrupted the British colonial system, and even more, disrupted the world by introducing a fundamentally new idea: states are means to an end, not ends in themselves.  The Declaration remains the greatest political document ever written.  Today the Daily Caller published a short essay by your faithful Chief Blogger and CEO of Unforeseen Contingencies on why everyone everywhere should celebrate American Independence Day and the Declaration.

Two hundred forty six years later, many of us are dedicated to the principles on which it rests: the inherent and unalienable natural rights of the individual, the status of government as a mere servant and means to the end of protecting those rights, and peaceful relations among all who agree to respect and live by those rights.  These are universal principles, applying to all human beings.  And they are the basis of civilization, finally made explicit.

Oddly, there are those today who knowingly reject these principles and oppose liberty...viscerally hate liberty is often accurate.  There's something wrong with them.  If one does not accept unalienable, inviolable individual rights, then what is left?  As President Calvin Coolidge noted,

If all men are created equal, that is final. If they are endowed with inalienable rights, that is final. If governments derive their just powers from the consent of the governed, that is final. No advance, no progress can be made beyond these propositions. If anyone wishes to deny their truth or their soundness, the only direction in which he can proceed historically is not forward, but backward toward the time when there was no equality, no rights of the individual, no rule of the people. Those who wish to proceed in that direction can not lay claim to progress. They are reactionary. Their ideas are not more modern, but more ancient, than those of the Revolutionary fathers.

And I'll add, they have no grounds to object if we pitch them into the harbor along with the tea.  They've denied the fundamental grounds on which society exists.
One of the interesting things about the Declaration is what was in Jefferson's first draft.  Jefferson included a condemnation of slavery.
He has waged cruel war against human nature itself, violating it's most sacred rights of life and liberty in the persons of a distant people who never offended him, captivating & carrying them into slavery in another hemisphere, or to incur miserable death in their transportation thither. This piratical warfare, the opprobium of INFIDEL Powers, is the warfare of the CHRISTIAN king of Great Britain. Determined to keep open a market where MEN should be bought & sold, he has prostituted his negative for suppressing every legislative attempt to prohibit or to restrain this execrable commerce. And that this assemblage of horrors might want no fact of distinguished die, he is now exciting those very people to rise in arms among us, and to purchase that liberty of which he has deprived them, by murdering the people on whom he also obtruded them: thus paying off former crimes committed against the LIBERTIES of one people, with crimes which he urges them to commit against the LIVES of another.

To Jefferson's consternation, this was unfortunately removed in order to keep some southerners from rejecting independence.  It ultimately took a war, 80 years later, to end the crime of slavery.
Today, the progressives and more radical leftists who comprise the Democrat Party and administrative state condemn America because its principles were not instantly and perfectly implemented.  At the same time they express sympathy for socialism, excusing its blood-soaked legacy with the lament "true socialism has never been tried."  They live in what has proved to be the freest, most benevolent, and most prosperous country in human history, and they propose dismantling it and substituting tyranny.  In my DC essay, I direct just one line to them: For those who don’t value freedom: just leave us alone; you’ll be better off not provoking those of us who do.  An editor (not at Daily Caller!) suggested I remove it, because it seems negative and "disrupts the flow."  But that's the whole point.  The entire Declaration is positive, unless of course you are King George III, and then it's disruptive.  And George was asking for a little disruption.  So too today's left.
I'll conclude with the last paragraphs of my DC piece:
People everywhere should celebrate. It’s not just an American holiday, it’s about the success of a universal set of principles. Each of us should take time, today, to read or re-read the Declaration and to dedicate, or re-dedicate, ourselves to protecting and advancing freedom for all.
The Fourth of July is a celebration of the triumph of freedom, and it should be celebrated by everyone who values freedom, peace and prosperity. Happy Independence Day!
// posted by Charles N. Steele @ 20:35 0 comments