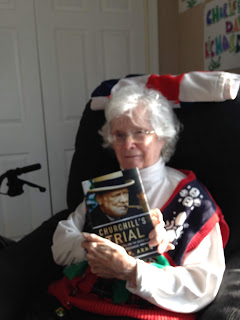 Usually I end the year with a retrospective and predictions for the coming year, but this won't be the usual end-of-year post.  My mother died on the morning of December 26.  I was with her.

She had been slowly failing over time, but began a sharp downturn around the 21st or 22nd.  I flew to Montana and arrived on the 24th.  She was in a small assisted living facility, a wonderful place where they gave her exceptional care.  When I arrived, they told me they doubted she'd survive the night.  On the other hand, my mother is... was.. very tough.  I stayed with her that night, and the next.  David (one of my brothers) arrived Christmas night, and she was still hanging on.  David is an MD and a  minister.  He said a prayer with her, and we talked until after 1:00 AM.  I went to sleep  in Mom's room about 2:30; I awoke at 4:10 and immediately knew she was gone.

My mother was a very smart, strong, good person.  She had a very successful career as a dermatologist (one of her patients once told me how she'd saved his life by spotting and removing a melanoma that otherwise would have killed him).  She raised four successful sons.  She had a great life with my father, also an MD.  She was very active, and hunted big game, fished, backpacked, hiked, did yoga, and even after she was confined to a wheel chair in her last few years she exercised and remained as active as she could be.  Her yoga instructor, Pam Quinn, worked with her to her last days.

Mom was fiercely in favor of women's individual rights, and hence had great contempt for feminism and its cult of collective victimhood.  She believed every individual should be self responsible, and hence believed in freedom.  She was libertarian (she voted for Ron Paul for president) and had no sympathy for anything that strengthened the power of the state and those who run it.  She especially opposed socialized medicine and gun control.

When I was five days old, Mom began reading aloud to me daily.  My father told me about this.  This is how one makes their children's brains develop, it's perhaps why I have been able to go as far as I have intellectually.  In Mom's last hours I read aloud to her (Dostoevsky's The Possessed).

My mother was not particularly sentimental.  She believed that when someone passed away, it was not an excuse for those remaining to slack off, and told me this.  She said we're supposed to keep at the business of living.

She is right.  I will miss her greatly.  All the more reason to work very hard in 2020 to make it a great year.

Photo: My mother with her signed copy of Larry Arnn's "Churchill's Trial."  She read it several times. If I were Greta's Guardian

One clear sign that leftists are insane is that they've latched on to Greta Thunberg as a spokesperson and icon.  This waif is uneducated, mentally ill, and suffers from autism.  In short, she's nearly the ideal representative for today's left.  ("Nearly" because she has some serious flaws... she's apparently female rather than transwhatevered, and even worse, she's white (horrors!))

There's been some excellent commentary on this silly girl and the preposterous phenomena surrounding her.  Kurt Schlichter has a fine analysis of this silly twit and the twits who idolize her.  As Schlichter puts it, "Clearly Greta Thunberg is being exploited by her cynical puppetmasters, but equally clearly she’s a tiresome, bizarre Marxist scold whose exploitation of the hapless dummies who buy into the climate change hoax is part of what is an increasingly violent plot to undermine capitalism and freedom. Recently, the cretins at TIME, which shockingly still exists in 2019, named her 'Person of the Year.' That’s appropriate, since 2019 has been a very annoying year."

Schlichter continues: "Now, Greta clearly believes all the silliness she is regurgitating, and she will certainly be sad when we ignore it. And that’s too bad. Her feelz are utterly immaterial. In fact, the sadder she gets, the freer we are."

"In a general sense, I hope that Greta someday liberates herself from the clutches of the people exploiting her naïve credulousness in order to take our freedom and dollars. But in a more specific way, I could not care less what Greta thinks or feels. And you shouldn’t either."

This raises (at least for those with too little else to think about) the question...what would it take for Greta to liberate herself?  I put the entire staff of the Unforeseen Contingencies Waif Salvation Department on this question, and they concluded the following.  Greta needs a guardian, and here's what he ("you," they told me) must do.

1. Make her eat meat.  She's a vegan.  She's sickly and physically damaged.  She's needs bacon and eggs in the morning, and half pound cheeseburgers at lunch and dinner.  Lots of ketchup (rich in lycopene and Reagan's favorite vegetable).  She needs protein and fat, stat!  Give her a multivitamin, too.

2. Start working out.  After a few weeks of decent food, she'll start to come alive.  Once her frail body starts to recover, she needs to run; a brisk two miles a day, five days a week.  She also needs to lift weights and swing kettlebells.  Not heavy (unless she really gets into it and wants to go heavy), but she needs to be functional and strong.  Good nutrition, oxygen, and general physical fitness will go a long way to improving her self-image and outlook on life.  She'll be on the road to becoming a normal, well-adjusted person.  She might even stop wanting to kill people.

3. Start learning.  Read good material.  Begin with Frederic Bastiat's The Law and Henry Hazlitt's Economics in One Lesson.  Then Thomas Sowell's Basic Economics.  Next she'll be ready for Bjorn Lomborg's Skeptical Environmentalist and Cool It.  After that, J. Peter Vajk's Doomsday Has Been Cancelled.  She'll start to be happy and excited about the future.

At that point, we at Unforeseen Contingencies will have done what we can.  It would be time for her to venture off on her own.  She'd need to be around sane, positive, nurturing people.  She should go someplace where they'll teach her about the importance of Western Civilization and individual liberty, our Judeo-Christian and Greco-Roman heritage, the importance of the Enlightenment and reason.  She should be around friends who will challenge her and support her, not people who exploit her for political gain.

Or... she can always stay with UC, and we'll train her to be an ultrarunner.

I suppose it's not impossible I'll become Greta Thunberg's guardian, but it's rather doubtful, just as it's rather doubtful she'll ever see this post.  But just in case... cheer up, Greta (and everyone else), the world is actually getting better all the time!

I've not been writing on this sordid tale, which seems endless in its duration and limitless in its disgustingness, but I should at least put in a word.  The Democrats began speaking of impeaching Donald Trump within one week of the election, before he had even taken office.  They've been jabbering about it ever since, going from one imagined crime to another.  Russia fell through, with the collapse of the Comey et al. attempt to frame Trump as being an agent of Putin.  Trump is the most anti-Russian president we've had.  I would say "since Reagan" except Reagan was anti-Soviet.  Now they've latched on to a phony "obstruction of Congress" charge, and "abuse of power."

The Democrat attempts to impeach our President are a genuine criminal conspiracy.  But first, let's look at the charges.

"Obstruction of Congress" is an idiotic charge -- one of the jobs of each of the three branches is to obstruct the other two.  Each branch is supposed to serve as a check on the powers of the other two; they are supposed to be competitive, not cooperative.  And what is it that Trump is alleged to have obstructed?  Answer: The Democrats' attempts to remove him from office.  The absurdity of the charge defies belief, as does the gullibility and voluntary stupidity of anyone who thinks such a charge makes sense.

"Abuse of power..."  The basis for this is that after Joe Biden bragged he threatened to cancel a promised $1 billion loan to Ukraine unless the Ukrainian government fired a prosecutor who appears to have been investigating his son's Ukrainian company for corruption, Donald Trump didn't demand that the Ukrainians investigate Biden, but by rearranging his words and cutting various parts and adding others, the Democrats can claim he did.  Again, the absurdity of the charge defies belief, as does the gullibility and voluntary stupidity of anyone who thinks such a charge makes sense.

Why a criminal conspiracy?  First, Obama's DoJ, including the FBI, were criminally conspiring to protect Hilliary and take out Trump before the election.  Conspiracy?  Consider the Strzok-Page texts, Comey's illegal leaks, the secret meeting between Obama's AG Loretta Lynch and Bill Clinton, the use of the fraudulent Steele dossier (no relation, BTW).  Remember that fact the Hilliary campaign hired Fusion GPS who had Christopher Steele develop a dossier from the Russians which Nellie Ohr (Fusion GPS) gave to her husband Bruce Ohr (asst AG, DoJ) and which the FBI used, knowing it was entirely uncorroborated and suspect, to obtain FISA warrants to spy on the Trump campaign and railroad people associated with him.  The FISA court now is asking for explanations.  Note that Donald Trump's phone call with Ukrainian President Volodymyr Zelensky reveals nothing inappropriate (unless we define inappropriate as "giving offense to Democrats") and Zelensky denies he was pressured in any way.  The call wasn't secret, in the sense that many government officials were involved.  The "whistleblower" was not a participant, which by law rules out "whistleblowing," but did work with Joe Biden and was in contact with Adam Schiff prior to any "whistleblowing."  Note too the bureaucracy retroactively changed the rules to permit this "whistleblowing" to proceed.

It's conspiracy, and criminal.

OK, sure, to be fair, perhaps it's a bit of a stretch to say this is all a conspiracy.  After all, Jeffery Epstein managed to have his suicide watch cancelled, his regular guards replaced, the temporary guards assigned to him fall asleep, the cameras in his cell turned off, and then kill himself by breaking three neck bones that normally only break when being strangled by another.