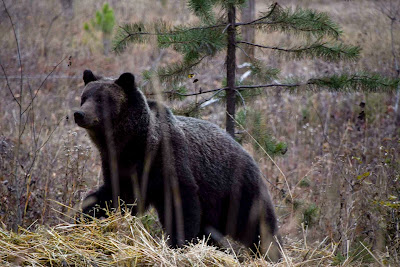 On Oct. 13 I completed my 17th Le Grizz 50 Mile Ultramarathon.  This one lived up to its name.

Lovely Julie and I flew to Montana for the 37th running of Le Grizz, my 17th.  (Somehow I've missed 20 of them.  Never again!)  Here's a race report.  We arrived in Kalispell MT on Thursday and settled in, buying supplies and doing a short trip into Glacier National Park for sightseeing and photography.  On Friday my good friend, fellow adventurer, and support crew member Jeff Ross joined us.  Friday evening we drove to Polebridge MT for packet pickup.  Less than a mile mile short of Polebridge we encountered on the road a rather large grizzly bear feeding on a bale of hay (photo).  Since we racers would be passing this point the next day, in the dark, my reaction was "Yikes!"  This would be the first time I carried bear spray in a race.

The next day at 5:00 AM our friend Marc Pittman arrived at our base camp, the Mini Golden Inns in Hungry Horse, in his one ton truck with super heavy anti-elk bumper.  In two vehicles we drove through GNP to the start at Polebridge.  I met met up with the iconic Pat Caffrey, who would be officiating the start.  There was an unusual number of runners doing the "Early Bird" start, an hour ahead of the regular start -- great! The probability the bear gets me is 1/n, where n is the number of starters.  The more the merrier.  Of course, that assumes the bear only eats one... or there's only one bear.  Assumptions, assumptions.

Caffrey fired the starting shotgun and we took off in the dark.  I ran with several different people, chatting with them.  When we approached the spot where the bear had previously been, there was a spectator parked, ringing a cowbell and cheering us on.  He confirmed he had chased off at least one bear before we arrived.  Yikes!!!

As we proceeded south on the North Fork Road, the sun came up.  It would be a cool day, varying between clouds and sun.  We hit the turnaround at ten miles and headed back north.  By now Jeff was with me on his bike.  I was running at a pretty decent clip and felt good.  As we approached Polebridge and the 20 mile point, I was running with a gal, Stacey D., whom I'd met at Elkhorn, with Jeff riding alongside us.  Another runner I know well, Tim M., was about 20 yards ahead of us.  Suddenly a very large grizzly jumped out of the woods and crossed the road I think about 20 yards in front of Tim.  Yikes once again!!!  We all drew our bear sprays.  Two spectators parked on the side of the road began yelling at the bear to get lost, and the rest of us behind Tim joined in (he later claimed he was petting the bear to calm it down for us).  The bear vanished in the ditch alongside the road.  We passed, carefully (I think it was hunkering in the ditch), and as we did the spectators called to us, "that was the second one, can you see where the other one went?"  YIKES! YIKES! YIKES!

But we didn't see another, and made it past without trouble.

Back at Polebridge and 20 miles into the race I was rather pleased with my time,and my legs felt good.  But my back was starting to hurt. We proceeded north of Polebridge, and I started feeling worse and began taking substantial walking breaks.  A runner from Spokane, Don P., caught up with me (he'd done the regular start so "catching up" meant he was an hour ahead) he was pretty talkative and we had a great discussion of running, training, health, and the like.  I really enjoyed it.  I also began to realize my back was a real problem.  He eventually took off and Jeff and I proceeded slowly. "Slow" defines the next 15 miles.  My back stiffened just short of cramping and hurt like crazy.  Marc was stopping every so often to set up an impromptu aid station, and I'd bend over, grab that big honking anti-elk bumper, and have Julie massage me, which helped some.  At one point, Janice M., wife of a fellow runner, was watching and suddenly said "get out of the way" and started working.  I started screaming; she's a professional therapist and hit the spots perfectly.  It was excruciating and boy did it help!  After that, I was able to run.  Not fast, but run.  Marc began running with me -- we were doing his "airborne shuffle" -- and we hit the turnaround and headed back for the last 15 miles.

The last 15 were intermittent Marc and Jeff, with Julie driving.  The three of them boosted me through it.  Towards the end Jeff had planned on driving to the finish, but realizing my state he decided to bike all the way in with me  At mile 43 he broke out a bottle of Jack Daniels and we each had a shot.  It's remarkable what a shot of Jack can do -- my back pain and Jeff's knee pain vanished.

As darkness fell, I actually accelerated, catching two runners.  I finished, greeted by the venerable Pat Caffrey, who took my finish line photo (below).  It was my slowest Le Grizz, but what a great time!

The next day we all met for breakfast with Marc and his wife, and then did an easy hike in GNP for photography and to loosen my legs. 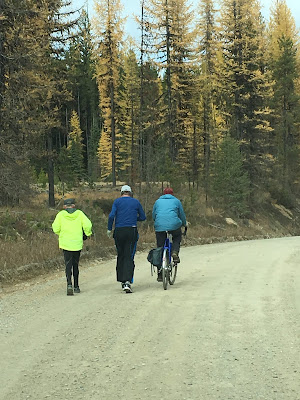 Me, Marc, and Jeff 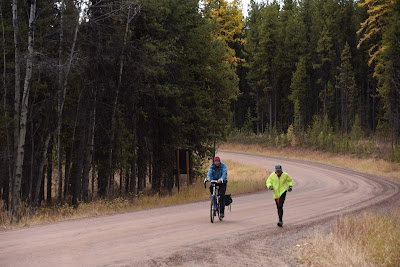 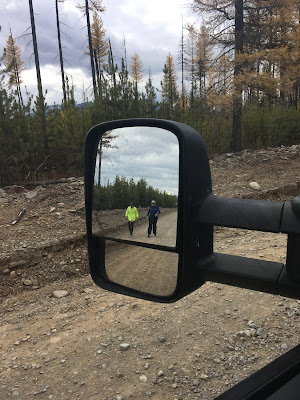 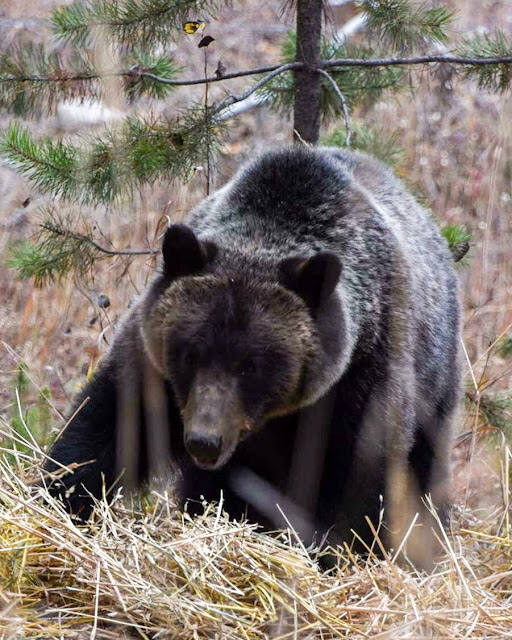 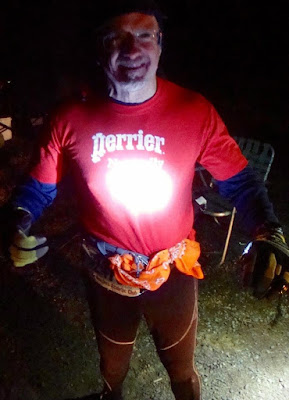 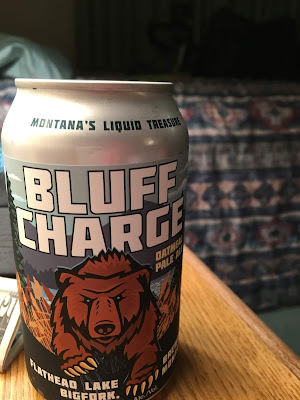 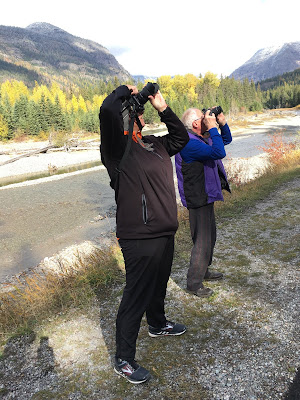 Julie and Jeff, day after 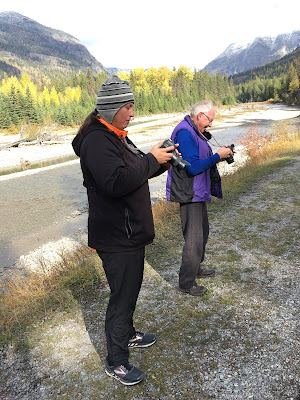 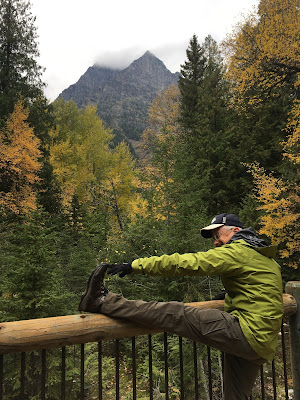 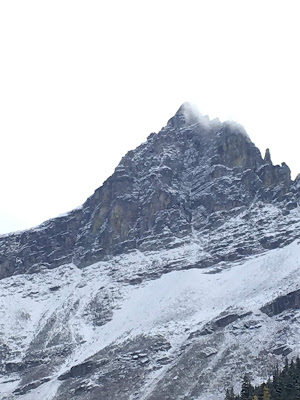 We do this kind of thing because it takes us to wild places, both physically and spiritually, where we feel and know we're really alive.