Trump, Putin, and what is *really* going on 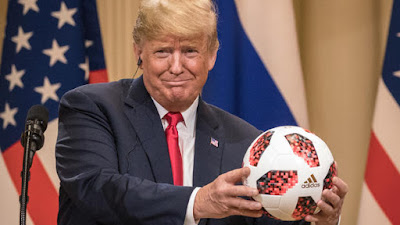 Nothing has done more to convince me that facts and reason are irrelevant to people's beliefs than watching reactions to the Trump Presidency, and there's no better example than the reactions to the Trump-Putin press conference in Helsinki today.  The reactions are outrage and hysteria.  Conservative Ben Shapiro called it "disgraceful."  A bunch of Republicans were incensed.  Democrats, as always, were insane, with traitor and oath-breaker John Brennan calling it "treason" and some random Democrat Congressman calling for a military coup against Trump.  (The Congressman should be arrested and charged.)

I carefully went over the entire transcript of the press conference.  There's nothing objectionable at all.  The vast majority of things people are complaining about are complete misrepresentations of what was said.  Quite a few of the critics seem to have wanted Trump to do something like condemn Putin and threaten him, or maybe just turn and punch him.  Instead, both Trump and Putin said they completely disagreed on a number of issues, and Trump denied -- understandably -- the utterly unfounded "collusion" charges.  It's shameful that this stupidity was even brought up, when it is obvious that the FBI leadership attempted to sway the election and then bring down the winner, and that the "collusion" claim is an artifact of this effort.  As for Russian meddling in the "election" (actually in the campaign, which is not the same thing), Putin shrewdly asked why it is that law enforcement rather than the judiciary gets to make the final conclusion on what happened.  Good point.

I don't trust the Russians, and I hate Putin, but all the current Russophobia is fake.  The current Russophobes tend to be the same people who, when Russia invaded Crimea, pretended not to know who the "little green men" might be, and when Russia then invaded eastern Ukraine, accepted the general refusal of Obama and other western leaders to provide weapons to Ukraine.  These are same people who were silent when Barack Obama canceled missile defense for Eastern Europe, and when he told Dmitry Medved to relay to Putin that he (Obama) would talk tough about Russia during the election campaign but afterwards be cooperative.  These are the same people who said nothing when Obama allowed Russia to effectively invade Syria and then claimed Russia eliminated Syria's chemical weapons, a claim that turned out to be a lie.  And when Obama's Iranian deal "went through" (somehow neither the U.S. nor Iran actually ratified it) Russia immediately began sending anti-aircraft systems to Iran, and allowed stepped-up Iranian involvement in Syria.  Few of Trump's critics cared about all that.  These current Russophobes actually don't care at all about Russia.  They simply want to get Trump and their claims that he's soft on Putin and maybe even Putin's agent make no sense at all.

Contrast what has happened under President Trump.
These are facts.  If a person notes them and still believes Trump is "disgraceful" or "treasonous" or a "Russian agent," they are beyond facts and reason.

And all this is crucially important.  For the first time, Putin is dealing with a western leader who isn't an unprincipled pantywaist.  For all his nice talk, Trump has been willing to get tough with Russia, including killing a few hundred Russian contractors.  There's one other tough leader Putin recently faced -- Benjamin Netanyahu, who happens to have a very strong relationship with the Trump administration.  It's hard to overestimate how important this is.  Everything I read from the Middle East suggests that Putin has agreed to sell out his Iranian ally.  In Moscow, Netanyahu drew a line, insisting Syria will not become an Iranian base.  Since then, Russia has acquiesced to Israeli air raids on Iranian and Hezbollah targets, and Iran is being crowded out of Syria.  This undercutting of Iran is crucial for non-proliferation and reducing risk of nuclear war.  Russian cooperation -- or acquiescence -- is crucial for this.

Trump's masterful foreign policy has energized the Saudis, who under MBS' guidance are reforming internally, explicitly weakening the Wahhabist Islamist influence, and deepening their connections with the Israelis.  The criminal regimes of the PA and Hamas are tottering, and with pressure from the Saudis, Egyptians, and Emirates, it's conceivable there could actually be some sort of peace deal.  The Iranian regime is likewise tottering.

How is it that people cannot see all this?  Instead, they are outraged that Trump didn't get into a spitting match with Putin at the press conference.  If you're playing hardball -- as Trump is -- there's no room for stupid gestures.

I've seen two good non-TDS analyses of Trump-Putin, and I highly recommend them.

The first is from American Thinker's Gary Gindler.  He argues that Trump dislikes Putin and is boxing him into a corner.  I think Gindler is right.  I've always said Putin has a very weak hand but plays it well against feckless Western leaders.  Trump is not feckless.

Not as serious but quite fun is Toni Williams' piece on Victory Girls Blog. She suggests Trump and Putin were in part trolling the press.  That's certainly true.  I particularly liked that Putin kept everyone waiting - a technique he regularly uses to dominate those waiting for him -- and that Trump beat him at the game.

But I especially liked Williams' comment that "Putin and Trump should have refused to come into the room until a few reporters with an IQ above that of hamburger showed up."  Of course, if they did that, we'd still be waiting for the press conference.

Comments:
One part of the press conference I found particularly interesting (and which got picked up by pretty much nobody as far as I can tell) is that Putin actually offered to allow the US to question some of their intelligence officers (with Russian officials present, of course) who may or may not have been involved in interfering in the campaign. However, he asked that in return, Russia be allowed to question US intelligence and law enforcement officers for interfering in Russian matters. Obviously, it'll never happen but it demonstrates the inherent hypocrisy of the US intelligentsia losing their minds over interference when that's been part of the US playbook for a long time.

I am afraid. Trump talked against European allies of the USA and then became over-friendly with Putin, the "strategic problem". And the problem is that everyone expected exactly this. We may not have been perfect allies, but it seems now that Poland's contribution to the Iraq War has been happily forgotten, and our men who were killed in that war have died for nothing. Russian officials claim that Trump agreed on a referendum to be carried out in Eastern Ukraine, Trump denies it. Why to believe him, after he keeps praising Putin and stating how much he hates freedom-loving Europeans? How do you interpret Trump's praise to the North Korean dear leader and his words that the USA does not need to defend "aggressive" Montenegro that may cause WWIII?

Is this true? Because from our corner of the free world it seems that its current leader has sold us all and is now feeding the crocodile.

I fear I am trolling, but what on Earth did Trump mean when he said that the poor relations between Russia and America were America's fault? This has been a favorite trope of Russians and their puppets since the Cold War. Pyjama's Media is justifying this by claiming that it was wrong of the USA to allegedly orchestrate a coup in Ukraine. Reagan must be spinning in his grave!

Thanks for these comments.

But Maya, I cannot understand your points. Europe has been abandoned and Trump is feeding you to the Russian crocodile? What's happened? Give me an example. How is Russia now eating Europe? What are you talking about? And while you are at it, give me even one example of Trump saying he hates freedom-loving Europeans.

In fact, Germany has -- for some time -- been betraying Europe to Russia. Gerhard Schroeder was pro-Russian when Chancellor, promoted Russian foreign policy with respect to NATO expansion, and was rewarded by being made Chairman of Rosneft, the Russian state petroleum monopoly. As Chancellor he developed, with Putin, the Nordstream project, for shipping Russian gas directly to Germany, and after he stepped down he became Chairman of Nordstream as well. The Nordstream 2 project would send gas directly to Germany, bypassing Ukraine, a weak link for Russia. Angela Merkel is also promoting Nordstream 2. What great allies.

Germany has failed to live up to its NATO commitments. Trump was right to take them to task for this. The German military is a basket case. According to the Germans, none of their submarines and none of their large transport aircraft are operational. Only 50% of their heavy tanks work, and fewer than 50% of their fighter aircraft are in combat order. Maybe we should be happy about this, given the historical record of Germany when well-armed.)

I hope you are right about Trump and Russia. In fact, there is strong evidence that you are, and it is that, despite Trump's hints that the USA may stand by if Russia attacks small European NATO countries, Russia has not attacked (not yet, at least). The comment about Montenegro made me crazy! During my youth, my country was cut off from Europe by the Yugoslavian wars, and the news emissions were a catalog of massacres, and all this because the West decided to abandon the freedom-loving people of former Yugoslavia.
I fully agree about Germany. Throughout its modern history, this country shows a remarkable urge to harm others combined with inability to sustain democracy. To be honest, I am glad that the German military is in such a dismal state. If Germany was well-armed, it could use its military might to force its self-inflicted immigration disaster on other EU countries, and maybe to prevent them from leaving the EU.

I think it's a mistake to take Trump's offhand comments literally. It seems to me he uses offhand remarks as weapons, to influence either supporters or opponents.

Re Germany... to me, Germans seem to be devoid of principles, except when they have fits of passion and bring us political philosophies such as Marxism and Nazism. They are the children of Kant and Hegel. I think that explains a good deal of their craziness. You may well be right about the German military. Instead of building theirs up, perhaps they ought simply pay others to defend them.