4th of July and American exceptionalism 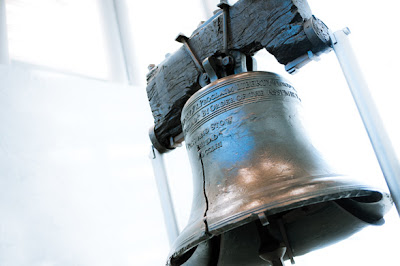 I realize most of my readers aren't Americans, but bear with me. I was reading one of the leading academic historical journals recently, and came across a short piece introducing a symposium on "the question of modernity." The main point I gleaned from it is that modern historians work from the foundation of a philosophical morass, with no clear, coherent framework for analysis. (The essay observed that Marxism -- economics' equivalent of young earth creationism -- had been popular but now they'd moved on to other fads.)

I strongly disagree... and it is historically inaccurate, as well as politically dangerous, to ignore what is exceptional about America. Here's something that sums it up well:

[H]ere in this land, for the first time, it was decided that man is born with certain God-given rights; that government is only a convenience created and managed by the people, with no powers of its own except those voluntarily granted to it by the people.

Fundamentally, there are only two ways of seeing the relationship between the individual human being and the state: the traditional one is that the state is superior to the individual, who must be subservient to it. In the old monarchical setting, this simply meant being a subject of the king (l'etat, c'est moi). In more modern forms -- socialism, communism, fascism, the modern welfare state -- the state plays the role of a parent, and the citizen the role of the child, who is to be cared for cradle to grave (and in the latest thinking, "nudged" in the "right" directions).

The alternative view, the truly revolutionary and radical one, is that the individual is sovereign, every individual, and the state only a means to the end of defending this sovereignty. The state is subservient to the individual. This view is the explicit basis of America's Declaration of Independence. It is the basic founding principle of this country, but it is far more important than that. It is a fundamentally different way of looking at society and government. And if civilization is to have a future, it will be based on this. It is the only principle that can limit the growing power that civilization gives us, and limits it in such a way that we do not self-destruct.

Americans have not consistently followed this principle, and have permitted too many exceptions to this exceptionalism (any exceptions are "too many"), but that's no reason to deny that there's something different here. Humans almost never do anything perfectly, and particularly when they do things together. Americans have applied this founding principle very imperfectly, but they have applied it, and it has shaped the world into a very different place.

I don't know whether we will preserve this principle, our exceptionalism. Left-liberals have abandoned individual rights for "human rights," i.e. entitlements granted by the parental state. Conservatives have abandoned it for the strange doctrine that America is simply God's chosen country, automatically moral by definition. If we give it up, who will defend liberty as the fundamental political value? The Chinese? The Europeans? The Indians? The Russians? hah! That's why America matters, and why America's exceptionalism is something to protect and nurture, not deny or mock or twist.

You don't have to be an American to appreciate the principles of the Declaration, or to celebrate its signing.

Note: the quotation is from an Independence Day speech given by Ronald Reagan. You can read the whole speech -- it's short and sweet -- here in this post by Buz Mills of Gunsite Ranch.