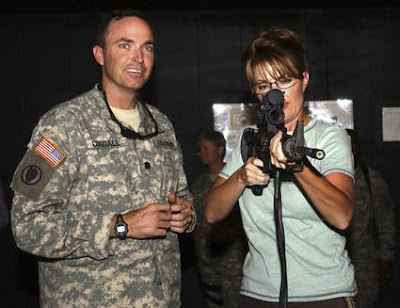 I still don't know what to make of Sarah Palin. At least she can shoot.

I was astounded when McCain announced his decision (or rather, when it leaked), and still am. I was dimly aware that Alaska has a female governor who courageously took on crooks such as Alaska Senator Ted Stevens. From what I've been able to learn of her, I "kinda" like her. She's no libertarian, but seems a fairly reasonable sort of rural western conservative, like many people I know in Montana and Wyoming. Unlike Obama, Biden, and McCain, she doesn't seem to favor disarming the American public, reason enough to kinda like her. I wouldn't have predicted her to be the pick with a million guesses, but then, none of the "likelies" seemed very likely either.

But why choose her? It makes no sense whatsoever to me, if McCain's goal is to win the election. She has no name recognition, little experience (but see footnote), and, so far as I can tell, has positions only on what seem to be Alaska state issues. So why Palin? She won't attract votes from Hillary's angry supporters; they may be batty enough to hate Obama (even though he's almost identical to their Hillary in political positions), but they still won't vote for an anti-abortion conservative. McCain must know that.

When I try to guess the logic of all this, I start coming up with nutty things like "maybe McCain is resigned to losing, and is just doing this to give a fellow maverick's career a boost." OK, so I'll punt on "why Palin?" and make the following prediction:

Barack Obama is going to win the election by a landslide. I've thought this since July 4 of this year, when Obama returned to Montana to campaign. No presidential candidate ever campaigns in Montana; the three electoral votes can't conceivably matter. But ironically, by virtue of everyone else moving their primary up to "make a difference," Montana's primary came last this year, and for the first time everyone campaigned there. But Obama keeps coming back. Why? The electoral votes won't influence the outcome, but Obama believes he can win in a number of supposedly "red" states. He's not campaigning to win a close election, he's working to win by a landslide. Certainly it's what he believes; if he didn't think so, any efforst in places like Montana would be utterly senseless. But Obama knows he is better funded than McCain, he's better organized, and he has on his side the worsening economy and the general public disgust with Bush and the Republicans. I think Obama thinks he can crush the Republicans.

And now McCain has selected an unknown running mate from a state with no political importance who will be quickly dismissed as unqualified. His campaign isn't going to take off. I predict a crushing defeat for McCain, and for the Republicans in general, as the Democrats win the Presidency and both houses of Congress. Yikes! There goes the gridlock I love so much.

Footnote: As the Bush administration has amply demonstrated, "experience" is neither necessary nor sufficient for doing a good job, whether it be the U.S. Presidency or any other task. In fact, "experience" can even be a disqualification, since for most politicians it's short for "time spent in office damaging things and fleecing the public."

He's AWOL in the defense of our liberty. Bill Clinton tells us that Barack Obama will uphold the U.S. Constitution. Take a look at this post on Classically Liberal to see what "upholding the Constitution" means at the Democrat Convention.

Don't expect anything better from the Republicans. The photo and videos are pretty shocking stuff, but this sort of thing is really an invention of the Bush administration. And unfortunately, McCain gives every sign of continuing the policy.

So much for freedom.

Even Владимир Владимирович has his soft and cuddly side 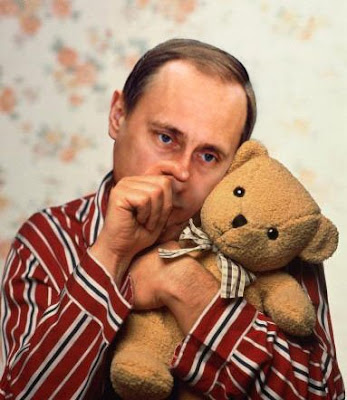 But who is that with him? 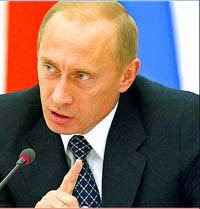 Mikhail Gorbachev writes that Russia was forced into fighting Georgia, and that it is now being victimized in the western press. Thomas Friedman concurs, and pins ultimate blame on the west.

Nonsense! Friedman has no idea what he is talking about. It’s unlikely Gorbachev is ignorant, which suggests that he’s, well, lying. Kommersant (not exactly a western news source) pointed out that Georgia offered a peaceful solution to Abkhazia in June that would have made the region autonomous, with most of it a Russian sphere of influence. Kommersant also documented increased border fighting, including attacks on ethnic Georgians, and on Georgian border troops.

But while we’re at it, what about Russia’s preparation for war? For people who supposedly don’t want war, Putin and his little stuffed bear certainly seemed well-prepared for a full scale invasion of Georgia. Kommersant points out that in July, Georgia was warning that Russia was moving offensive forces into the region
(rather than defensive units).. I think it is clear that Saakashvili was goaded by the Russians into his foolish attack. But on the other hand, it’s primarily hindsight that makes sitting by doing nothing seem like a good idea.

Big picture: The West has had much less influence on Russia than Friedman imagines. Yeltsin picked Putin, and in doing so guaranteed that the siloviki would come to run the state. And Yeltsin's selection of Putin was based on domestic politics; there's little the West could have done differently.

As for Gorbachev’s "the west just doesn’t understand us..." Under Putin, Russia has lost much of its press freedom, Moscow has seized control of the states, political opposition has been essentially eliminated, an attempt was made to rig Ukraine’s 2004 presidential election (a botched attempt, happily) and the state has "seized the commanding heights of the economy" by destroying Yukos and effectively seizing the property of western investors. I think many mistakes have been made in the west re Russia, but Russia is run by the Russians, or, at this point, by Putin and his security cronies. Russia’s nasty turn isn’t the fault of the west.

Siloviki shills at the "Mises" Institute

Putin extends his occupation of Georgia. I just listened to a BBC radio reporter who observed Russians sinking captured Georgian ships in the port of Poti. (I believe this was Richard Galpin, the reporter mentioned in this article.)

Human Rights Watch has documented the Russian use of cluster bombs against civilians.

Meanwhile, the "Mises" Institute continues its defense of Putin. Variously, the "expert scholars" at LVMI have argued that the Russian invasion is 1) a neocon plot, 2) a response to an American and Israeli plot, 3) a reasonable Russian defense of the rights of Ossetian and Abkhazian self-determination, 4) a Republican plot to get McCain elected and 5), from Thomas Dilorenzo, a civil war.

("Civil war???" So Dilorenzo believes Georgia and Russia are a single country? I hardly know what to say, other than that the USSR is dead, thank God.)

Adding to the mess, the Russians now have now offered Poland the threat of a nuclear strike. After all, the anti missile defense Poland now will accept obviously is directed at Russia (are the siloviki thus confessing that they were indeed already contemplating firing missiles westward?) I wonder how long it will be before the "anti-war" "libertarians" of the LVMI condemn General Nogovitsyn's naked threat, the Russian occupation of a neighboring country, and Russian attacks on unarmed civilians. I'll not hold my breath.

Eugene Volokh has some excellent analysis of the crisis, as well as of issues of seccession. Among other things, he analyzes reasons for the seccession of America's slave states , and gives lie to the claim, oft repeated by the neocon-federates of "Mises" Institute, that it wasn't about slavery.

(Note: I didn't link to the LVMI posts, but will send some to anyone who wishes to see them.) 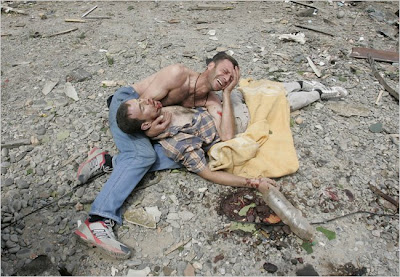 A scene from Gori, Georgia, after Russian bombing.

UC is back (but so is the USSR)

"We" at Unforeseen Contingencies are back! ...and ready for action.

My summer hiatus included a self-imposed news blackout... or at least, I didn’t follow news too closely. In place of news, I focused on Montana’s high prairie and mountains, and I can’t say I regret it. I’ll likely post a few photos soon. But first, the Russian invasion of Gruzhya (Georgia) is screaming for comment.

The general line in the U.S. press seems to be that Saakashvili went too far and provoked the Russian siloviki into attacking. Most of the experts and commentators on NPR’s various news shows have taken this line. But in fact, the Russians began "softening up" Georgia, via cyberattacks, well in advance of the Georgian advance into South Ossetia, as this Unian story makes clear. It’s obvious that these attacks were on behalf of the siloviki government; the idea that criminal gangs did this on their own is silly. Criminal gangs don’t waste effort on endeavors that don’t pay.

The Russians ought to be made to pay a high price for this brutal aggression. Unfortunately, America has lost its moral authority, is militarily overextended, and broke (thanks George). Western Europe is chicken. Eastern Europe is too weak to do anything. So these Russian сукини дети are getting away with murder, ethnic cleansing, and the destruction of liberty and independence in Georgia. Freedom is the rest of the FSU is threatened, and the Soviet, er, Siloviki, client regime of Iran is no doubt emboldened.

Analysts are quick to point out that in fact there is little the West can do. What??? How difficult would it be to do a "Rainbow Warrior" on the Moskva? For that matter, the USN is perfectly capable of sinking the entire Black Sea Fleet. This ought to be done; better such a defanging than leaving the Russian regime unscathed and ready next to destroy Ukraine’s independence. [Quick, see Footnote One.]

Ah, such reverie. well, at the least, why can't we return to the G7? Putin and co. have no business here. They are thugs, and civil discussion is beyond them. They understand strength and force, and little else. An early punishment would have a salutory effect. Putin ought not get away with this crime, and kicking them out of civilized circles would be a start.

The real danger, and importance of this issue, is this: the Siloviki are cobbling together an anti-American and anti-Western Eurasian alliance, one that includes Iran and China. Such an alliance would be fundamentally illiberal and destructive of civilization - on the wrong side of the 0 to 1 Kardashev cusp. But unfortunately, the West seems unwilling to do a thing about it.

Footnote One: after being taken to task by Nathalie Vogel, I hasten to add this is poorly written and not what I was really trying to say. The situation does not warrant war, and I don't seriously believe the West ought to be sinking the Black Sea fleet. I suppose I could rewrite this post, but don't want to be accused of Stalinist "airbrushing." So I'll just leave it and admit I misspoke (OK, OK, Nathalie, I surrender, it's a dumb comment.)

Footnote Two: Comrade Putin’s lapdogs at the "Mises" Institute are yapping to defend the Russian aggression. здесь , здесь, и здесь. Note that these intellectual thugs term the Russian invasion of Georgia a "civil war" (in the second link).

Comrade Lew has been a friend of Putin for some time, so it’s no surprise. I guess the invasion is another "great sign that Russia is moving toward more freedom." Ugh.