More scenes from the Whites!

Mats strides up Lafayette into the sun, and a line of us moves along the ridge towards Mount Lincoln. (Photos by Tim Seavers. Left click on any photo for a better view.)

To my surprise and delight, New Hampshire’s White Mountains are the equal of some of my favorite ranges in Montana. They are not as high in altitude, but they stand 3,000 to 5,000 feet above the low spots, and they gain this height quickly. They’re rugged and gorgeous and dangerous if not respected – all things I love.

I had a great time training with Mats, did lots of miles, lots of vertical feet, earned some rather dramatic blisters, and generally enjoyed it all. Also met a number of tough New England "hikers" with whom we hiked. (Why the quotation marks? "Hiking" to these people seems to require crampons and an ice ax at minimum – this isn’t casual strolling in the glade!) These included Tim Seavers (current record holder for speed ascents of the 48 peaks above 4000 feet), Frodo (past record holder), Drewski (one of a handful of people to have summited all 48 in one winter) and Albee (another likely record setter). (These are their nommes de net from the Views From the Top site.)

While it might sound like a lot of focus on records, it isn’t – like all ultra experiences, it’s about friends, mutual support, and awe inspiring esthetic experiences. I felt very privileged to share trails with these people. It was a great experience.

For your viewing pleasure, the photo is of me and my red gloves, ascending Mount Lafayette, on the Franconia Ridge.

Photo by Tim Seavers. He’s a professional, as these show. His site is worth checking out.
And now, back to work! 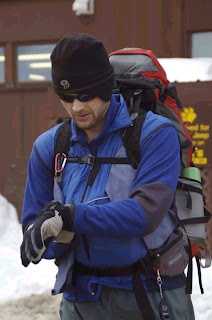 Michigan is too low and too flat for my taste, and I am overdue for a little more altitude and steeper slopes. I’ll be joining my climbing an adventure partner, Mats the Crazy Swede Roing in New Hampshire’s White Mountains for a few days of training. Mats just finished his attempt at the winter speed record for the 48 summits of the Whites. He was on track for the record until late storms blew him off the mountains. We’ll be doing some of the peaks he missed, maybe some ice climbing, or slush surfing, or whatever conditions present us. This is all prep for our planned attempt on the summer record in July. And whatever we do it will be fun!

Preparing for the Next Disaster: the Wrong Way

President Bush has taken another photo op tour of the areas hit by Katrina. Tornadoes pound the South. The discussion everywhere turns to subsidizing rebuilding. What will government do to aid the recovery?

The question is all wrong.

There doesn’t seem to be a shred of intelligent discussion on the topic; it’s taken as a given that government should provide long term recovery aid, and the only issue is how much. Well, there are two serious problems with bailouts: a moral one and an economic one. Both of these are closely intertwined, and once one understands them, one realizes that aid for recovery is investment to maximize damage over the term. And one realizes that this is a case where government officials really are maliciously and knowingly making things worse.

The moral argument: why should Ms. A be forced to pay for Mr. B’s misfortune? The usual argument is that Mr. B’s misfortune was an “act of God,” and that it’s only fair, since Ms. A has a similar right to help from Mr. B should she ever become a victim of a random disaster. Recovery aid is “just like insurance.”

But aid isn’t “just like insurance,” not even vaguely. Disaster aid is simply a transfer from A to B. It’s unclear why B should have any right to a share of A’s wealth, just because of misfortune. What’s so fair about this? To put it in perspective, why is B’s need considered more important than A’s property rights, or A’s needs for her own wealth? Presumably A has needs as well – by what moral calculus was B’s need to A’s property determined to preempt A’s rights and needs? (The obvious answer: it’s determined by the political economy of rent-seeking and vote-seeking.) For those who think need trumps all, did someone stop to check what A’s needs might be? Perhaps Ms. A is a single mother trying to raise children and put herself through college, while scraping by on what she can earn? (I’ve had a number of students in my classes whom this describes perfectly.) Is Ms. A’s husband out of work, battling cancer, while Ms. A works multiple jobs and goes heavily into debt trying to hold things together? Or for that matter, is Ms. A simply living a normal life, pursuing happiness and paying her own way as she does so? The phony “moral calculus” used by advocates of the “fairness” of damage reparations is rarely framed in these terms, since it’s always just “the government” or maybe “rich fatcats” who are supposedly paying.

Obviously, no such moral calculations are made. If they were, it would be obvious there’s no standard by which B’s “need” trumps everyone else’s rights and needs to their property, other than arbitrary assertion. Well, I exaggerate – the standards “this will buy us votes” and “hey, this is a way for me to gain at A’s expense” aren’t exactly arbitrary.

The economic argument: what are the effects of this koo-koo moral argument? The effect is to destroy incentives on the part of potential victims to take measures that could minimize their exposure to damage in the future. To the extent reparations are made, the incentive to protect oneself is reduced. Here’s the obvious difference with insurance, since with a properly designed insurance program the premiums reflect risk, so that the insured retains incentive to take actions that reduce risk. Hence, paying bailouts encourages behavior that will maximize the damage next time around.

Everyone knows this, everyone knows that New Orleans is at higher risk of catastrophic disaster than Des Moines. If people in Des Moines must pay when people in New Orleans are damaged, what incentive do New Orleanians have when rebuilding? Whatever it is, it isn’t to minimize the exposure of the poor people of Des Moines. Reparations create incentives to rebuild in ways that increase risk and of future damage. Why take costly measures to minimize your exposure when you know someone else will be forced to bail you out if things go awry?

Since everyone knows that damage reparations and rebuilding subsidies have these effects, the proposed remedy is a kind of central planning, where “experts” decide who may rebuild on their property, who may not, what can be built, and what cannot. This exponentially raises the harm done, as it effectively cancels whatever property rights Americans still have. It’s ironic, but not surprising, that the direct harm is being inflicted particularly on poor black people, largely by white environmental and land planners. But we all suffer from the indirect harm when property rights, the fundamental basis of “human” rights and of the market, are systematically turned into grants of government permission.

So here’s the bottom line about taxpayer-funded damage reparations. They’re immoral, they set citizen against citizen, they create incentives to build in ways and places that will make future disasters even more costly, and they create incentives and arguments for bureaucrats to “remedy” the situation by taking away our rights.

OK, but what’s this about government officials “knowingly and maliciously” making things worse? These ideas are pretty well understood within government. Interestingly enough, bureaucrats within USDA have even argued that disaster payments in agriculture ought to be eliminated for the reasons I describe here. (These people aren’t all evil, it turns out!) But for whatever harm it creates for the country in the long run, disaster reparations do benefit recipients, and even more so their elected representatives. If doled out skillfully, disaster aid does do wonders for the careers of politicians and bureaucrats involved. This lesson isn’t lost on them, and hence, don’t expect to see any intelligent discussion on this issue.

I would think post-science has something to say on this issue, since it so directly considers the future values of assets under alternative policy regimes and states of nature.