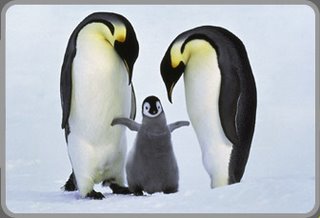 It's foolish of me to think I can have a penguin story without a penguin picture. Penguins challenge (and I think surpass) koalas and kittens for sheer cuteness, and any mention of penguins that doesn't include an actual penguin, or at least a picture of one, will disappoint.

So here it is.

"Happy Feet" is making quite a stir among some conservatives. For conservatives, references to environmental problems are politically incorrect (if not out and out violations of the PATRIOT [sic] Act), and the little penguin in the film makes references to declining fish stocks worldwide, an ad allegedly global warming as well. The mere mention of these things has put conservative reviewers into a tizzy, more "evidence" of the supposed "liberal bias" across media. (It also upsets them that there's "propaganda" in the film...an objection that didn't seem to arise when "Passion of the Christ" was being reviewed.)

The problem for conservatives is that the depletion of fisheries around the world is a genuine problem, and it is entirely caused by humans. Global warming is also a fact. I’ll agree that anthropogenic global warming is not well established, but a variety of evidences show that earth is in a warming trend, evidence that includes not only temperature measurements, but the general shrinking of glaciers and polar ice caps, and analysis of ice cores from drilling in Greenland and elsewhere.

I don't have much to say about global warming at this juncture, but I do have something to say about the depletion of ocean fisheries. The basic problem is that fisheries are largely open-access commons. The only way to establish ownership over a fish is to catch it. An uncaught fish has, in effect, no value to anyone, even though uncaught fish are the only means by which more fish are produced. There's no such thing in an open-access commons as saving some fish for the future. If I am a fisherman, any fish I save by not catching it is available for anyone else to catch, so I might as well catch it and get the value for myself. Overfishing is the result, and it is extremely common.

Imagine for a moment that the only way that a cattle rancher could establish ownership over her/his cattle was by killing them. Live cattle would be anyone's for the taking. The number of cattle would plummet to zero almost overnight. Open access fisheries create exactly these incentives for fisherman. The only reason these don’t result in fish extermination is that fish are relatively hard to catch.

There's a very nice solution to this problem - ITQs (Individually Transferable Quotas). These establish private property rights over fish in the water, rather than fish caught. These give a fisherman ownership of uncaught fish, and a fisherman can save these fish in order to preserve and build the future population. Where ITQs have been tried (e.g. Canada, New Zealand, Australia) they have worked extremely well, and led to bigger fisheries, more valuable catch, lower fishing costs, and happier fisherman and fish consumers (and perhaps happier fish).

ITQs ought to be used worldwide, and in international waters. Of course, developing international ITQs would require things that all good conservatives oppose: friendly international negotiations, resulting in treaties with some sort of means of enforcement. It would also require admitting that there are limits to certain kinds of resources, and that conservation might be a good idea in some cases - there might be more for us to do than be fruitful and multiply so we can "subdue" the earth. (I note Gen. 1:28 also mentions replenishing the earth, but as I am no Bible scholar I must defer to the experts who assure us that conservation is an evil liberal doctrine, no doubt of Satanic origin.)

The conservative position is unfortunate, because ITQs represent a positive sum game that the world could play, and one that would publically demonstrate the good effects of private property rights. Development of ITQs around the world, at the national and international levels, would be a very positive development for world prosperity and peace.

In getting uppity about the absolutely correct observation that humans are depleting world fisheries, conservatives defend a property rights regime closer to that of collectivism than capitalism. Whether they realize it or not, the little enviro-penguin is endorsing private property rights, while conservatives are defending a communal property structure appropriate for an isolated band of hunter-gatherers.

I guess that's why they call themselves "conservatives."

[Note: I think this may be my final post on the Bush administration. The topic is depressing, and about all I can say is "I told you so." And these ducks seem not just lame, but quadriplegic. So unless there's some new development, such as a war on Iran, or an impeachment, I'll avoid this sad topic in future.]

The disastrous military and foreign policy of President Bush has run its course. Bush has brought the United States to defeat in both Iraq and Afghanistan. The events are still working themselves out, but defeat is assured. No aspect of this is a surprise at all; every bit of the disaster was predicted well before the invasion of Iraq.

The Bush-Neocon "strategy" was insane from the start. In Afghanistan, they believed it wasn’t necessary to follow through against al Qaeda and the Taliban, they cut military strength and shifted it to Iraq, they failed to deliver promised aid and reconstruction – leaving Afghanistan a shambles, and a leaving dangerous enemies free to reorganize. In Iraq – which was not a terrorist threat – the insane notion was that a quick toppling of Saddam Hussein would be followed by establishment of pro-American popular democracy, where the people would gratefully repay America with a flood of cheap oil, and serve as an inspiration to all of their neighbors, who would follow in their footsteps and establish liberal democracies.

Now the U.S. Army is completely tied down in two no-win disasters, Afghanistan and Iraq are both completely destabilized, radical Shiites – especially in Iran, and Hezbollah as well – have been empowered beyond their wildest dreams, and America’s allies – well, most people rightfully look at the United States as something of a rogue nation. The defeat is certain. Events haven’t finished running their course yet, but there’s no averting defeat.

The only real hope now is that the United States get rid of the Bush administration (hopefully before these criminals start an insane and suicidal 4th quarter "Hail Mary" war on Iran), confess our sins, and beg the rest of the world for forgiveness and help.

Hahaha – fat chance of that. What will happen, I think, is the following:

1. America will leave both Afghanistan and Iraq. Afghanistan will revert to a Taliban stronghold, and Iraq – after a period of horrible bloodletting, will fall under control of some new strongman, a Shiite this time, and hopefully one who isn’t too anti-Western. Al Qaeda and radical Shiites will be strengthened, and will be pressing hard to expand their power in the region. All of this will be a terrible blow to genuine pro-freedom reformers in the Middle East, tragically, although perhaps other Middle East regimes will begin taking the initiative in opposing Islamic fundamentalism.

I don’t think anything can avert this overall scenario. It is already too late.

2. America will retreat from the field, and find itself in an economic debacle as our irresponsible Federal deficits begin taking their toll. The scapegoat for this debacle will be free trade in general and China in particular, and America will go into a period of economic isolationism. All of this might be averted, but it would take a combination of fiscal responsibility and international economic diplomacy, and I see no American politician with either the intellect or the moral strength for this. (Memo to Republicans: economic diplomacy means friendly cooperation and coordination – with China and with "old" Europe). Instead, we are likely to get greatly increased economic intervention, a stronger welfare state, and protectionism – all of which will reduce America’s economic strength.

3. The net effect of these two points will be an American decline. American power will be eclipsed, to some extent – not eliminated, America will remain a superpower. But America will no longer be the sole world hyperpower. America will emerge weakened economically, militarily, diplomatically, and at home, politically, as we suffer from reduced liberty.

Very bleak, no? I think this is the darkest that things have appeared in the post-Soviet era. The shambles has many sources, but it is most attributable to the administration of George W. Bush, and American conservatives in general, and was mostly avoidable. Still, this isn’t pessimistic, but just realism. These points are simply the likely implications of the following unquestionable facts: (1) The military interventions in Afghanistan and Iraq have failed, and U.S. land power is strained and depleted. (2) American soft power is essentially gone, thrown away. (3) The American financial position is very bad. So this isn’t pessimism, just realism.

Let’s just hope that Bush-Cheney don’t start another war before they go by attacking Iran, something which might well cause the entire Middle East to descend into war (and possibly a world war). And that there’s no major terrorist attack in the U.S. soon, since the Republican framework for a full-blown police state – e.g. the PATRIOT (sic) Act – will be used fully at home.

I’m guessing these won’t happen…so, in fact, my story above – this is optimism!