I’ve returned from a quick visit to Kyiv, Ukraine, where I was a guest at the 10th Anniversary Conference and celebration of the EERC MA Program. EERC – the Economic Education and Research Consortium – is an independent western-funded program within Ukraine’s National University Kyiv-Mohyla Academy. I think it’s safe to say this program (in which I used to teach) has been extremely successful in promoting good economics. A number of our students have gone on to complete PhDs in economics, including several from U. Michigan and Michigan State University. Some are back in Ukraine teaching, others are working in Ukrainian ministries and private firms, one even has a position in Aumann’s Center for the Study of Rationality in Jerusalem.

On my arrival in Kyiv I was picked up by the driver from the program and taken to my hotel in the center of town. Immediately I sensed something wasn’t quite right – looking around Maidan Nezalezhnosti I saw men in kilts everywhere. What, did Scotland invade? As it turned out, yes, indeed Scotland had invaded, or Scottish football fans, at least. Scotland had played Ukraine, lost 2-0, but the Scots seemed to be in fairly good spirits – they all had praise for the high quality and low price of Ukrainian beer, and seemed to be enjoying themselves immensely. And the Ukrainians seemed happy enough to have them wandering around.

The opening of the conference featured Francis Fukuyama and Robert Engle as keynote speakers. As I approached the conference venue, I noticed a small group (50?) of, umm, students? gathered, waving Che flags and homemade signs that said, in English, "Capitalism must die!" Apparently they had tried presenting Fukuyama with a copy of Marx’s ""Das Kapital," but were instead mocked by one of the Ukrainians escorting him: "we don’t need to read about Marxism – we lived that bullshit."

The interesting thing to me, aside from the peacefulness of the group (of personal interest as I had to walk amongst them to enter the conference) was the Che flags. Che wasn’t and isn’t a CPSU icon. The old communists (who were out in force the next day protesting some obscure Ukrainian issues) don’t wave Che flags. These are some new kids on the block, and assuming they are actually Ukrainians, I suppose they are trying to position themselves as Ukraine’s left once Ukraine joins Europe, supplanting the old Soviet dinosaurs. I am guessing they haven’t much appeal.

Inside, Fukuyama gave a very interesting talk with great-sounding big ideas that, once you look at them carefully. make little sense – but interesting anyway. Engle’s talk didn’t make much sense to me, but the next day he repeated it, but without omitting the technical details and omitting all the photos of him receiving the Nobel, and it proved to be pretty good.

But most interesting was the announcement that EERC is becoming the independent (of NaUKMA) Kyiv School of Economics and greatly expending its programs. How can this be, since budget issues were always a major constraint? Easy – The Viktor Pinchuk Foundation is bankrolling the expansion. Oligarch Viktor Pinchuk? Ex-President Kuchma’s son-in-law? Partner of Rinat Akhmetov in the first Kryvoristahl privatization deal, the corrupt giveaway that was eventually overturned? Yes, that Viktor Pinchuk (he’s the one who told off the Che supporters, it turns out). Economics makes strange bedfellows.

Far be it from me to judge anyone by their sources of funding. So long as the economic work of the program remains independent, this is a fine thing. In the topsy-turvy world of Ukrainian politics, where the everyone’s stripes seem to change with the seasons, this may even be possible. I hope so. The obvious danger is that Pinchuk might imagine he’s purchased an economics program; and I think the EERC/KSE board is too honest and too much oriented towards economics to tailor teaching and research to fit someone’s private agenda. It’s easy to imagine a future parting of the ways and consequent financial debacle for the program.

All of my Ukrainian friends asked me what I thought of all the changes in Kyiv, but to be honest, I don’t think it has changed so much. The changes I did see were those of economic growth – many more cars, more people, more construction, more stores, and more signage than anyone could possibly read. The food at the Tequila House has gone downhill, but Cossack Mamai is still great. Prices of music CDs have gone up about 4 times since 2001 (I suppose because they appear not to be pirated) but are still cheap. And the Scots are quite right about the beer.

One of the most despicable and corrupt Republicans in the U.S. Congress, Montana Senator Conrad Burns, appears to be headed for a resounding defeat. Burns has trailed his leading opponent by at least seven percentage points all year. Interestingly, his Democratic challenger, John Tester, has openly called for repeal of the misnamed PATRIOT Act, bless him. (Watch the video on the link.) It’s telling that conservative Republicans are having difficulties in Montana…a hardly a leftist state.

UC doesn’t endorse Tester, but since he’ll be one of the new members of what will be, it’s hoped, a Democratic Congress, “we” wish him well. And in particular, to all the new Democrats who’ll be elected, don’t forget what it is that’s bad about the Republicans… they: lust for power, crush individual rights, spend crazily, ignore the Constitution, and violate the law….this is really what is wrecking the Republican Party and turning voters against them, not that they aren’t providing enough transfers to their base. Forget socializing medicine, stealing our guns, and all the other things your leadership will call for. Get the government under some sort of control, and your continued electoral success will be assured.

After all, it’s Burns’ contemptible behavior, his arrogance, his corruption, and even his skill at bringing in pork that has turned Montanans against him. Take a lesson and don’t do the same.

As usual, an ulterior motive for the post…what I am really doing here is endorsing Montana Libertarian candidate Stan “Blue Man” Jones…not that he’s perfect, but anything to spite McCain-Feingold and keep free speech alive and well.

That, plus one more very important thought for the Democrats: when it comes to impeachment, remember…Cheney first!

A real Russian patriot speaks out! 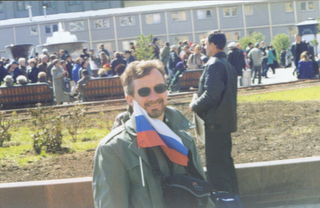 Imagine the following: you unexpectedly become head of a country that used to be the center of an empire. This empire was once considered one of the greatest powers in the world, but it collapsed and broke apart owing to internal contradictions in its economic and political system. The collapse means that the country you've inherited is considered practically a third world country instead of a superpower. What do you do?

This describes, of course, post-Soviet Russia and Putin's position in it. Putin found himself confronted with rampant corruption, declining national security from real internal threats (Chechnya) and potential external threats (the loss of buffer states such as Ukraine, Georgia, and the like), and a poorly functioning economy. These are all terrible problems -- all demanded attention. Unfortunately, Putin has largely gone in the wrong direction.

Putin's first reaction has been to centralize power -- after all, it's a weak central apparatus that permits corruption to thrive and security threats to grow, isn't it? And this is Russia's heritage -- concentrating power in the hands of a central leader was first the Tsarist and then Soviet way. All of Russia's most successful moments featured a powerful central authority. This is something Putin understands well. The problem -- Putin's problem -- is that what he understands isn't the thing that will solve Russia's actual problems:

Corruption -- this is, I think, the greatest single problem facing Russia -- and Putin's response has been to centralize power -- after all, how else to crack down on public and private corruption? But Putin's confusion is that it isn't a powerful state, or leader, that's needed, but a strong state whose power is properly limited. The powerful state has authority in far too many spheres, while the strong state successfully enforces the rules in the spheres where it has influence. Putin's record is one of expanding the power of the state, rather than its (properly limited) strength.

National security -- the Russian and Soviet experience is that the first line of defense must be buffer states. From this standpoint, which Putin understands well, his presidency must look like an utter disaster, given the stationing of American troops in Central Asia, and the moves westward by Ukraine and Georgia. But this is only a disaster if relations with other big powers are seen as a zero sum game, or if "buffer state" means vassal state. There's little reason why Russia inherently is threatened by Ukrainian and Georgian independence, or perhaps even by NATO expansion to those states. But it is fears of Russian domination that pushes these countries towards NATO, and (presumably) also causes the West to have second thoughts about Russia as a "member of the club." Putin's grabbing hand reaction is understandable, given his KGB education...but it's a terrible mistake for Russia.

Economy -- since 1999 the Russian economy has grown at 7% per year -- an excellent macro performance. High energy prices a big part of the story, but Putin is, in part, responsible. The climate for business in Russia is better now than it was when Putin took office. Unfortunately, the base Putin is building for business isn't at all secure -- whenever the state (presumably Putin) decides, property rights are redefined to suit...hence the recent allegations of "environmental problems" in Sakhalin oil concessions, in which Western invesors are finding their contracts are about to be redefined...or the seizing of Yukos and destruction of Khodorkovsky. Relying on high energy and raw materials prices isn't the road to long run growth -- securing property rights so as to generate increased innovation is.

There's lots more to be said, but the bottom line -- Putin's attempts to rebuild Russia smack more of Mercantilism and Tsarism than anything else. This is a disaster for the world, because Russia is an important country, but even more so this is a disaster for Russia. There's no real reason -- other than bad institutions -- that Russia shouldn't be among the most successful countries in the world. So all real Russian patriots (such as the handsome young guy pictured above) realize that Putin's problem -- his failure to be able to see the world outside the lense of his KGB/security training -- makes him Russia's problem.

It's always worth a comment when the great powers demonstrate they can work together on a common project. Too bad it's a terrible project. As the U.S. continues to destabilize the Middle East, Russia now seems intent on doing the same for Eastern Europe.

The tsar of the Russian "Empire" is hoping to crush independence in Georgia, presumably to bring it back to the fold. No doubt there are similar designs on Ukraine and Moldova. The problem for the Russian nationalists and Soviet nostalgists is that there are strong nationalist sentiments and anti-Soviet feelings in these countries. And these include hatred of Russia -- some of it well-deserved -- for what the Russian Soviets did to the people of these countries. Tsar Vladimir's criminal conduct against Georgia, Ukraine, and Moldova will backfire by inflaming anti-Russian hostility in the region, and not just among Georgians, Ukrainians, and Moldovans. Putin's inane and thuggish foreign policy threatens to destabilize Eastern Europe -- to the benefit of no one.

Unfortunately, it's extremely unlikely that the West has sufficient backbone to stand up to the Russian government, and Russians themselves seem to be satisfied with their role as docile subjects of the new tsar.

With all of this destabilization going on, its seems as though world leaders are intent on driving us all to the brink of World War III. When it comes it will be facsinating to see how countries choose sides... even just forecasting how many sides there will be seems nearly impossible.

Just so it's clear, the UC blog will be on the side of...