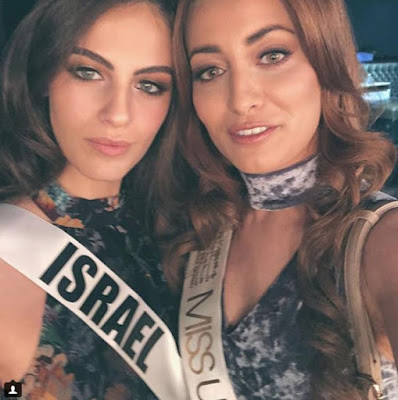 Sarah Idan, Miss Iraq 2017, dared to be photographed with Miss Israel at the Miss Universe pageant.  Worse yet, they were obviously friendly with each other.  For this, she's faced death threats, she and her family driven out of Iraq, and has been stripped of her citizenship.

She also visited Israel, and said she felt better treated there than in Iraq.

Now she has criticized Islamist Rep. Ilhan Omar (D. MN) as "not representing me as a Muslim."  (Omar and Rashida Talib refer an awful lot to "their people," which tends to mean Somalis, Palestinians, and Muslims.)  Omar responded in her usual not-too-bright-but-plenty-spiteful way, sarking that Idan doesn't live in her district.  Ms. Idan's response says a great deal.  From the Jerusalem Post:

"Seriously @IlhanMN this is your intellectual come back?" Idan retorted on Twitter. "I said as a MUSLIM! I don't stand for your anti-American, antisemitic, Muslim Brotherhood agenda, using this democracy to further YOUR & YOUR FRIENDS Islamic socialism goals of dividing & weakening our country."
"When you @IlhanMN come to my State, My City, My zip code right here in CA & accept an award from CAIR, a Muslim brotherhood affiliated organization IT IS my business!" Idan continued. "First was the Middle East, then Europe & now the USA. I fled from the same ideology you’re trying to export here."

That sums Omar up nicely.  Thank you, Ms. Idan, for fighting this evil.  Keep it up!

Photo: Miss Israel Adar Gandelsman and Miss Iraq Sarah Idan take a selfie.  Islamists threaten to kill Idan and her family for this.