Here's an excellent short video on Springfield Armory and their sponsorship of the Hillsdale College Action Shooting teams.  As Adam Smith argued, the ability to protect of an individual citizen to defend himself and his fellow citizens is an important component of liberty.  Hillsdale and Springfield are both doing great work in defending and promoting liberty, as this video demonstrates.

(And note we've managed to promote this without violating our DiLorenzo Redaction Rule!)

Photos from my run on the Bridger Ridge, just north of Bozeman, 20 May.  (Click on photos to enlarge.) 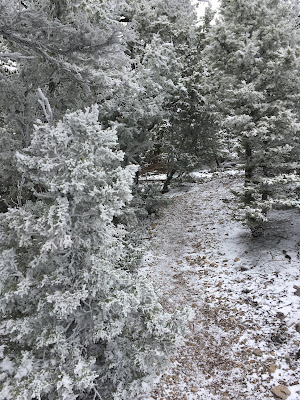 Snow and rime on trail. 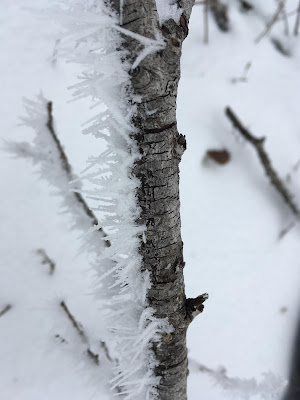 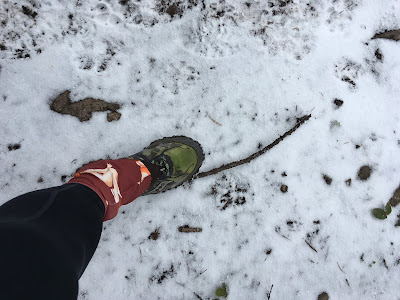 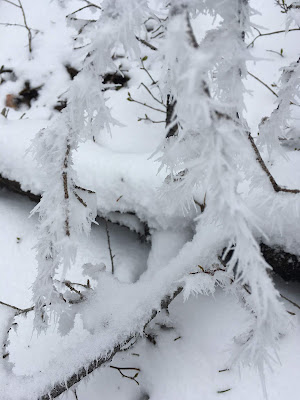 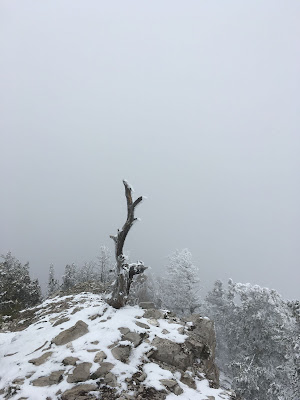 Baldy, the southernmost mountain of the ridge, is in the background, completely obscured by clouds and snow. 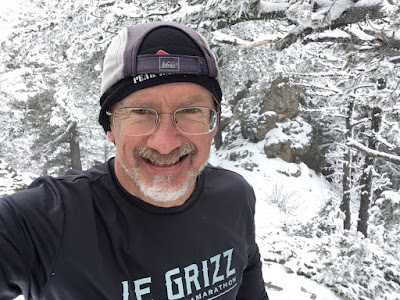 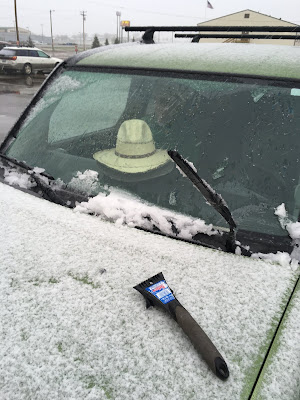 Now settled in Montana.  Drove through 100 miles of snowstorm today.

It's one of our favorites, and there's no better time than now to pick this as our official song.  There are many other fine candidates, but Kate Smith's beautiful and inspiring rendition of Irving Berlin's "God Bless America" sums up our position.  Regardless of where in the world you live, if you believe in freedom, you should celebrate America.

Yes, there are those who oppose freedom, and want to see the United States destroyed (a.k.a. "fundamentally changed"), long to see Israel wiped off the face of Earth, struggle to reverse Western civilization and the Enlightenment, and hate humanity.  But we don't care about them.  This song is an anthem for those who love liberty and love what is good.  Enjoy!

The Democrat Party and Unforeseen Contingencies 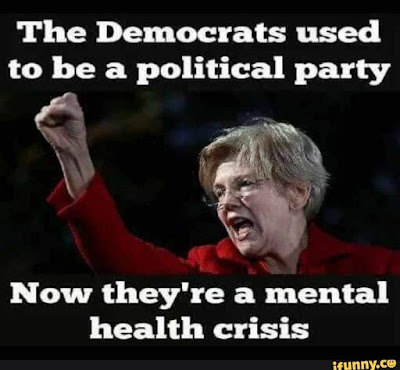 Unforeseen contingencies are states of affairs or events that one never imagined, possibilities or realizations that catch one totally off guard.  There's an element of surprise about them.

A current example is the current state of the Democrat Party and its basket (case) of presidential candidates and other leaders.  I've never been a supporter of the Democrats, but as recently as thirteen years ago I thought them a viable alternative to conservative Republicans.  I certainly didn't foresee the asylum of evil and insanity the Democrat party was becoming.  Consider some of their current positions:

1. Socialism is a viable economic and political system that we should consider adopting.
2. America is a genocidal and colonial country.
3. Israel is a genocidal and colonial country.
4. It's reasonable to give billions of dollars to the Iranian regime even when we know it will be used to finance terrorism around the world.
5. Traditional Christian and Jewish beliefs are bigotry and adherents must be punished by the state.
6. There are more genders and sexes than we can count, and it's bigotry to disagree.  Such bigotry may well be a criminal offense.
7. Privately owned firearms should be confiscated, and military force, up to and including nuclear weapons, should be used against those who disagree.
8. Fossil fuels, automobiles, and airplanes must be abolished as quickly as possible.
9. White people are inherently evil.
10. Terrorists, foreigners,  children, and criminals should vote.  (Now that one makes sense, given the rest.)
11. The fact that a hostile Special Prosecutor could not find anything with which to charge President Trump proves Trump is guilty.
12. Post-birth "abortion" should be legal.

All of this is evil and insane.  It's hard to fathom how crazy the Dems have become.  The party can't bring itself to condemn the hatred of Jews spewed by Ilhan Omar or Rashida Tlaib, or the love of communism professed by Comrades Ocasio Cortez and Sanders.  They are more aligned with Maduro's Marxist-Leninist-Chavista regime than with the U.S. Constitution.  They've adopted every crazy idea of the most radical of the left.  And it's quite a bad thing, for several reasons.

First, there's the obvious matter that these lunatics must never obtain power.  Pol Pot-ism is waiting in the wings.  Utopians cannot tolerate Deplorables.

Second, a one-party system is a bad idea.  The Dems are removing themselves as reasonable challengers to the Republican Party.  Even though I've always disagreed with the Democrats, I supposed they were an important counterweight to the Republicans.  That's no longer true.  The Dems' positions are so dangerous and destructive that I hope to see their party entirely eliminated.  But then what party would check the GOP?  One-party rule is a terrible idea.  But the Dems have become an existential threat to America.

Third, the Republican Party is not good.  The GOP isn't an existential threat to the country, but there's nothing great about it, either.  The Republican establishment is devoid of any real principle, it's hard to imagine them pledging their "Lives, Fortunes, and Sacred Honor" to a declaration of individual liberty.  They seem hapless.  They seem disconcerted that Trump hands them victories they never imagined they'd obtain.  They might well be happier losing.  Maybe they will.

Because of our perpetual optimism, "we" at Unforeseen Contingencies predict doom ahead (in 2020) for the Democrats.  Given what we know, we suspect Trump will win re-election.  The more important point, though, is that the American political spectrum is a mess.  It is made up of utterly incompatible worldviews, some of which (those on the left) are also incompatible with advanced civilization.  Winning elections isn't enough to resolve the conflict of visions.  Something more fundamental must occur.  We hope it will be an intellectual revolution, and not a civil war. 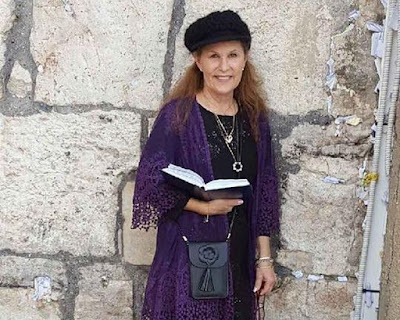 Today, May 2, is Holocaust Remembrance Day.  We at Unforeseen Contingencies haven't formally commemorated it in the past, but we've never forgotten.  But what can we learn from this?

On Saturday, April 27, the last day of Passover, a vile sociopath attacked a synagogue in Poway, near San Diego, attempting to murder the rabbi and as many Jews as he could.  Apparently he expected passivity and an easy target.  He failed.  A member of the congregation, Lori Kaye, made sure that "Never Again" is real.  She interposed herself between the murderer and the rabbi, saving him at the cost of her own life.  Another congregant, Oscar Stewart, chased the criminal from the temple to where he was captured, trying to escape.

These are the best people among us.  Let's learn by their examples.

Just say no, part 1: Evil and Insanity as SOP 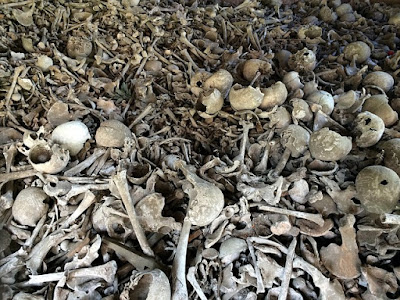 SOP is Standard Operating Procedure. For the American Left, SOP is a bizarre combination of evil and insanity.  And this has taken over the Democrat Party.  As "we" at Unforeseen Contingencies suggested, Mueller's witch hunt found nothing, because the claim that Trump was working with Russia was a hoax,and in fact President Trump and his administration are the most hostile to Russia of any since Reagan (who was, of course, hostile to the Soviet government, rather than the Russian one.)

Democrats are beside themselves that they have no evidence of "collusion" (I'm still unsure what that is, but apparently it doesn't include telling Medvedev to tell Putin we'll be cooperative once the election is over and voters duped, and it doesn't include canceling anti-missile systems in Eastern Europe or refusing to arm Ukraine against Russian invasion, or signing off on sale of uranium deposits to Russia, and most certainly not "Overcharging" them.)  Now they want to impeach Attorney General Barr because Mueller is miffed that Barr's summary of Mueller's report on his inquistion  investigation -- in which Mueller failed to find any wrongdoing at all -- was insufficiently hostile to President Trump.

If the Dems were genuinely interested in enemy infiltration, they'd be investigating Islamist Ilhan Omar, the Somali jihadist who claims America is an evil country, founded on the twin principles of genocide and colonialism.  Or Rashida Tlaib, the despicable representative from Michigan who longs for a "Final Solution" for Israel.  The "cute" photo of her standing next to a map where all of Israel is replaced by Palestine, plus her unrepeatably foul deprecations against our president are sufficient to expose her as evil and insane.  (Hey Omar, want the skinny on someone with dual loyalities and genocidal tendencies?  Investigate Tlaib.)  Or consider comrade Bernie Sanders, who made pilgramage to the USSR, communist Cuba, and communist Nicaragua.  Or comrade Ocasio Cortez, who wants to destroy the free market system and replace it with socialism.

I don't think, BTW, the colonialism is bad... it simply means founding a new community.  But to the left, that's equivalent to genocide, i.e. murdering people en masse on the basis of race.  Genocide is, of course, a terrible evil, so it's bizarre that they claim to oppose it but simultaneously endorse genocide when they condemn whiteness and Jewishness.  But then, they are both evil and insane.

There are many more idiots on the left -- Joe Biden, Peter Buttgag, Pocahontas Warren, Nancy Pelosi,  Kamala "whoreizontal" Harris, and the rest -- and they are obviously both evil and insane.  They oppose liberty.  That's evil.  They claim to hate racism and also condemn white people for being white and Jewish people for being Jewish.  That's insane.  They support socialism.  That's evil and insane.  They claim to believe that sex and gender are totally fluid and amorphous and yet there exist such a thing as males and that they (esp. white ones) are inherent rapists regardless of their actions -- and that anyone who points out these are inconsistent, incoherent lunacies is an oppressor committing violence.  The left is bonkers.

While the left has the MSM and deep state wrapped up, I suspect that they'll lose in 2020 and will slowly lose power.  But their deep infiltration into K-12 education and academia means they aren't going away, and will try to return with a vengeance.  We should not allow this.