We are told by the mainstream media and the Democrat Party that Donald Trump was elected only because Russia "hacked the American presidential election," whatever that might mean.  Many intelligent, well-educated people seem to buy this story, hook, line and sinker.  Rumors and allegations abound (all of it from Trump's political enemies), while actual evidence ranges between slim and none.

It's very suspicious that despite the record levels of leaking, no actual evidence has come to light.  But that's not the only suspicious thing.  Suppose the allegations are true; suppose Trump really is Putin's man.  In that case, whose man is Putin?  Look at what Trump has done since taking office:

1. Trump restarted the Keystone XL and Dakota Access pipelines that Obama blocked.  The worst thing to happen to the Russian economy is the collapse of fossil fuel prices, driven especially by the hydraulic fracturing revolution in the U.S.  Note Hillary Clinton promised to keep the pipeline projects shut down.

3. Trump has promoted export of American liquified natural gas to Central and Eastern Europe, again unlike Obama and Clinton.  As Trump pointed out, this will help the Poles and others escape from Russian energy blackmail.

4. Trump has proposed an expansion of the American military...just what the Russians want, right?

5. Trump has pressured NATO members to increase their defense spending and strengthen NATO forces...just what the Russians want, right?

6. Trump authorized an attack that destroyed one quarter of the Syrian air force, and authorized a change in the rules of engagement that led to shooting down of another Syrian fighter plane...all to the consternation of the Russian military in Syria, which threatened to end deconfliction (apparently a hollow threat).

7. Trump proposes giving or selling weaponry to Ukraine, weaponry that would be suited to battling the Russians who have invaded, something Obama previously ruled out.

That's an interesting list.  Let's suppose, now, that all the aforementioned "intelligent, well-educated" people are right -- Trump has been co-opted by Putin and is following Putin's playbook.  If so, for whom is Putin working?  The eight things I've listed undercut the Russian KGB state.  They are also worse for Russia's siloviki than anything Obama did or Clinton proposed.  If Putin really did maneuver Trump into the presidency and now gives him orders, then obviously Putin is acting to undercut Russia's siloviki regime, and the reasonable conclusion is that Putin is, in fact, an American agent.

I suppose there is an alternative explanation...maybe the "intelligent, well-educated" people are completely wrong.

Eclipse 2017!  And Unforeseen Contingencies was there!  Various friends and colleagues asked me if I had plans to travel to the path of totality.  I'm recovering from surgery and not supposed to travel much, so no, I didn't... but I wouldn't have, regardless.  To me, an eclipse is not such a big deal that I'd spend a few days traveling for it, and besides, we were in the region of 85% occlusion.  I'd rather spend half an hour at home watching 85% than spend an additional three days just to get the remaining 15%.  I understand that for some people it's worth it, it just doesn't get me that excited. I saw another like this once, in Montana, maybe 1979, and it wasn't that memorable.  The Mount St. Helen's eruption was much more dramatic.

Regardless, I was willing to spend a good half hour devoted to such astronomical pursuits, and so assembled a simple Eclipse Viewer from a plan I found online using a cardboard box, tape, aluminum foil, and a few other odds and ends. The whole thing struck me as suspiciously similar to an orgone accumulator, but I'm pleased to report that it worked rather well.  I took some photos (below) with my iPhone, but these don't do it any justice.  To my naked eye, the actual image was quite distinct and much more dramatic than anything in the photos, and the occlusion much greater than apparent here.  We also had passing clouds, and these showed up dramatically whenever they'd blow across the sun.

I'm posting these because the internet seems to be swamped with eclipse photos today, so apparently everyone agrees there can't be too many eclipse photos.  Here's my contribution. 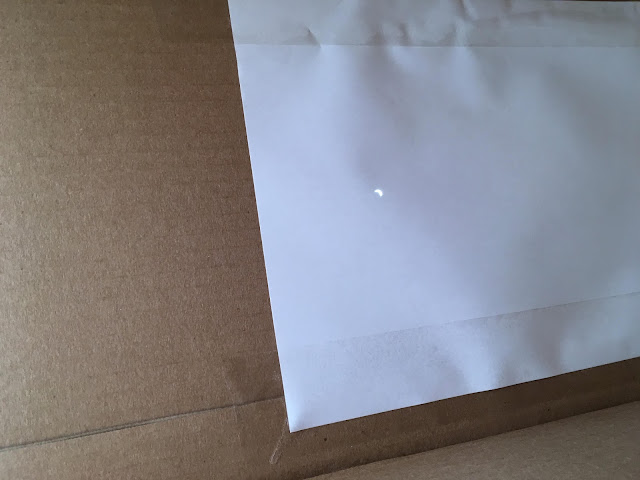 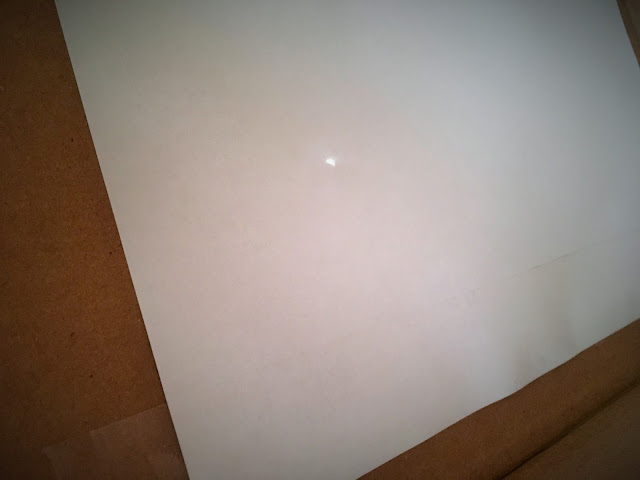 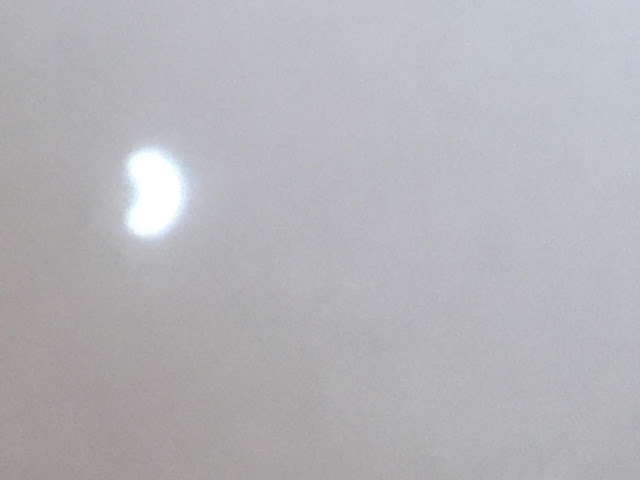 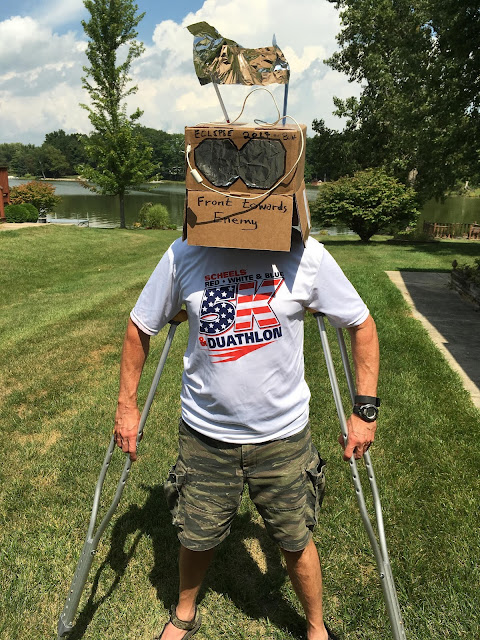 Second generation Eclipse Viewer of my own design.

How to stay sane during a mass panic

I've been arguing for a while that progressives and those further left made an enormous error in adopting the strategy of demonizing rather than engaging opponents.  Labeling opposition as "racist, sexist, homophobic, xenophobic, Islamaphobic -- you name it" might seem like a useful strategy.  After all, as soon as you can get opponents defensively denying it, they lose the debate.  But while there's something to that, this is just part of the effect.  If this is practiced continually, one starts believing one's own propaganda, with the result that one's opponents really do appear as demons, with demonic powers, and also one begins to lose the ability to debate, or even see, the arguments of one's opponents.  In other words, pursuing this strategy will simultaneously make one stupid and drive one mad.  And if many cultivate -- inadvertently -- an inability to think clearly and to retain equanimity, it's almost inevitable they'll be vulnerable to mass hysteria and panic.

That's all prelude to my post.  I received a couple of emails this morning from very good friends of mine, call them X and Y.  They live outside the U.S. much of the year, and are currently outside the country.  They are very sensible people, both highly educated (Ph.D.s), and also well to the left of me politically.   The first email, from X, was links to videos about Charlotte and the rise of neo-Nazism in the U.S., facilitated by Trump.  The second, from Y, follows (I've changed names, of course):

"Got up late this morning (8:30) to find X on couch watching computer video (I thought).  Touched her and she jumped out of her skin.  She had been watching film of the Charlottesville debacle.  She's convinced the SS is on the march.  (I'm convinced they've the IQs of squirrels and have two left feet that would never allow them to march in a convincing manner.)  On the other hand, I saw this sort of stuff during civil rights, and tilt towards the Kinky Friedman approach:  'They don't make Jews, like Jesus anymore, they don't turn the other cheek, the way they done before.. '  While not being Jewish, I still feel the need to pony up.   (I will be consulting you shortly for pointers on the use of AR-14s and such.)"

It strikes me as weird that anyone would seriously think neo-Nazism is on the rise, or that Trump sees neo-Nazis favorably, or that he courts them.  Here's my response (again, edited a bit for UC):

"Good grief. The SS on the march? The main thing that is going on is mass hysteria. Pretty much all 'news' media today is devoted to manufacturing it. 'Fake news' is a pleonasm these days. A gang of neo-Marxists rumbled with a gang of neo-Nazis, neither of whom represent the views of 1% of the country, and now it's 'Springtime for Hitler.' (No, wait, that was Mel Brooks, maybe I'm thinking of Heidi Riefenstahl.) Trump condemns both (correctly) with his usual eloquence (that is, ineloquence, I think you get it but these days it doesn't hurt to be pleonastic) and now he's the reincarnation of Ernst Rom."


"I don't mean to make light of peoples' fears, but it really is just hysteria driven by pushing peoples hot buttons. Here's a sort of combination test and therapy that sometimes works. When someone is in such state, ask them calmly for clear predictions, with time frames, of what they think is going to happen. Sometimes this makes people engage the more rational, less emotional parts of the mind and helps restore equanimity."

Wise, don't you think?  Well, I think so, at least.  So, if you're flipping out over Charlotte, here's Dr. Steele's Patent Panic Remedy™:

Sit down, take a deep breath, and write what you think will happen in 1 year, 2 years, 3 years, 4 years (basically next election). FEMA camps filled with whom? What purges? Specifically, how will Trump or the Republicans or the alt-right freaks change the American institutions? Lay it out clearly, on paper, and explain why.

Specify your fears and they will almost always shrink.  This works for much more than the current panic, of course.

Perhaps you want a second opinion.  OK, here is Dr. Scott Adam's test for How to Know Whether You're in a Mass Hysteria Bubble.  I endorse completely.  You need to read it.

For takes that I find sensible on Charlotte, here are two.  They disagree, but both are rational and worth reading.

Andrew McCarthy's "On Charlottesville, Trump, and Anti-Americanism." From a perceptive former federal prosecutor who is unsympathetic to Trump and doesn't mind removal of Confederate statues.

Now, having studied this, readers of Unforeseen Contingencies will have no excuses for going crazy just because the end of the world is coming.

I don't think so.

The left's "resist" movement is allegedly a response to the outrages allegedly perpetrated by Donald Trump.  I don't believe it.  I think if any other Republican had been the nominee and defeated Clinton, the resistance would be in effect.  As soon as Trump's victory was announced, leading Democrats (e.g. Obama, Clinton) began strategizing on how to depose him, and talk of impeachment began that week.  This should not be surprising because we've seen it before.

The Wisconsin governorship of Scott Walker was the first run of the left's blueprint for subverting a duly elected official not from their side.  It was quite similar -- demonstrations, occupations, strikes and riots for one. Abuse of government police power to threaten and raid political opponents.  Lies spread by a hostile media.  Attempts to use extraordinary political measures -- recall in Walker's case -- to remove an elected official simply because they opposed his non-leftist policies.  If instead of President Trump we had President Cruz, or Walker, or Fiorina, or Paul, or for that matter, even Bush '45, we'd see effectively the same playbook unfolding.

I don't believe there is anything Donald Trump could possibly say or do that would not be met with outrage and condemnation by the left.  He quite correctly identified the violent fascist thugs of "antifa" as a part of the Charlottesville problem.  But had he not done so, he'd have mollified no one on the left.

He's condemned as an authoritarian, even though he far more compliant with the law than Barack Obama was -- note that Obama regularly ignored court rulings against his immigration policies, while Trump complies and appeals or goes back to the drawing board.  Trump is accused of being in league with Putin, even though his policies are the most hostile to Russia of any president since Reagan.  (Yes, I know, Reagan actually had policies for the USSR, not Russia, but any readers will get the point.)

There's nothing Trump can do to placate critics, and he should not try.  Instead, he should simply forge ahead with whatever policies he can.  He's saddled with a hostile Republican party leadership that appears uninterested in real reform, so he should simply accomplish as much as he can.  He'll lose in the mainstream media and the political class no matter what he does, but if he can push through reforms that will help normal Americans, he'll be doing great work and will also have a good chance of defeating the "resistance" of his political enemies -- the left and Republicans.

The posting hiatus ends.  I've been busy with various adventures and activities, including a recent surgery for a bum hip, but it's time to get back in action.  My injury precluded any hard core mountaineering or running, but summer was quite enjoyable anyway.  I'll have a photo report at some point.  No ultrarunning posts for a while, until I am back to running, but they'll be back.  And, of course, our staples of pithy commentary on current events, plus discussions of economics, philosophy, and allthe rest.