...by failing to develop.  Poverty is natural. 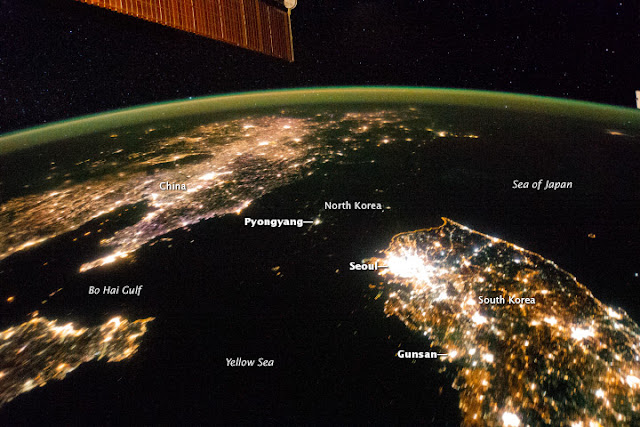 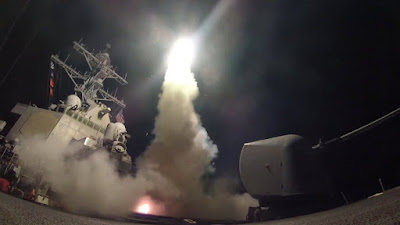 One of my colleagues who is, like me, a libertarian, today asked my view of Trump's decision to strike Syria's Shayrat airbase.  He's quite skeptical of it, while I favor it, and he challenged me on several points.  First, he asked me whether I think it is Constitutional.  Frankly, I do not know, but my best guess is that it isn't (and I said so).  But if so, I also think it sets no new precedent and is far less serious than violations committed by Obama and Bush 43.

My argument in favor is consequentialist.  I think that, on net, the strike makes the world a safer place, for the following reasons.

1. The attack was on the military hardware used by Assad to launch chemical weapons attacks.  For Assad, the cost of using chemical weapons just increased enormously, and his capacity to use them has been reduced.  Human casualties seem minimal.

2.  Under Obama, America was a paper tiger, and the Russians, Iranians, North Koreans, and Chinese acted accordingly.  I suspect they'll now be more cautious...at least the Russians and Chinese.  There may be some staring down, but America has a winning hand in that game, so long as Trump is willing to play it.

3. The BS about Trump being a Russian patsy is now obviously BS to any sane person.

4.  The dishonesty and incompetence of Obama, Clinton, Kerry, Rice, and the rest of those fools is exposed.

5.  America's reputation in the Arab and Muslim world has been boosted.

My friend's primary argument is that interventions unleash unintended and unanticipated consequences, and that there's danger in this.  That's no doubt true, but it's also the case that there's danger in doing nothing.  I think a world in which Assad can use sarin against civilians with impunity is a world in which Ali Khamenei and the Majlis, Kim Jong-un, and Vladimir Putin believe they can also do as they wish with impunity.  I also note that the Tomahawking was measured and appropriate.  It was directed against (and apparently largely disabled) the base from which the sarin attack was launched.  I can't think of any reason not to like that the Syrian Air Force lost 15 aircraft, as one report suggested.  At the same time, it's not an invasion, a commitment to further war or regime change, or anything else.  It's simply depriving a criminal of his weapons.  It's hard to imagine a more appropriately measured, limited response.  (Thanks, Mad Dog!)

The Russians are now in a huff, but so what.  I think there's very little they can do, and it's unclear why they'd gain from doing anything other than posturing.  But if they go farther and provoke a fight with the United States (something I gather my friend fears), well, they were eventually going to do it anyway then.  There's nothing in the Shayrat strike that would change Russia's calculus.

I don't know that I convinced my friend, but at least I've convinced myself.  This is how it all looks to me.

Interestingly enough, only a few hours before the missile strikes, Hillary Clinton said the U.S. ought to engage in airstrikes against Assad.  And as numerous observers have pointed out, Donald Trump has just enforced Barack Obama's red line.  Trump defending Obama's legacy, now that's an unforeseen contingency!

Photo: a Tomahawk lifts off from U.S.S. Ross. Go get 'em!

1.  It's just been announced that the United States Navy has fired 50 or so cruise missiles at Syrian Air Force bases.  Good!  Obama's "red line" was a lie, and his idle posturing encouraged continued bloodshed in Syria, emboldened that Russians to intervene on Assad's behalf, and enabled Assad's recent use of sarin.  No more idle posturing, and let tyrants around the world take note.

2.  The Senate Republicans have ended the filibuster rule that required 60 votes for cloture; Gorsuch will be approved and join SCOTUS.  The Democrats brought this upon themelves; I hope Gorsuch is joined by more Constitutionalists before long, and I hope the Democrat Party never recovers.

3.  It's clear that Barack Obama and his administration used the national security apparatus to engage in political espionage against the Trump campaign, and very possibly against others.  I hope very much that before this is done, Susan Rice, Evelyn Farkas, John Podesta, Hillary Clinton, and Obama himself are behind bars where they belong.  Put Lois Lerner in with them.

Re the the allegations that Trump is somehow in Putin's control, it's hard to understand how this could be.  For all his comments and semi-defenses of Putin as a strong leader (comments which I find outrageous), Trump's policies have been much less Putin-friendly than Obama's.  Advancing the Keystone XL and Dakota Access pipelines, proposing a buildup of the U.S. military and increased NATO strength, adding Macedonia to NATO, and now attacking Assad... One would suppose that people would finally catch on that Trump's blathering is no more meaningful than Obama's; it's action that matters, and so far, Putin shouldn't see much to like in Trump.

What to do about health care reform?

Here are three excellent short articles on how to fix the health insurance mess.  In the wake of Ryancare ("wake" --  yes, that's a double entendre) there's been some very good analysis.  These are my three favorite pieces.

Economist Veronique de Rugy of the Mercatus Center points out how badly flawed the AHCA was, and also how foolish it would be to give up now on health care reform (as some have suggested) after only a couple weeks of frenzied and thoughtless effort.  As she points out, the AHCA did not constitute a serious reform.  It certainly didn't repeal ACA, and it did nothing to stop the rapid increases in insurance premiums.  As she correctly points out, [AHCA] "failed because it was a bad bill. It wouldn't have reformed many of the Affordable Care Act's regulations, and it would have done little to control rising health care insurance premiums. It also doubled down on the misguided idea that the government and insurers, rather than consumers, should pay for a large number of Americans' non-catastrophic health care needs. This, among other things, contributes to the rise of health care costs. Adding insult to injury, it was a political bill that failed the long-term stated policy goal of repealing Obamacare."  Real reform will repeal ACA, open a free market in health care, and shrik Medicare and Medicaid.

Law professor Charles Silver of University of Texas-Austin points out, correctly, that health insurance is the fundamental driver of spiraling medical costs, and that nothing short of eliminating most insurance will solve the problems and make health care increasingly accessible.  As he writes,
"In healthcare, the collective action dilemma stems from the fact that comprehensive coverage—by which I mean all forms of third-party payment, including Medicare and Medicaid, as well as private insurance—is the main driver of the healthcare cost spiral that gone unchecked since the mid-1900s.

The problem is a vicious circle.

In short, third-party payment got the healthcare cost spiral going and has fed off it ever since."

The solution is made more complicated by the perfidy of politicians of both parties; "In the short run, the education program is the most urgently needed.  Republicans will have to teach fearful Americans that healthcare is expensive because it is insured.  This will be hard to do.  Democrats, most of whom want universal insurance coverage for everything and all of whom want to kick the Republicans out of office, will do what they can to stoke voters’ fears.  Health care businesses will too.  They know that private insurance, Medicare, and Medicaid are their cash-cows, so they will say and do what they must to protect them.

Worst of all, Republicans have undermined their ability to teach anyone anything by cultivating a reputation for being stupid, dishonest, and corrupt."

So what to do?  In my favorite piece of the three, aerospace engineer, futurist, and author Robert Zubrin considers simply outlawing health insurance (this would work!), but -- recognizing the risk of catastrophic costs from low-probability events -- suggests getting rid of most insurance, mandating and enforcing price transparency in health care, and... providing a universal catastrophic policy.  "[R]epeal Obamacare, with all of its mandates, as well as all prior incentives for employer-provided health-insurance plans. It would provide raises for federal employees, replacing their health-insurance policies with cash and encouraging state, local, and private employers to do the same. It would create a regime of enforced transparency, including published prices and hospital-cost ratings calculated by government statisticians, so that the public knew where health-care bargains were to be found. It would include regulations forbidding the uninsured from being charged more than the insured, and laws sharply limiting the maximum punitive damages obtainable from medical-malpractice lawsuits...And it would create a universal system of catastrophic health insurance, administered either through the federal government, the states, or employers."

He also notes, "The last item on the bill’s list could stick in the craw of conservatives, because a universal system of catastrophic health insurance might have to be single-payer to pass Congress with bipartisan support. But they should reflect: Such insurance would be very cheap, both because catastrophic insurance is in general cheap and because the free-market principles enshrined in the rest of the bill would drive down health-care costs across the board."

He's right.  I have often thought this.  In crop insurance, the USDA offers a CAT policy (catastrophic risk protection) that -- for a nominal fee -- protects the insured from a total financial disaster in the case of a 50% or worse crop failure.  It's cheap insurance for unusual events; it does not generate market distortions and it's not a source of taxpayer loss.  A similar health insurance would deflate almost all of the opposition to a free market in health care...or at least the opposition that's honest and well-meaning.

As Zubrin puts it, "[t]he last item on the bill’s list could stick in the craw of conservatives, because a universal system of catastrophic health insurance might have to be single-payer to pass Congress with bipartisan support. But they should reflect: Such insurance would be very cheap, both because catastrophic insurance is in general cheap and because the free-market principles enshrined in the rest of the bill would drive down health-care costs across the board. Besides which, unless there is serious reform along the lines described above, the ultimate result of Obamacare’s ongoing failure will be an enormously costly single-payer health-care system of the European variety. A system combining free-market principles that dramatically reduce costs with single-payer catastrophic insurance and a safety net for those who need it would certainly be a much better outcome."

All three of these articles should be read in their entirety.  They are not too long, and they say much.  Veronique de Rugy, Charles Silver, and Robert Zubrin should be on the team that designs the real Obamacare repeal!