Trump in his own words

Trump's Plans: a proposal for destruction

The progressive, Kasich, seems senile to me.  Ben Carson remains a good and thoughtful man who cannot debate.  Cruz (my admitted favorite) and Rubio both speak well and make sense.  Trump -- belligerent fascist.  I hope everyone pounds him and humiliates him.  He strikes me as a bully who must never be trusted with power.  But Trump's proposed policies are also contradictory and impossible.  Here's an example of why.

Trump proposes massive tariffs.  Trump insists we have a positive trade balance, which he sees as America's loss.  Never mind that this view of a trade balance is a basic and long-discredited fallacy, it is also completely incompatible with other portions of his proposed policies.

Trump's proposed tax cuts reduce federal revenues.  Trump also refuses to cut entitlements and refuses serious budget cuts; his fiscal plan would increase deficits.  There's no question about this.  So... who is going to finance these deficits?

Currently the government budget deficit is financed by the net inflow of foreign capital, that is, by foreign purchases of U.S. government debt instruments.  In the international balance of trade, the trade deficit is balanced by the inflow of foreign capital, which is being used to finance the federal budget deficit.  If the U.S. runs a trade surplus, then there's a capital outflow.  That's basic accounting. So...

Which is it, Donald?  If we run a trade surplus, we have a capital outflow, so who will finance the budget deficit?  Answer: Americans, which will result in higher interest rates, crowding out of private investment, and growing interest payments.  This is a program for economic catastrophe -- low growth on a long run basis and a sovereign debt crisis.

There's another issue here.  Trump's proposal for tariffs violates WTO.  The obvious result would be retaliatory tariffs and a general trade war of the world against the U.S.  This would further damage the U.S. economy and further shut off America's access to foreign capital.

Donald Trump's know-nothing nationalism would be an economic disaster for the U.S. and for the world.

A Nobel Prize for Sanders... 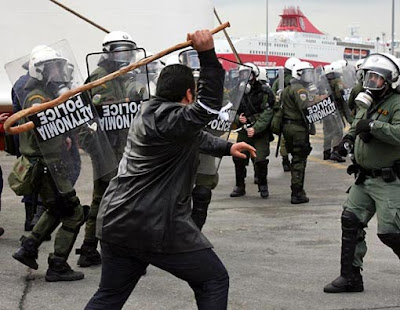 A gaggle of high-powered, left-leaning economists, including Christina Romer, Alan Krueger, Paul Krugman, and others (and they really are big name economists) have cast, umm, a "bit" of doubt on the Sanders economic plan.  Sanders claims it would essentially eliminate unemployment and poverty, raise median household income 38%, balance the budget and earn surpluses for the government, and bring about a new trial for Sacco and Vanzetti.  Well, I'm not certain that Sanders actually made this last claim, but the aforementioned economists argue that it is no less likely than the other claims.

They are, of course, correct.  Sanders' economic claims are flights of fancy, as ill-founded as Charles Fourier's claims that the oceans would turn to lemonade if socialist policies were adopted.  Economic growth rate of 5.3%, unemployment falling to a record low of 3.8% even while labor force participation rate increasing from current 62% to 67% (i.e. enormous number of people entering the job market and having no trouble finding work), the 1.3 trillion USD deficit turning into "large surpluses..."  What is interesting is that Sanders actually found economists who were willing to affirm that these miracles would indeed happen, although it turns out they are from U. Mass. Amherst, so the term "economist" must be used rather loosely.  (This isn't really a smart aleck comment, BTW; heterodox economics is so different that it really should be thought of as a different academic endeavor.)

Even more amusing is that Sanders' wild claims left our gaggle of high-powered economists with egg on their faces, as they'd all just been raking Republican candidates over the coals for making far less extravagant claims, such as Jeb!'s claim that under his presidency economic growth would be 4%, which they all found outlandish.  PK puts it particularly nicely: "Sanders needs to disassociate himself from this kind of fantasy economics right now."  If a Republican had made such wild claims, Paul would not be calling for him/her to retract, he'd be spraying a firehose of invective, scorn, and general nastiness at the target.  Come on, Paul, you used to be an economist.  Call Sanders an ignoramous, the way you did in the old days when you were a real hero.

But on to the main point.  Why a Nobel Prize in Economics?  The Sanders campaign did not take this criticism from a number of noted economists passively, but rose to the challenge, diving straight into the heavy theoretical and empirical work, and came up with this crushing refutation.  In the words of Sanders' chief policy advisor, the criticisms are baseless, because the critics are "the establishment of the establishment."  Now there's an airtight proof for you!  With brilliance like this, the Sanders' campaign should be a shoe-in for the prize, don't you think?

Photo: Greeks are finding their experiment with democratic socialism to be quite exciting.

If Trump threatens critics with lawsuits as private citizen...

what would he do as president? 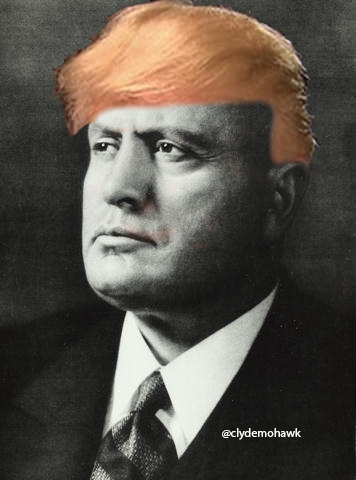 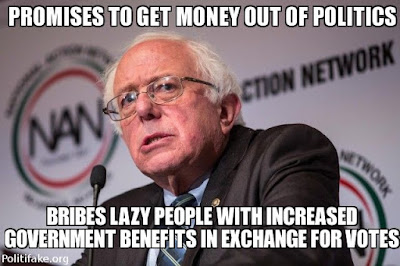 This might become a semi-regular feature (hence the enumeration).

"We" at Unforeseen Contingencies find ourselves enjoying the primaries for a change.  For one thing, there are multiple candidates we actually like, and at least one of them is doing well.  For another, what entertainment!  What a show!  Consider New Hampshire.  For example, there was Jeb! Bush gloating  about having beaten the two freshman senators... shortly before the updated vote count revealed that Ted Cruz surpassed him pushing Bush into fourth.  The Bush campaign spent over $36 million to achieve this remarkable finish ($1,150 per vote compared to Cruz' spending of $18 per vote.)  That's quite a message you've got there, Jeb!

There was also the bizarre spectacle of Marco Rubio repeating the same strange line about Barack Obama during the debate.  The first time was simple obfuscation and use of a standard politician's technique -- don't answer questions you don't like, just say what you want -- in this case, delivering a canned campaign speech line.  The second time, after Christie called him on it, was funny. The third time I found it creepy.  The Rubio-unit really did suddenly sound like a computer programmed with standardized responses and unable even to recognize that the script had gone awry.

But these Republican hijinx are nothing compared to the shenanigans of the Democrats.  Bernie Sanders effectively tied Hillary Clinton in Iowa (he very well may have beaten her, but the non-transparent rules of the Democrats' caucuses make it impossible to check anything) and he clobbered her in New Hampshire.  So here are the current standings in delegates: Sanders 42, Clinton 394.  Yes, Bernie Sanders has either won or tied the primaries so far, and he has won 9.6% of the delegates so far. Hillary even won more delegates in New Hampshire than Bernie.  You have to love the way the Democrats do democracy!  Feel the Hill, Bern!  Hahahahaha!

But enough of these amusements, on to our first candidate for Bernie Sanders' most foolish idea: Sanders tells us that his version of socialism would be nothing like Soviet socialism.  You see, it's democratic!  The people get to vote on it.  The people decide.

Is this a joke?  We the people already get to vote on our government, and if there is anything that practically everyone across the political spectrum agrees on, it's that we have essentially no control at all over what the federal government does.  One would have to be entirely ignorant of the last 20 or 30 years of American politics not to understand this.  THAT'S why non-establishment candidates in both parties are battering the establishment candidates so badly.  Being able to vote on something gives you no control at all.  Sanders really strikes me as an idiot, and people who buy his argument simply are not thinking.

All of this doubles my amusement that the Democrat Party rules are rigging the game against Sanders.  His idealistic and  rather gullible followers (I think many really are idealistic, and not simply opportunists hoping to get free stuff under a Sanders regime) will be in for a rude shock if this continues.  And if the candidate on whose behalf the game is being rigged ends up being indicted, well...  For all the fractures in the Republican Party, I think the Democrats are in for a far worse internecine bloodletting.

Quick thoughts on the Iowa Caucus

1. Ted Cruz won. He wasn't "supposed to;" polls had him below Donald Trump by five percentage points or more. He won by almost this many points.

2. He won while vowing to eliminate ethanol subsidies. This should be the most important story of the caucuses, but it is largely ignored. The Republican governor of Iowa specifically condemned Cruz and called for his defeat. Cruz won.

3. Jeb Bush outspent everyone else. He spent more than Cruz and Trump combined, yet scored worse (2.8% of votes) than Ben Carson (9.3%) and Rand Paul (4.5%).  So much for money determining everything.

4. Trump failed miserably.  If either Cruz or Rubio weren't in the race, I suspect most of their voters would not go to Trump.  That's likely true of Carson and certainly Paul supporters.  I don't believe any or them systematically "steal" votes from Trump, but I think they steal votes from each other.  If the pack thins out, a non-Trump bloc will grow.

5.  Hillary Clinton barely won.  This is a catastrophe for Clinton, since she had a 30% lead in the polls at one point.  This isn't her collapse, but she's in a mess.  She'll get a drubbing in New Hampshire.

6. Of course, the Iowa Democrats' caucus methods are obscure and non-transparent, so Bernard Sanders is expressing a bit of skepticism over the results.

7. I can hardly wait for Bush to leave the race.  I hope he takes Kasich and Christie with him.

8. Sanders supporters are in a tizzy because some ties were broken with a coin toss, and Clinton allegedly won 6 of 6.  But even "worse," one of Bernie Sanders' precinct captains was an illegal alien, and he and his illegal alien roommate could have broken the tie had they been allowed to caucus.  Unfair, he says.  On the other hand, "we" at Unforeseen Contingencies think this bastard should be arrested, jailed, and then unceremoniously deported.  Hector, go home, you socialist idiot.