The inevitability of nuclear war, part 1 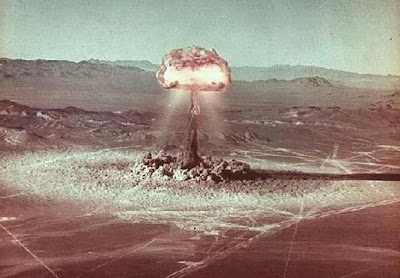 Nuclear war is inevitable, and we will see it occur in the next ten years.

Inevitable? How can that be?  Nuclear war can only occur if someone with the ability to engage in it decides to do so, and no one has.

That's a good point, and I agree -- in fact nuclear war is not genuinely a certainty, no one with nuclear weapons has decided to use them, and hence it's not something to which I assign probability of one.  It is not inevitable. OTOH, I do assign conditional probability of one to it: given the current direction of the world, nuclear war is inevitable.  Unforeseen contingencies, things we cannot quantify in our probability calculus because we have no idea what they are, could always change this, and I am hoping they will. But let's consider current trends.  Here's one.

In Ukraine, Vladimir Putin pursues open warfare.  It's clear to any observer who is not intentionally ignorant that Russian regular forces have invaded, as "we" predicted in April.  As evidence, consider captured Russian soldiers, dead Russian soldiers, T-72BM tanks, AK-100s, Buk anti-aircraft missile batteries... yes, I know, as Russian Foreign Minister Sergei Lavrov assures us these are all simply items purchased from army surplus stores by pro-Russian Ukrainians, to defend themselves from a CIA-NeoNazi coup in Kyiv... but "we" at Unforeseen Contingencies assure you, dear reader, that this is a lie.  For one thing, if such stores existed, you can count on it that "we" would have been stocking up ourselves.

No, it's all a lie -- the Russian army invaded Ukraine some time ago, and the invasion is now overt, even though the Kremlin continues to deny any involvement.  Putin needs to crush Ukraine's move towards western civilization -- he and his regime cannot survive if it turns out that Eastern Slavic countries are capable of flourishing as free, liberal, democratic societies.  Putin and his cronies comprise the worst in the KGB and Russian organized crime.  Putin is a thief who has stolen billions of dollars, a serial killer who has had many people killed. (See, for example, Masha Gessen's biography of Putin.)  If he and his siloviki ever face justice according to western values, it is their end.  Hence, they correctly understand themselves to be in a life-or-death struggle against the West.  Given this, they cannot be too ruthless in making certain that individual rights and the rule of law never take hold in Russia.  Hence, they must never take hold in any stepping stone, such as Ukraine or Georgia. This is, for Putin and co., a moral imperative.

On the other hand, genuine moral imperatives apparently do not exist for most western leaders.  Germany's hapless boob, Angela Merkel, repeatedly lectures Vladimir Vladimirovich, but to no avail.  She makes increasingly tough demands to him -- all of which are every bit as influential as my demand that Congress balance the budget (without raising taxes!) and Barack Obama and Joe Biden both resign.  (While we are it, Angela and I ought to get together and demand a new trial for Sacco and Vanzetti as well.)

Even worse, Barack Hussein appears to be so captivated by golf that he has no time for anything else. Perhaps that's a blessing in disguise, since the more golf he plays the less time he has to inflict damage on America.  Regardless, Obama has no more idea how to respond to Russian aggression than he does with respect to ISIS aggression.  After all, his go-to strategy, blaming Republicans and condemning the Tea Party and Israel, doesn't make much sense here.

OK, fine, but all my smart-alecky commentary aside, what's this about nuclear war?  Well, here's why it is inevitable, ceteris paribus.  Putin has already started looking beyond Ukraine to Estonia and Kazakhstan.  He has threatened Ukraine with nuclear attack, and Russian intelligentsia are calling for genocide against "inferior races" such as Poles and Ukrainians.  Nuclear war is thinkable for him.    Worse, it migt be a good strategy.  Andrei Piontkivsky maintains that Putin contemplates, and could win, a limited nuclear war.  Piontkivsky and others suggest that Russia might hit Estonia's capital,Tallinn, with a tactical nuclear weapon, confident that the West would fail to respond.  America is NATO, after all, and what percentage of Americans would even be able to recognize Tallinn as the name of a city, much less explain why we should risk anything at all over its destruction?  Nuking a NATO member with impunity would end NATO, humiliate the United States, and bring the old Soviet Empire back into Russia's fold.

Preposterous?  Well, yes it is. Tallinn is upwind of Kaliningrad.

Back in 2009 Russia prepared for this contingency, running a wargame that included a simulated nuclear attack on the Polish capital.  They did it again in 2013.  Poland is a new NATO member, one that is a thorn in his side, and one the West would be unlikely to defend.  So given everything that is occurring, why wouldn't we expect a limited nuclear war?  Putin has practiced it and hence contemplated it. Putin must be entirely ruthless to survive, so a nuclear strike is not unthinkable.  And a limited nuclear strike will be darned useful, if he's pressured enough.  Well, can the West not pressure him?  I suppose so, but at this point, Putin will only take that as capitulation to his aggression (which perhaps he does not see as aggression, but that's irrelevant) which will induce him to be even more aggressive.  It's a simple matter of incentives.  And at some point, it will all go too far.  There's no natural stopping point for aggression.  So given the way things are going, either the West surrenders or a Russian nuclear attack is inevitable..or... the only real way to stop Putin is to hit Russia hard now -- I think, at this point, that the extreme sanctions I proposed earlier will still work.  Freeze all Russian financial assets in the West. Cancel all Russian visas to the West, except for those of anti-Putin dissidents.  Close all western ports to all Russian shipping and goods.  The Russian economy depends on trade with the civilized world.  Cut it off entirely, until Russia becomes civilized, with civilized leaders.

I see little probability that any leader in the West will have a resolute response to Putin.  Western leaders are mired in the the moral uncertainty of multiculturalism.  They cannot be resolute, because they are all so devoid of principle and full of self-doubt... and as Putin apparently thinks, they are also focused entirely on short run material gain.  There is no leader in the West today who would demand that Khruschev remove his missiles, or demand that Gorbachev tear down his wall.  And in a world of moral cowards, evil will expand. Given that, nuclear war is inevitable.