I do not have time for a serious post yet, but I wish everyone who loves liberty a Happy Ukrainian Independence Day!  May the Ukrainians crush the Russian threat and be free and independent.  May the Russian people learn that it's possible to live as a free person, that tsars, commissars, and the like are impediments to life, not necessities.  May we all learn this, and live by the Ukrainian peoples' example.

Quick note to our friends in ISIS, Hamas, and their supporters 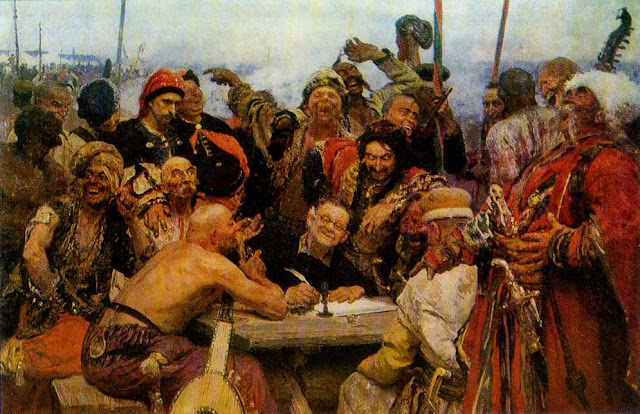 "O Muslim devil and damned devil's kith and kin, secretary to Lucifer himself. What the devil kind of knight are you, that can't slay a hedgehog with your naked arse? The devil shits, and your army eats. You will not, you son of a bitch, make subjects of Christian sons; we've no fear of your army, by land and by sea we will battle with thee, fuck your mother.

"You Babylonian scullion, Macedonian wheelwright, brewer of Jerusalem, goat-fucker of Alexandria, swineherd of Greater and Lesser Egypt, pig of Armenia, Podolian thief, catamite of Tartary, hangman of Kamyanets, and fool of all the world and underworld, an idiot before God, grandson of the Serpent, and the crick in our dick. Pig's snout, mare's arse, slaughterhouse cur, unchristened brow, screw your own mother!

"So the Zaporozhians declare, you lowlife. You won't even be herding pigs for the Christians. Now we'll conclude, for we don't know the date and don't own a calendar; the moon's in the sky, the year with the Lord, the day's the same over here as it is over there; for this kiss our arse!"

This is one of my favorite political statements, after the Declaration of Independence and the Oath of the Montana Vigilantes.  Sound principles, courage, and eloquence, all in one neat statement.  (This one is also a bit crude, I admit.)  Thie text is the response of Ukraine's Zaporizhian Cossacks to the Sultan of Turkey when he demanded they put down their arms and swear allegiance to him.  The accompanying picture is one version of Ilya Repin's depiction of the writing of the letter.

There should be no doubt that at some point those who defend civilization will have to take the same stance and kill ISIS.  They will have to kill Hamas.  They -- OK, we -- cannot coexist with savages who believe they have a holy duty to destroy liberty and modernity and impose their savage values on us. ISIS beheads Christian children and displays their heads in public as decorations.  Hamas tunnels under kindergartens and prepares to murder thousands of children. These are homicidal maniacs riven by crazy theology.  Currently the leadership of the civilized world is paralyzed by leftwing political correctness and sees political Islam as a perfectly reasonable reaction to Western civilization.  But the left's ideology is idiotic and unsustainable; it won't last.  And neither with political Islam.  In the end, ISIS and Hamas will be destroyed, because no one  with even a vestige of sanity wants to live under the systems they'd impose.

So"kiss our arse" and "screw your own mother," stupid Islamist mohammedans and friends.  The future belongs to the rational.