The news is dark.

As Russia's war for territorial expansion continues, economist Anders Åslund explains why Putin must win at all costs, and what can be done about it.  I agree.  Incidentally,  Åslund was on the board of directors of EERC-Kyiv when I taught there and I met with him on occasion.  I think a great deal of him.

Those "green men?"  Economist Paul Gregory provides solid evidence that they are indeed Russian troops who have invaded Ukraine.

These are dark times.  May Putin's schemes come to ruin, and may Ukraine escape bondage to his criminal regime.  Unfortunately, Putin's targets include more than just Ukraine.

From the Baltic Times,

Estonia's Interior Minister tries to reassure people that "it can't happen here," but...

Some of Putin's shills are already calling for parts of Estonia become Russia.

Here's a thoughtful piece discussing the implications.  If the West does not treat the Budapest Treaty (under which Ukraine surrendered its nuclear weapons in return for security guarantees) as binding, will the NATO agreement be any more solid?  What conclusions will China, Japan, Israel, and others draw if the West allows Putin to invade Ukraine? 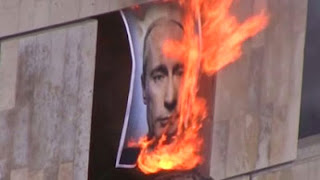 Alexander Motyl has an interesting analysis of likely troop requirements should Russia try to occupy some or all of Ukraine.  It is not promising for Russia.  If Putin cares about this, maybe I'm wrong in my predictions.  I still don't think so.

Anders Fogh Rasmussen, Secretary General of NATO, has a fairly perceptive analysis of Russia's behavior.  It's a pity he has to conclude with a call for the primary culprit to voluntarily de-escalate.  But so far, the West appears to be interested only in marginal responses, so Rasmussen can do little else.  NATO also has a useful fact sheet dispelling the lies Putin and Lavrov tell about NATO and Ukraine.

One of my current students has just sent me this excellent State Department fact sheet that refutes ten Russian myths about the current situation in Ukraine.  Of course, it's worth reiterating that these aren't honest misunderstandings but intentional disinformation concocted in the Kremlin.  (Thanks, Ashley!)

Yuriy Gorodnichenko, economist at UC Berkeley (and one of my former students in Kyiv) compares George Kennan's analysis of the USSR with Russian behavior under Putin.  It's not very reassuring.

Also from VoxUkraine, Kateryna Dronova of UC Berkeley gives an excellent analysis of language in Ukraine and explodes the lie that the Russian language is under any sort of assault (one Putin's most absurd claims).

And a Belarussian opponent of Lukashenka says Putin is contemplating attacking Ukraine from Belarus as well, with Lukashenka's help.  If so, may Putin's forces get stuck -- permanently -- in the Chornobyl Exclusion Zone.

Photo: from Pussy Riot's protest of a couple of years ago.  Incidentally, a number of You Tube videos critical of Russia and Putinism seem to suddenly be unavailable.

Hot War Begins in Ukraine, and My Predictions

Now Russia's war on Ukraine has gone hot.  Russian special forces are attacking government offices in Donetsk and elsewhere in eastern Ukraine.  This is not a surprise at all, there has been a growing number of operations using Russian and Ukrainian agents to lay the groundwork.  Now Putin has committed his special forces in numbers, and it's a certainty that this will be followed by a land invasion.  As in Crimea, the spetsnaz are in uniforms without insignia so that Putin and Lavrov can claim they are just local people defending themselves against fascists who are attacking Russian speakers.

Western leaders seem to be in denial.  Here's a Bloomberg piece describing the combat and related matters, note the U.K. Foreign Office statement:

“Assumptions that Russia is complicit are inevitable as long as Moscow does not publicly distance itself from these latest lawless actions,”

It's an assumption that Russia is complicit?  As if AK-74's, body armor, matching uniforms, communications equipment, grenades, etc. are things one can legally purchase in Ukrainian sporting goods stores, as Putin and Lavrov have claimed.  As if coordinated military attacks are a manifestation of civilian political opposition, just demonstrations that get a bit out of hand.  No, these are the same Russian spetsnaz forces that invaded Crimea. Everyone knows it, or is an idiot.

Meanwhile, pro-Putin demonstrators have attacked pro-Ukraine demonstrators in Kharkiv.  Putin needs violence, now, to "justify" his land invasion.  Some Ukrainian observers argue that Putin is trying to trigger a civil war and chaos.  Perhaps, but I think this is wrong.  The longer his troops sit on the border, the more their readiness degrades and the more time for the West to figure out a response.  And should Kyiv have a successful presidential election, he's really in a mess.

Meanwhile, Russian media has mounted a full Soviet-style disinformation campaign to convince the citizens of Russia that the West and Ukrainian-speaking fascists have already mounted a genocidal war on ethnic Russians and Russian-speakers.

So here's what will happen: shortly, Putin will announce that Kyiv's "fascists" are slaughtering Russian-speakers in eastern Ukraine.  He has no choice but to intervene to stop this horrible violation of "human rights."  The Russian Army will mount a land invasion of Ukraine from the east (in the vicinity of Luhansk and Donetsk), north (to Kharkiv), and south (from Crimea).  I'm 100% sure this will happen.    In addition, I think it very likely that these forces will continue moving south and west, all the way to Moldova, where they'll link with Russian forces in Transdnistria. Its also likely that Russian forces will enter near Chernihiv and drive to Kyiv, where they'll meet forces from the east.  I think the chances of an invasion continuing in this fashion beyond eastern Ukraine are greater than 50%.  Maybe Crimean forces will mount a landing on Ukraine's southern coast as well.  (I'm unsure of their competence at this, but some weeks ago the Ukrainian Navy drove off an incursion into these waters by two Russian troop ships -- a test run?)  After that, all that's left of Ukraine will be west of a line drawn from Kyiv to the northern tip of Transdnistr.  The rest will become "the ukraine," just another bit of the Russian Empire.  This assumes, of course, that he's successful.

I don't think the Ukrainian military can mount a successful defense.  I do think the Russians will be entering a hostile country, were people loathe and fear Moscow and are willing to resist.

That's the analysis of Unforeseen Contingencies, in particular of me, chief blogger Charles N. Steele.  I didn't get this from someone else; I just don't see how other conclusions can be drawn from the evidence.  Perhaps I'm entirely wrong, but I'm sufficiently convinced of all this that I'm willing to state it publicly.  My strongest wish is that I will have to publicly admit how wrong I was.  I'm not alone, though, for example, economist Paul Gregory has a similar analysis.

And my prediction only goes so far.  I have no idea how all this will play out.  I can't guess what the West will do.  I tend to think "nothing serious" but could be wrong.  I can't predict how a Russian invasion will go; invading Crimea was one thing, but invading territory inhabited by a hostile and fearful population is another.  (That's why I don't think Putin will invade places like Lviv.  Any Russian soldier the citizens managed to get hold of would be butchered.)  I hope that this quickly proves a catastrophe for Putin and Russia, that it backfires horribly and brings his regime down...

...because if it doesn't, if it is successful, this is just the start.  Georgia, Armenia, parts of the Baltics... why not?  Anything else on Russia's borders that's undefended and of interest?  And other countries are watching.  Is this perhaps China's answer to the problem of Republic of China on Taiwan?  Or the Senkaku (Diaoyu) Islands?  And if Western security guarantees are not meaningful, what kind of world are we about to enter?  One of greatly increased incentive for nuclear proliferation and increasing dominance by illiberal regimes, that's what.  And that's the sort of thing that leads to world wars.

The West ought to act now to crush Putin's plans.  I've already said what I think could be done.  But I'm skeptical that any of our political or business leaders care enough to bear the immediate costs involved.