Shaking and baking on the Froze to Death Plateau! Not a full blow-by-blow report, but at least a rough summary...

At the end of June, my frequent climbing partner Mats Roing and I mounted a little expedition to climb Montana's Granite Peak (3904 meters/12807 feet). Hitting the trail in the evening, we backpacked the three or so miles into Mystic Lake, arriving in the dark, and spent the night there. In the morning, after a short rain squall, we packed up to Froze to Death Plateau; upon arriving on lip just below the plateau, we were hit by a rainstorm, but quickly set up my North Face Ambition 35 tent, and napped for a few hours until the storm passed.

Once things had cleared we moved up onto the plateau, across which it's a seven mile trek to the high base camp below Granite. Montana had substantial late season snow and a very late arrival of summer, so -- as we expected -- we were confronted with substantial snowpack beginning at about 10,000 feet, essentially at the beginning of FTD. On the plateau we encountered high winds, sufficiently strong that we had difficulty moving forward -- I frequently found myself simply planting feet and trekking poles and bending over to try to avoid being knocked off my feet. I am still quite surprised I wasn't bowled over a few times. We struggled into the basin below Froze to Death Peak, where there are some rock shelters for tents. As the photos show, FTD was essentially a solid snowfield beyond this point, and most of the shelters sat in streams of snowmelt, but one had a deep base of snow behind it. Realizing there'd be no decent camps beyond this point for some miles, we packed down a nice platform and pitched my NF Rock 22 here.

Lovely camp, as the photos show, but what a night! We were varyingly pounded by rain, hail, sleet, and snow, and the high winds half flattened my poor little Rock, which is supposedly a three season tent meant for camping in genteel pastoral settings. Especially fun were the frequent flashes of lightning that lit everything, despite our eyes being closed, followed by the earsplitting cracks of thunder one second later. In addition, we heard an occasional roar as great chunks broke off of cornices hundreds of yards from us and fell of the plateau.

Despite all this excitement I slept pretty well, as did Mats. In the morning we chipped ice off the tent and crawled out to weather that seemed to change every ten minutes or so. Given these conditions, and the increasingly rotten condition of the snowpack, a summit attempt seemed extremely doubtful, and we bailed. The hike out was enjoyable, and we spent some time with our ice axes cutting a trail through a short and particularly steep snowfield we'd traversed earlier, that the next climbers might avoid the annoying traverse. Incidentally, other than a coyote, a few birds, and a set of goat tracks, we saw no evidence of anyone once we were above Mystic Lake.

No summit and little progress towards it, but a great trip nevertheless! 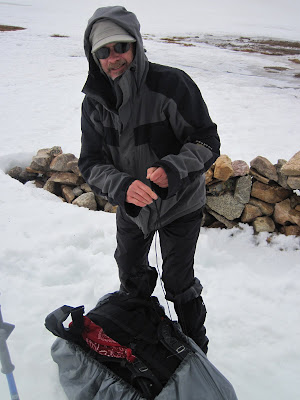 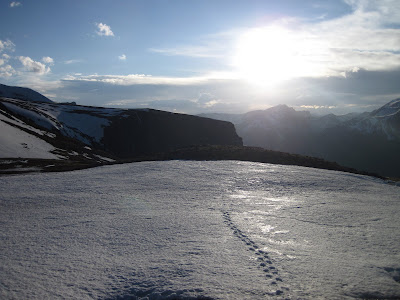 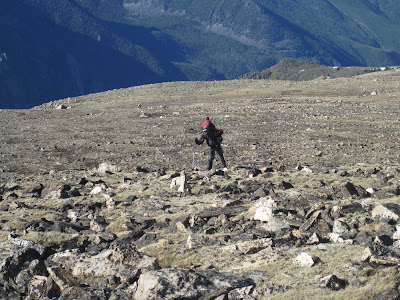 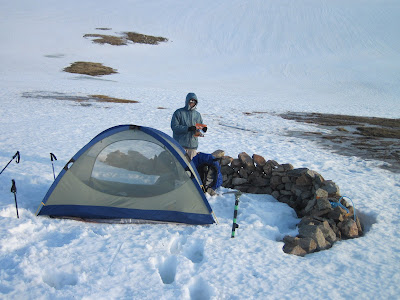 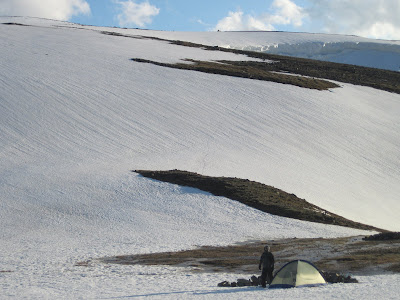 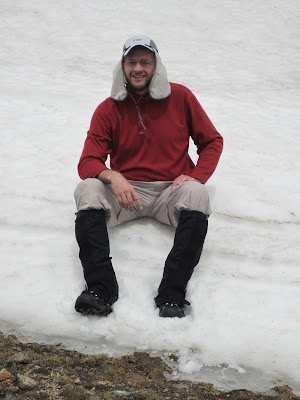 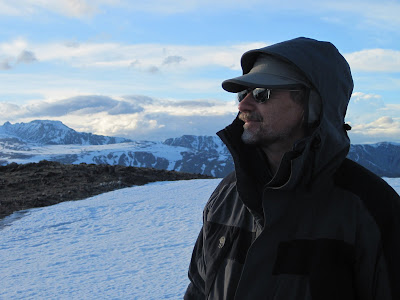 No blogging for awhile, because I've been busy with some high altitude matters. But as the pensive look in my eyes makes clear, I'm not failing to give proper attention to the world situation. Commentary will be forthcoming, but expect adventure reports first!