"Individual rights are the means of subordinating society to moral law. " Ayn Rand

It’s the sort of thing I’d expect to find perpetrated by the villains in "Atlas Shrugged."

On March 7, the Harvard Law School Project on Law and Mind Sciences is hosting the "Third Conference on Law and Mind Sciences: The Free Market Mindset: History, Psychology, and Consequences." A careful look at the conference abstracts reveals it to be a direct attack not only on laissez-faire and individualism, but on the most fundamental concepts of economics and the ethics and sanity of those who accept economics as well.

It’s a sign of the success of economics that its critics find it necessary to try reducing a well-developed body of thought and research to a psychological "mindset," and an aberrant, immoral, and destructive one at that. But in the current climate of government growth without obvious bounds, it is also extremely dangerous.

Stimulus, Multipliers, and The American Recovery and Reinvestment Act of 2009

Suppose for a moment an island economy of four agents. Of the first three, each produces a unique good (e.g. one produces clothing, one produces food, and one produces drink), and all are fully employed, i.e. maximizing production. There are no other goods, and the fourth person, unemployed, produces nothing. Suppose too that the people on this island use a fiat currency to facilitate trade (three traders is a sufficient number to ensure that double coincidence of wants isn’t guaranteed).

How might the plight of the unemployed person be alleviated? There seem two answers: 1. Goods could be transferred from the other individuals to the fourth, i.e. redistribution of the total output.* 2. The fourth individual could work and add to the total product.**

Now let’s subject our little economy to a couple of thought experiments. In Experiment 1, suppose we take additional units of currency and give them to the unemployed fourth individual. It doesn’t matter whether we take them from the other three, create them, or borrow them from abroad, just that we stimulate this economy. What happens? The individual purchases goods from the other three, redistributing the total product; if we’ve created or borrowed new currency in the process, prices ought to increase as well. Regardless of how we finance our stimulus plan, the total output is unaffected, and the fourth’s gain is offset by the reduction in the others’ consumption.

Next consider Experiment 2. We take the additional units of currency and give them to the fourth individual, with the proviso that s/he produces something the others will want to consume and sell them in the market as well. In this case, the total output is increased, and the fourth’s gain isn’t accompanied by a reduction in others’ consumption, so long as her/his product now available to the others offsets the reductions in their consumption of food, drink, and clothing.

One might make a nice micro homework problem out of this by adding utility functions and production functions, maybe add some sticky prices or capital market imperfections for a macro problem, but my purpose is simpler: I want to ask "where is the multiplier?" In both experiments, we’ve spent additional units of currency. In case 1, there’s no multiplier, because there’s no increase in production. In the second, there’s a "multiplier" effect because an unemployed input becomes gainfully employed, and production increases. Note that had we conducted the first experiment by having the unemployed individual engage in activity that produced nothing of value (e.g. repeatedly digging a hole and refilling it) the case would be no different, although the measured rate of unemployment would fall.

To explore this further, suppose there’s a fifth person on the island, also unemployed. In either experiment, person four can pass some of the new currency to five so that five also gains claims over the total product. If five must contribute to the product to get the cash, then there can be a multiplier from this too, otherwise no. When four starts producing, and his spending sets five to producing, we start getting something that looks like the classic spending multiplier. But note that if four digs useless holes, and sets five to doing the same, there’s no multiplier at all.

I’m hoping this is starting to sound like Jean Baptiste Say instead of John Maynard Keynes. Keynesian hokum about inadequate purchasing power violates a fundamental law: we cannot possibly consume more than is produced. Total output is the fundamental constraint. Oh, sure, we can consume more today than we produce today, by consuming yesterday’s production (capital), but we’re constrained by the total we produce. The only way to get a multiplier is to produce more - it is not increasing purchasing power, it is not putting people to make-work, it is producing more. And it can only do this by putting unemployed inputs to productive work, and underemployed inputs to higher valued work. And no matter how many individuals we add to our model economy, this remains true.

With this in mind, consider The American Recovery and Reinvestment Act of 2009. I haven’t yet had time to read the full text, but I read a substantial portion of the original H.R. 1, enough to see that too much of it looks suspiciously like a run of Experiment 1...only instead of a thought experiment, it’s being run for real to the tune of USD 750 billion. Of course, it is very possible that some of the spending in ARRA will actually be on productive things, and to that extent "stimulus" might make sense. But I have no idea why Congress or federal agencies should be able to systematically pick productive projects, and I do understand the perverse incentives that lead politicians to select projects that deliver a small amount of concentrated benefits for a large amount of dispersed costs. Hence I tend to doubt that Congress has systematically picked winners in ARRA.

Also, my simple account of Experiment 1 neglected the possibility that when we set person four to a useless task, s/he uses some scarce resource in doing so, reducing the output of persons one through three. It’s a given that ARRA will draw resources from other activities, and hence runs a risk of generating negative net product.***

And aside from whether good projects are selected, the federal government has a particularly poor track record of executing projects in a cost effective manner. There’s no particular reason to think that this has changed. Certainly nothing has changed in the incentive systems government officials face. Even a good project, badly executed, becomes a net destroyer of capital.

In sum, a stimulus can have a positive net effect, a "multiplier," but only by stimulating genuine productivity. The wrong stimulus has zero or negative effects. There’s production, there’s transfer, and there’s waste and destruction. Our crisis was brought on by misallocation of capital into real estate and equity bubbles. Further misallocation doesn’t solve this, but simply plants the seeds for more trouble. ARRA was passed in a white heat, with Barack Obama predicting doomsday if it didn’t. The spending was not carefully considered, and the danger is that we’ve bought a plethora of pet projects, an orgy of pork. If so, it will prove to be our economic version of the PATRIOT (sic) Act.

I suppose my "many regular readers" (I’ve occasionally heard rumors I indeed have readers!) find all this obvious and wonder why the to-do. Unfortunately, there’s a growing chorus of voices in the media, in government, and most unfortunately in the economics profession who claim that objections to government stimulus are just "ideological," a matter of mere tastes for private over government solutions. Anyone who doubts the stimulus multiplier is dismissed as an ideologue. The only "scientific" question is whether the ARRA stimulus is big enough. Paul Krugman is among the most blatantly dishonest here, but even the staid Menzie Chinn joined in, to my surprise. (See my brief exchange with him in the comments.) But there’s nothing ideological in the above. Expending scarce resources on useless projects may "put people to work," but it remains consumption of capital, and is simply more of what Adam Smith called decay. The idea that stimulus is stimulus and spending solves problems of capital misallocation is just crazy nonsense. Waste is waste, and it makes us poorer, not wealthier.
---------------------------------------------------------------------------------
* Note that whether the transfers are voluntary or involuntary is irrelevant for the question at hand.

** As with the previous footnote, whether the unemployment is voluntary or involuntary is not at issue.

***I understand that Paul Krugman is now claiming that there's no such thing as "crowding out," that it's a discredited economic doctrine resurrected by Republican partisans.

That's the annual rate of inflation in Zimbabwe last year, according to an AP report today.

"Last year, official inflation based on the tumbling local Zimbabwe dollar was given at 231 million percent but the state statistics office said it was no longer able to calculate the inflation rate because of acute shortages of gasoline, food and most goods that spurred black-market dealings."

We're failing to learn these lessons now, unfortunately. The current global economic debacle stems in large part from the mentality that seeks wealth without production, and consumption without cost. Now that the painful adjustments have begun, we're trying to sidestep them with more fiscal and monetary stimulus. Thus we compound the mistakes of the last twenty years with ill-considered "bailout," "stimulus" and now "foreclosure rescue."

Currently these projects are financed by borrowing. Any dollar "invested" in these schemes that doesn't earn a positive net return will have to be paid for somehow... and that somehow have to be taxes, or default, or monetization. Given all the "careful thought and deliberation" that went into H.R. 1, I fear these losses will be substantial. We won't be anything like Zimbabwe, but I don't think the outcome is going to be happy.

Today Geert Wilders was denied entry into the U.K., because his film "Fitna" goes beyond acceptable speech.

Watch the film (available below), and then explain to me why "Fitna" is unacceptable, but the following is acceptable.

20 Feb. update: as I expected, You Tube has again removed "Fitna" for terms of use violation. One can find all sorts of crazy pro-Islam nonsense, but this beautiful and thought-provoking film is beyond the pale for them, too. If anyone has a stable source for the film, please let me know.

Update: CLS keeps the film available on his excellent blog. For the URL, check the first comments for this post. 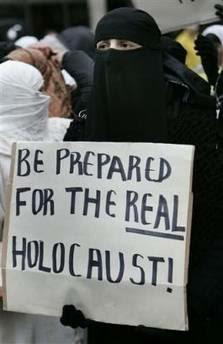 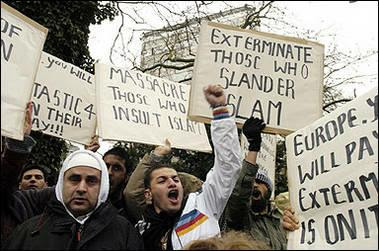 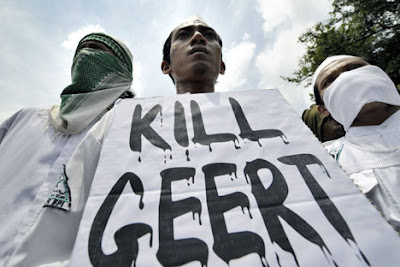 ... links to two Cato policy papers on the economic mess, written from an Austrian perspective...

They are by Larry White and Gerard O'Driscoll.