The hysteria over President Trump's "ban" on immigration from seven countries associated with jihadist terrorism is contrived and a bit bizarre.  First, it's contrived.  The left and progressives were waiting for this.  The professional "demonstrators" were already in waiting for this. Given the craziness of the MSM theme "This Changes American History," I believe the articles were pre-written and cued up.

Second, checking would-be immigrants with worldviews (Islam) and from regions from which terrorist groups regularly recruit is very sensible.  Why did opposing this become a progressive cause?  ...or, good heavens, a "libertarian" one?  Supposedly, according to the left, these immigrants are escaping from areas held by Daesh and similar groups.  In what kind of insane, suicidal thinking does screening them to make certain they aren't jihadis become even a bit objectionable, never mind the hysterical comparisons to Nazism?

In fact, I think (as do others, it's hardly my original thesis) that the progressives are utterly unwilling to ever accept any presidential election unless they win, and are working to destabilize and overthrow Trump.  They have plenty of useful idiots who can be counted on to howl with outrage on demand at anything Trump does.  This is a good example.  Let's hope the progressive strategy fails miserably and they destroy themselves in the process.

Posted below is a snapshot of bizarre email I received from ACLU on 8 December of last year; I think it nicely illustrates my point.  The left has been preparing for this.  Also, "the truly terrifying prospect" of actually checking immigrants to see if they are sympathetic to or connected with Daesh and similar groups is not terrifying at all.  It's simply good sense.  What is truly terrifying is that ACLU and progressives in general want unrestricted immigration are quite willing to admit homicidal terrorists into the country. 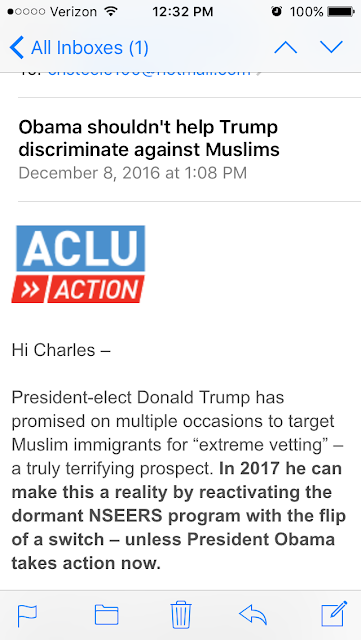