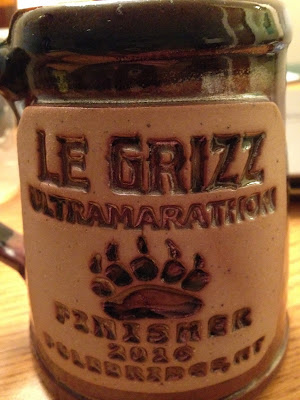 As careful readers will already have noted, yesterday, 8 October, I completed my 16th Le Grizz 50 Mile Ultramarathon in Montana's Flathead Valley.  Here are some details:

As last year, we ran the new North Fork course, under the sponsorship of the Polebridge Mercantile.  This is the old government shutdown course from 2013, running along the western boundary of Glacier National Park (GNP).  My crew this year year consisted of my lovely Julie and longtime friends Jeff Ross and Marc Pittman.  I know both of them from our undergraduate days at Montana State -- I've known them longer than anyone I'm not related to.  Both grew up in the Flathead, Marc stll lives here and Jeff makes an annual pilgrimage here with me for the race.

The race: as usual, Jeff, Julie, and I stayed in Mini Golden Inns in Hungry Horse, MT.  Marc showed up at dark thirty AM, we loaded gear in his pickup, and set out for Polebridge.  I took the early start, an option for those of us who want to get to the finish line beer and chicken sooner.  At least, I think that's what it's for.  (I discount the rumor that it's for people who are so slow that passing trees requires acceleration.)  I picked up my race number and prepared to run.

At 6:30 AM Pat Caffrey touched off the Official Le Grizz 12 Gauge Starting Device, and we were off! in the pitch dark.  I've been having some troubling hip pain, and it bugged me early on, a somewhat unsettling omen.  I feared I had an increasingly painful day ahead of me.  I ran with several different people: Tim Marchant, who, like me was after his 16th finish, David, an ultrarunner from WI who was on the flight with us, Beth, a writer from Brooklyn NY, and Rebecca, a ranger from GNP, and, of course, Jeff Ross on his bike.  We watched the sunrise, watched whitetails run from us, heard the bugling of either a bow hunter or a bull elk with laryngitis.  Running like this is fun.  You're not running fast, it's easy to talk, and the scenery is beautiful once there's daylight.  It began to drizzle at 8:30, half an hour before the Weather Underground predicted time of 9:00, and rarely stopped for the rest of the day... except when it was raining.  Marc and Julie drove the pickup, and met us about every 5 miles with water and Perpetuem.

The first part of the run heads south from Polebridge for about 10 miles and then back, thengoes north for 15 miles and back.  Jeff rode with me for about 15, and then Marc took over and said he would run with me for the next 4.5 miles to Polebridge.  He hadn't done a run longer than 2 miles for months but felt he could handle it.  He did.

At Polebridge, my crew all went to the Merc for pastries and coffee while I continued north.  Oddly, my hip was getting better, not worse, and I was feeling remarkably good.  As I climbed up the big hill from Polebridge, I heard some crashing in the trees over the edge of the road, either a moose or bear I guessed.  I looked over, saw a patch of black fur and thought "moose," but a could of steps later had a clear shot and saw a very large black bear running straight away from me.  I had a really excellent view of him at maybe 40 yards.  Black bears don't alarm me at all, I was just very excited to see it, and called to a couple of runners behind me "bear" and motioned for them to run up to see.  They looked startled,almost as if they would turn and run the other direction.  I told them it was running off, and that there was nothing to worry about.

After that, well... there was more running, and running, and walking, and running.  Two miles before the turnaround at Trail Creek, Marc decided he would run another two with me and have Julie pick him up at the turnaround.  Thanks to miscommunication, Julie thought she was to wait, which gave Marc an additional four miles.  So what the heck, after a one mile break he ran more with me, and ended up with around twenty miles.  Yes, we are signing him up to race next year.  Jeff will really have his hands full.

As the run went on, I felt increasingly good and pain-free, although increasingly tired for some reason.  I had a strong finish over the last miles and managed a fairly good "sprint" across the finish line for number 16.

Support crews have the hardest work on race day; they are the most valuable people on the course.  So this morning I took my support crew to breakfast at the always excellent Buffalo Cafe in Whitefish.  And this afternoon, Julie and I did a short trip into GNP.  Spectacular!

That's it.  Another excellent day at Le Grizz!  As triathlete Sally Edwards once observed, "if you're not having fun,you're not living."  Running Le Grizz is living. 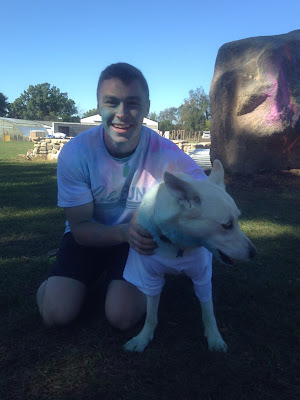