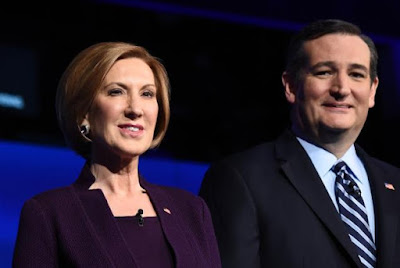 This is the first presidential election in decades in which a candidate whom I think would be a very good president still has a good chance of winning this late in the season. That candidate, Ted Cruz, has been endorsed today by another of my favorite candidates, Carly Fiorina. Fiorina not only endorsed Cruz today, she introduced him at a Cruz rally in Florida.

My dream ticket would be Cruz-Fiorina ... could we be on the verge of this? Please let it be so! This ticket would make sense, and it would win.

It would make sense, because both Cruz and Fiorina are consistent supporters of reducing government and restricting its power. Both understand and are serious about fiscal responsibility. Most importantly, both understand that individual rights are inalienable and that our rights are superior to government authority. Maybe Rubio believes this as well, but Trump and Kasich don't, and the Democrats regard these ideas as dangerous extremism. (Democrats are dangerous extremists.)

It would win, because both Cruz and Fiorina are unusually intelligent and articulate, and because they have a consistent set of principles, they can -- given the chance -- promote these principles. They'll crush Democrat opponents in debates.  They will persuade voters to support them.  This last point is neglected in all the polling on who would beat whom in November match-ups, as if people are incapable of discussing arguing, and persuading each other.

Cruz would annihilate Clinton, Sanders, Biden, or Warren in debates.  Fiorina would annihilate Warren, Deval, or whoever else was put against her as V.P.  The Cruz-Fiorina ticket would be powerful and would win.  They would proceed to try to reverse the expansion of government.  Most importantly, they would not be nominating leftist Supreme Court justices and they would constrain the federal bureaucracy (it is the executive branch, after all).  Trump would never do these things.  Neither would Kasich.  Maybe Rubio would, but he seems quite a compromiser.  Cruz and Fiorina mean hope for liberty.

Currently, Trump is not gaining support -- his support in Michigan and Louisiana was much higher among early voters than among day-of-election voters.  While Trump stagnates, Kasich and Rubio are drawing votes to clearly hopeless campaigns.  It's not conceivable that Kasich voters would switch to Trump if kasich quits, and very few Rubio supporters would be likely to switch to Trump.  Without these two, Cruz would now be ahead of Trump.

There's still hope that Cruz can defeat Trump.  Rubio and Kasich cannot.  They might be able to save Trump, though.  They should get out now!

Note: for the first time since, I think, 1968, there are only two presidential campaigns to which I have donated money: Cruz, and Fiorina.  This really is my dream ticket.