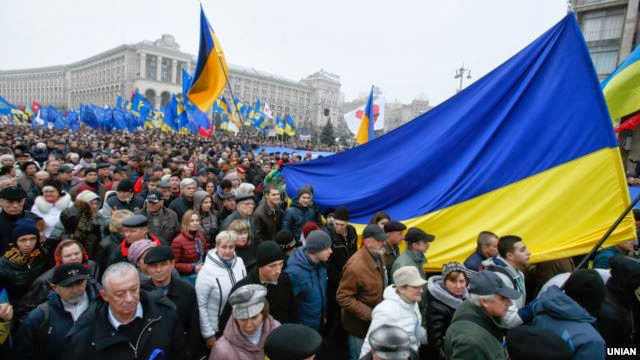 
I've not blogged for quite awhile, owing to an unusually busy and difficult semester.  That's a bit unfortunate, because so much is happening that I'd like to comment on.  Well, after mid-December we will be back in action.  (For one thing, we will be crowing because so far we are batting about 80% on our predictions for 2012!)

But events in my old home, Ukraine, won't wait.  If you haven't followed the story, Ukraine's 2004 Orange Revolution threw out the corrupt pro-Russian/Soviet leadership in favor of a pro-West pro-market president and government.  Unfortunately, while liberal in the classical sense, Yuschenko was also ineffectual (there's something about having Russia's FSB/KGB attempt to assassinate you that makes you cautious, I guess).  His opponent and Putin's favorite Ukrainian Viktor Yanukovych managed to win the 2010 presidential elections.  He set about turning to Russia, reducing ties with the West, and increasing corruption and authoritarianism.  Ukraine's perpetual struggle to break the shackles of Russian domination was dealt another blow in late November of this year, when Yanukovich refused to sign a free trade agreement with the E.U. and instead gave indications he would join Russia in the Shanghai Cooperation Organization (SCO).  In other words, Yanukovych turned down a chance for closer ties with the free world (this term still has meaning in East-West terms) in favor of those bastions of liberty and prosperity, China, Kazakhstan, Kyrgyzstan, Russia, Tajikistan, and Uzbekistan.  Just think... if he plays his cards right, Putin might even "let" Ukraine join the Belarus-Russia Alliance!

Ukraine's parliament, the Verkhovna Rada, held a vote on "no confidence" in the Azarov government, but it failed; the opposition had 41% of the Rada, but needed to break 50%. What's left?  It's now in the hands of the Ukrainian people themselves.  There will be turmoil and civil disobedience, of course.  And, I hope, further political action that will bring down the Yanukovych and install a pro-reform, pro-freedom, pro-independence leadership.  We at Unforeseen Contingencies fervently hope that the Ukrainians prevail over the Russians, and that Ukraine retains its independence and is able to advance freedom.

So far as I can tell, the U.S. government is largely neutral (neutered) in this affair.  Obama is either in Putin's thrall or sees this as a way to further wreck the West... or maybe he simply doesn't care.  Regardless, the soft power Obama was supposedly going to wield doesn't exist, and America is out of the picture.

But more interestingly for me, despite the entirely different histories, cultures, demographics, geographies, and institutional arrangements, America and Ukraine seem on strangely parallel courses.  Like Ukraine, American is now in the hands of a leader who is a lawless thug, one who spouts utter nonsense and pursues destructive policies that ruin the country and sell its people into vassalage, but build his and his political cronies' power and wealth.  Congress seems unwilling or unable to respond.  The Supreme Court is complicit.  As in Ukraine, it is left to alternative powers to try to stop the destruction.  In our case the alternative powers are not just the people but also the States -- our federal system gives us an additional check on the federal government's power, and in many respects Americans'** position is much stronger than that of Ukrainians.  Still, both countries are in dire straits, burdened with dangerous leaders who are selling out what freedom we have for their own benefit. Both are in danger of being saddled with institutions that will impoverish us and leave us beholden to governmental masters.  May heaven help us and may freedom prevail.

I'd like for that to be the end of my post.  Given the extreme threats to life and liberty that we're seeing from our federal government, I'd like it if we could minimize the discord in the libertarian and quasi-libertarian camps.  But alas!  Never failing to disappoint one's lowest expectations, Lew Rockwell and his band of pseudo-anarchist pseudo-libertarian pro-communist idiots are all in favor of the Berkut beating the heads of my friends in Ukraine for daring to protest.  You see, the EU is actually the new USSR and Vladimir Putin is Ukraine's bulwark against totalitarianism.

Yeah, right.  This is simply lunacy.  But it's par for the course.  Keep in mind that their leading light, Murray Rothbard, went to extreme lengths to defend Josef Stalin on "libertarian" grounds.  Ugh.  But if this is how Rockwell, Raimondo, and the rest of them feel, they should contact us here at Unforeseen Contingencies.  We'll be happy to arrange for them one-way tickets to their destinations of choice in the SCO... provided they promise to stay there.

-----------
* First line of Ukraine's national anthem.  The ideas in the first verse are worth contemplating:

Ukraine has not yet perished, nor her glory, nor her freedom,
Upon us, fellow Ukrainians, fate shall smile once more.
Our enemies will vanish like dew in the sun,
And we too shall rule, brothers, in a free land of our own