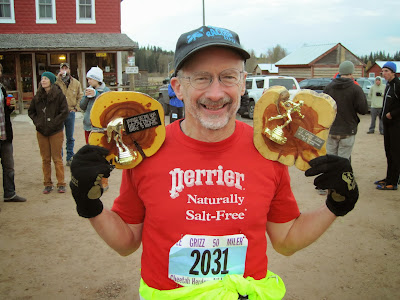 Just finished the 32nd running of the Le Grizz 50 mile ultramarathon, my 13th.  In addition to the usual finishers' trophy I was also called forward the receive the "Government Shutdown Award," in recognition for what Race Director Pat Caffrey described as "the most volatile commentary on the government shutdown and how it affected Le Grizz."  The trophy (the one in my right hand in the photo) features a horse's patoot, as my father was wont to call it, plus the inscription "Government Shut Down Award. If a tree falls in the forest and a politician hears it, he will blame someone.  Le Grizz XXXII."  Unforeseen Contingencies -- now an award-winning blog!

(Full report to follow with photographs and wolf stories.)