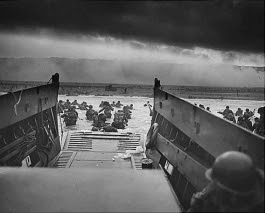 It's the 69th anniversary of the Normandy Invasion.  It's worth taking a moment to remember this and similar events for a number of reasons.  The war itself was a tragedy, brought on by destructive philosophical, economic, and political doctrines and decades of bad policy guided by them.  The invasion itself was a very risky maneuver and not at all prudent, yet also necessary.  For those who assaulted the beaches, the undertaking was extremely dangerous with a very uncertain outcome.  To them, much more than to the political leaders who sent them, we should be grateful.

It's customary for libertarians to ignore or deride occasions like these, because of libertarian opposition to the doctrines that led to the war.  This is a bad mistake.  Those who fought against Nazism were doing something that was, by that point, absolutely necessary.  I will at some point be continuing my "Reclaiming Libertarianism" series, but for now it's enough to note that tyranny must always be resisted; a "libertarianism" that holds otherwise isn't worth much.

Washington Post has today broken the news of the massive NSA PRISM program, an enormous spying and data mining program that includes the cooperation of major internet companies including Google, Microsoft, Facebook, and Apple.  With this, and the previous IRS, AP and similar scandals, anyone who doesn't think the federal government is dangerously out of control must be a member of the political class, happy at the prospect of a police state.  I frequently hear friends, colleagues, and others despair that an authoritarian nightmare is imminent.  Maybe.  I have been working on a post showing that elements of the federal government are preparing for a possible war against the American people.  The situation in America is truly dangerous; we are in an unusual state of uncertainty where major shifts of direction are possible.  But uncertainty is also opportunity.

We don't have a police state yet, and I think we won't have one, if we, the American people (or enough of us) refuse to comply.  Consider this calculus.  There are approximately 750,000 law enforcement officers in the United States.  Many of them, probably the majority, are opposed to a police state and everything it entails, including confiscation of privately held firearms.  But suppose that 100% were willing to obey any order, including those that established a police state.  Add in the roughly 2.3 million of the U.S. military -- again, probably most would be opposed to working for an unConstitutional police state -- and that's 3 million for the state to draw upon.  On the other hand, there are 80 million American gunowners, and it doesn't take a gun to resist a police state.  Those are not good odds for anyone betting on being able to physically impose a police state.  Even if only Three Percent resisted, the odds are overwhelmingly against the political class.  This is why they are so desperate to disarm us, and -- more importantly -- to intimidate us.

So long as a substantial core of Americans refuse to be disarmed and to otherwise comply with statist diktats, we'll remain a basically free people.  And right now, advocates of individual liberty and limited government do have the upper hand.  We can sneer "Come and take 'em," and they don't dare. We are in a much stronger position than some poor 18 year old in a landing craft at Omaha or Utah Beach.  But at the same time, we need to steel ourselves, we need to understand how serious this fight is, and we need to work peacefully to constrain and dismantle our out-of-control government now, because if we fail to do this, it will be imposed on us that we do it unpeacefully.

Note: Mike Vanderboegh's D-Day post uses the same photo I do.  This is coincidence (synchronicity?) but I should note that the photo is from the U.S. Army D Day website and in the public domain.

Comments:
Very pointed and intelligent analysis you make. So, let me say thank you, as a European. NV