My letter to Carl Levin 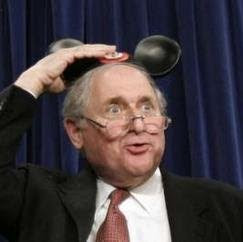 A few minutes ago Senator Carl Levin (D, MI) sent me an email update in which he brags about his recent work investigating Apple, Inc. for not paying more in taxes.  In case you missed this story, no one, at any time, in Levin's subcommittee hearings ever suggested that Apple broke the law.  Instead, Apple was accused of using perfectly legal shelters and deductions that Congress itself designed.  In other words, Apple paid exactly what the tax laws call for.

Here's the text of Levin's update, followed by my reply to him:

Levin: Loopholes, offshore profit shifting cost billions
Apple Inc. has used a complex web of offshore entities - including three foreign subsidiaries the company claims are not tax resident in any nation - to avoid paying billions of dollars in U.S. income taxes, a bipartisan investigation by the Senate Permanent Subcommittee on Investigations, which Sen. Levin chairs, has found. The findings are the latest in a series of examinations the subcommittee has done to show how multinational companies exploit loopholes to avoid taxes, which raises the deficit and the tax burden on working families.

It is outrageous that you attack a major U.S. corporation for following the tax law.  Your antics at the subcommittee hearings were shameful.  Apple's behavior does not cost billions; the billions for which you lust do not belong to you, the government, or the taxpayer.  They were earned by Apple and retained legally by Apple.

You should do the honorable thing and apologize, and then resign immediately.  You are not fit for public office.