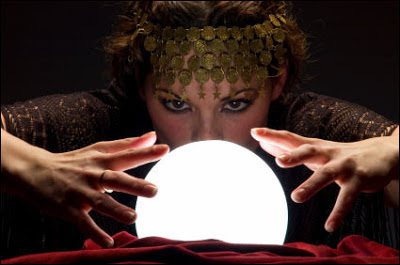 On the last day of 2011 "we" at Unforeseen Contingencies made ten predictions for the coming year.  Today, the penultimate day of the year, seems a good time to check how our prognosticating powers served us.  While this undertaking has, like everything else on the internet, been first of all for our own amusement,* there's something to be learned here.

First, as a general rule, the best single predictor for future values of any variable are the past values, and for short term prediction, it's the "present" (most recent) value.  Second, if one does predict change, it should be on the basis of some sort of rationally established theory.  In other words, don't predict anything to change unless you have a good reason to.  With this in mind, let's look at UC's ten predictions for 2012.

We are pleased to report a "hit" rate of 50%!  That is enough to make a fortune on Wall Street, we're told.

Prediction 1: The various end-of-the-world predictions for 2012 will prove to be false.  Hit for UC!  With only about 24 hours or so left, and Nibiru nowhere in sight, claiming success on this one seems quite safe.  Even Harold Camping has given up on the-end-is-nigh predictions (although perhaps that should scare us all, since he always seems to get it wrong).  In fact, we're willing to make this one indefinitely, for as long as Unforeseen Contingencies is around.  The world is pretty solid, and will remain so for a very long time. That's not to say that the end of civilization as we know it might not happen.  According to NASA, 2013 may be a particularly bad year for solar storms, you know, of the sort that could knock out America's electrical power grids for months.  A few months w/o electricity and people will be eating each other.  But we are not making predictions here, we're just enjoying the fact that the world still exists and gloating that we got this one right.

Prediction 2: Someone in the "west" will engage in an overt military action against Iran. Miss.  So far as we can tell, this didn't happen.  Instead, most of the interested parties are fighting a proxy war in Syria.  I suspect this will continue for some time.

Prediction 3: Barack Obama will win a second term, defeating Mitt Romney in a close race. Hit! I'm particularly pleased by this one, since the forecast required some ability to discern what would ensue, and I think my logic was corroborated.  Despite the fact that hardly anyone in the GOP based seemed enthused by Romney, I figured he had the edge over his Republican challengers.  They tended to be poorly organized and very narrowly focused (e.g. Rick Santorum, who really could only appeal to the small share who vote on explicitly religious grounds) or prone to say kooky things at a moment's notice (e.g. Newt Gingrich).  Romney's organization proved surprisingly bad in the presidential election, just as McCain's had four years earlier.  In general I think the GOP is badly organized.  I also assumed Obama's organization hadn't gotten worse, even if his base was far less enthusiastic.  Hence a close race, going to Obama.

Prediction 4: TBTF banks will increase in size and share of the financial sector. Hit! The number of banks is shrinking, and the ones that are Too Big To Fail are bigger and badder and better connected politically than ever.  So points out Nouriel Roubini, and evidence from the Fed corroborates him.  OK, I was shooting ducks in a barrel with this one.  Roubini is right; this problem will not be solved given the current politicians.  The banks own them.

Prediction 5. The U.S. Supreme Court will fail to rule that the individual mandate in the Affordable Care Act is unconstitutional. Hit! I'm almost embarrassed by this success, because of the Alice-in-Wonderland "reasoning" employed by Justice Roberts to save it.  (See this and this as well.)  But as a general rule, assume that SCOTUS is loathe to overrule Congress, and will do so rarely.  Even so, I'm still astounded at the lengths to which Roberts went to save PPACA.  He'll go down in infamy for his dishonesty and crazy "logic."  Incidentally, this means Obamacare will figure in my 2013 predictions, to be issued tomorrow.  It won't be pretty.

Prediction 6: The United States will make no progress in getting their debt problem under control. Hit!  This one was quite hard to predict and I really went out on a limb here because...hahahahahahaha!

Prediction 7:The Eurozone crisis will deepen. Greece will go bankrupt. Unless the Germans agree to subsidize the rest, the Eurozone as a monetary union will break up.  Miss.  I certainly missed this one.  First, the Greek government seems to have managed to actually get their structural balance under control, and so far the Greek citizenry has failed to incinerate the entirety of the country in response.  Second, and even more importantly, the ECB has now decided to bail out European banks if needed.  Even Roubini got this one wrong.  The printing press to the rescue!  I now think the Eurozone may well survive...at the cost of printing press money, massive transfers of wealth from the productive to the unproductive, and capital destruction, of course.  That still amounts to Germany subsidizing the rest, but not in the way I suggested.

Prediction 8: China will undergo a sharp recession. Miss.  No recession, just a slowdown.  Timing is difficult.  Some think it's now behind them, but I don't.  Their shift from relatively free enterprise to investment in the politically favored state sector and pointless capital projects make their economy something of a house of cards.

Prediction 9: India and Pakistan will go to the brink of war. Miss. Thank heavens!  The subcontinent is a potential Balkans for a WWIII.  Every year we dodge this, India will grow and modernize (and maybe Pakistan too) and lead us away from this nightmare scenario.  Strength and prosperity make war less likely.  Happily the Pakistanis are currently focused on the U.S. drone strikes that have slaughtered innocent civilians willy nilly (Barack Obama is responsible for the execution of 158 more children than Adam Lanza, and hardly anyone cares) and their own butchery of children.  Meanwhile, Indians are justifiably more upset over the murder of a 23 year old medical student who was gang raped and then gutted by her attackers, and the state's general refusal to take such crimes seriously.  Or as Diane Feinstein so aptly put it, "thank goodness that at least she didn't have access to a gun, someone might have been shot."

Prediction 10. The U.S. unemployment rate will be roughly unchanged at 9%.  Miss. The official rate is now "only" 7.7%.  I missed it, but this one is worthy of multiple essays.  In lieu of such... First, here's a pointer about prognosticating: be sure you pick the variable you really want to predict.  Stupid me.  When I made my prediction in 2011, I was thinking that there would not be a substantial economic recovery in terms of employment.  But the unemployment rate, by itself, isn't the measure I should have picked, because it only measures the share of the labor force that is employed.  If the labor force shrinks, then the unemployment rate falls, since the denominator is shrinking.  And since the onset of the Great Recession the labor force participation rate has steadily declined by enough to more than generate the stagnation of which I was thinking.  Second, the evidence is that the fall in participation rate is concentrated among the people who certainly should be working.  It's been suggested that the retirement of baby boomers should indeed drive the LFPR down.  But since 2008, their participation rate has actually increased (who can afford to retire when portfolios are devastated?) while young people have dropped out of the labor force.  My own calculations (available on request) suggest that increased college enrollments can't account for this.  Here's a very good explanation of what's happening, and here's analysis from the KC Fed that corroborates it.  Both are somewhat technical and well worth reading, but for the punchline, here's a great piece by Celia Bigelow, one of my former students.  Anyhow, I missed this one.  And regardless, what is happening is bad news.

Wild Card Prediction 11: Scientists will announce discovery of life on a planet in another star system. Miss so far... but it's coming!

So there it is, "our" first annual prediction scorecard, with a respectable 50%.  Not bad, for beginners.

Stay tuned for our 2013 predictions, many of which will be quite dark indeed, unfortunately.

* Including one direct quotation which "we" attribute without source.  Some might call this "putting words in someone's mouth," but we think of it more as simply helping them apply their ideas consistently.  We'll let the reader decide.

Photo: a junior member of the Unforeseen Contingencies staff hard at work on our 2013 predictions.