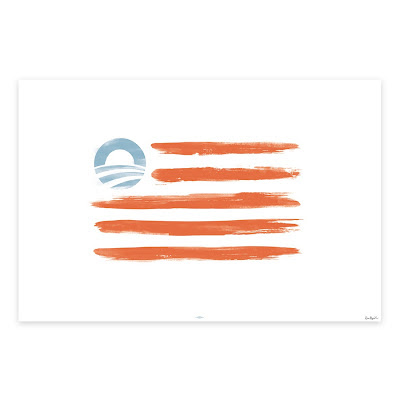 Back in May of this year, Weekly World News ran a story that Obama was replacing the American flag with a new Obama flag. I always supposed WWN was even less reliable than satirical "news" sources such as The Onion and New York Times. Well, as it turns out, apparently WWN scooped everyone on this. Obama's campaign is now selling Obama's new version of the flag.

Under U.S. Code Title 36 Chapter 10 Section 176(g) and (i) this is flag desecration, a violation of federal code. Not that this is anything new for Obama and Co., of course.

This is a cult of personality worthy of a third world dictator, placing Obama's "coat of arms" (or whatever that asinine Obama logo is) on the national flag.  I also note they have a version of this flag drawn on the shape of the continental U.S., I guess to show that it's Obama's property.  Obama, following in the footsteps of such great statesmen as Turkmenbashi?  It appears so.

I'll bet Republicans are now happy they failed to pass a flag-burning amendment.

It appears to me that this is not an effort to supplant the American flag with an Obama flag, but rather a mere art print sold to Obama supporters. (I do not think any actual flags are even produced. This is essentially an image for hanging on a wall.) I would be interested in your thoughts as to how this kind of image is qualitatively different from the Ronald Reagan flag images that can be purchased on this site: this site. These flags actually do have Reagan’s face on them, and one can have them printed on T-shirts, mugs, baseball caps – you name it. Would you also condemn this kind of memorabilia?

While there are many legitimate criticisms of the Obama administration, I do not think this is one. This is just campaign art.

Thanks for your comment, Gennady. I agree that this isn't a genuine flag, "just" campaign art. Most of what I am saying here is making fun of the situation.

However, this is indeed a violation of Federal Code. (So are the Reagan items. I've previously attacked conservatives for this same thing. It is particularly outrageous that the President's own campaign and his supporters would do this, IMO.

The law against flag desecration appears to be one of those strange prohibitions for which there are absolutely no penalties. As the Flag Code page states, “This code is the guide for all handling and display of the Stars and Stripes. It does not impose penalties for misuse of the United States Flag. That is left to the states and to the federal government for the District of Columbia.” To my knowledge, there are no criminal sanctions for desecrating the flag.

The norms of conduct described in the Flag Code are rather strict and prohibit the use of the flag “for advertising purposes in any manner whatsoever” (which places pretty much every political campaign in violation – except, interestingly enough, those of Ron Paul and Gary Johnson, which have not used flag imagery to my knowledge). Also, many Fourth of July parties would be instances of gross violation (with all of those flag napkins), and a lot of “patriotic” clothing is in violation as well. What is interesting here is that the people who like to (literally) wear their patriotism on their sleeve are the ones most likely to run afoul of the flag etiquette.

But this also raises another set of issues. As a metaphysical, methodological, and ethical individualist, I see the flag as a symbol, rather than “a living thing” (§176, (i)). If the flag is supposed to represent in the abstract the ideas at the core of the United States, then one of these ideas must surely be the freedom of expression and the freedom to dissent. This leads to the conclusions that (i) flag etiquette must be highly contextual and must depend on the intent of the person using the flag or flag imagery; and (ii) forms of expression that desecrate the flag must be permitted if one is to uphold the principles for which the flag stands – as long as those forms of expression do not degenerate into violence against people or against property that one does not own.

Thanks for your comments.

Gennady, you are correct that there are no penalties nor provisions for enforcement of the flag laws. And in my opinion, this is proper -- freedom of expression, including the right to do whatever one wishes with the American or other flag or symbol, should be inviolate (so long as one doesn't in the process actually violate someone else's rights, of course). However, President Obama swore an oath to uphold the Constitution (to the extent he could, given John Roberts' bobbling), and his campaign should be held to a higher standard than what natural law demands. He and his campaign ought to show respect for the institutions involved, and for the spirit of what this country is supposed to be about.

PL, I don't support such laws. This post is expressing my contempt for Obama and the utopians who think he's the Second Coming.
However, I do support unequal treatment under the law for those who accept political power. They should be held to higher standards than the rest of us -- for example, I think anyone accepting political power should agree to accept the death penalty in case they commit treason, bribery, or other high crimes and misdemeanors, or other serious violations of the Constitution or of individual rights. So maybe you are on to something, there should be penalties for a President who desecrates the flag.

P.S. I neglected to mention in my above reply to PL that otherwise I am against the death penalty, for the one reason J.S. Mill identified as legitimate.