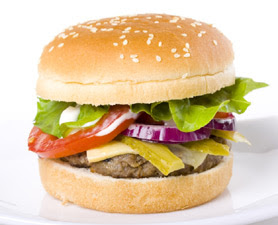 What is the libertarian position on the truth or falsity of anthropogenic global warming (AGW)?  Here's the answer: there isn't one.

Libertarianism is a political philosophy, and as such independent from hypotheses from sciences such as climatology, biology, geology, etc.  If you Google "libertarian climate change," as you'll find more than enough climate change denial, sometimes expressed as being the "libertarian" position.  But you'll also find libertarians who believe in AGW, and discuss how it might be addressed.  It's an important point, because to suppose libertarianism is a complete worldview undercuts the one important point that libertarianism offers and nothing else does -- an argument for the protection of every human being from being coerced, enslaved, and generally treated like prey.  No other philosophical position offers a consistent defense of individual rights.  Confusing libertarianism with claims about other matters, e.g scientific issues, is wrong and undercuts the arguments libertarians make for liberty.  A similar argument applies to economics and AGW, of course.  As an economist, I have no professional opinion at all on the truth status of AGW; it's not my field.

I mention this because I've just encountered two quite separate instances of the conflation of libertarianism with scientific issues.  The first appeared on the Science-Based Medicine (SBM) blog.  During the 2012 edition of James Randi's TAM (The Amazing Meeting) in Las Vegas, one of the TAM conference speakers, Dr. Steve Novella, debated an anti-vaccinationist...not at TAM, but at Mark Skousen's Freedomfest, going on simultaneously at another conference venue.  (Wow, I considered attending both of these...had I realized i could have done it with one trip, I'd likely have gone!)

I'll state upfront that the anti-vaccine campaign is one of the craziest and most dangerous of the pseudo-scientific "health" movements.  The Freedomfest debate is covered quite nicely on SBM; suffice it to say the anti-vaccinationist loon was crushed and publicly humiliated.  But to the point here... why would a debate about the efficacy of medical treatments be a libertarian issue?  It is decidedly not!  Why would Mark Skousen include, multiple times, a kook whose shtick is that vaccines are harmful in a conference devoted to exploring liberty and free markets?  (Disclaimer: I know Skousen and consider him a friend.  He even guest lectured in several of my History of Economic Thought classes this past spring at [Dilorenzo Rule redaction] College; great lectures, btw.  I may have a word with him on this.)

Only a day after I saw the SBM post, FEE's Freeman Online featured an article telling the harrowing story of a man who has been threatened with criminal prosecution by the State of North Carolina for blogging about his successful experiences with the paleo diet -- after all, he does not have a state certification in dietetics.  He's even been commanded not to discuss diet in private phone conversations.  The first half of the article does a lovely job exposing this outrageous violation of free speech, but midstream it becomes bogged down "explaining" why the "conventional wisdom" is wrong and the paleo diet and other low carbohydrate diets are healthy.  The arguments are quite weak, IMO, but more to the point, why is this relevant?  Suppose the individual in question were promoting utter nonsense, a la breatharianism.  The political issues would be the same.


As I suggested in a comment, the validity of the paleo diet is irrelevant; there should be complete freedom to express ideas, whether they are sense or nonsense.  Furthermore, there’s no reason to think government regulators are capable of distinguishing between the two, nor that they have an incentive to do so.  The argument for liberty is independent of the scientific truth content of the paleo hypothesis, and it is a grave error for libertarians qua libertarians to adopt extraneous baggage such as positions on AGW, vaccination, and diet.


It's important that defenders of liberty make consistent, rational defenses of liberty and avoid extraneous arguments.  The case for liberty is independent of hypotheses in climatology, medicine, physiology, etc.

(BTW, I pass no judgment on the merits of the paleo diet.  The concept is interesting, I've discussed it with an important practitioner -- even helped arrange for him to speak at  [Dilorenzo Rule redaction] College -- and experimented with it myself.  In my experience, it works almost as well as the Pritikin diet, its near opposite, and both are superior to the nonsense I've heard dietitians endorse, which is in turn superior to what I see people buy in checkout lines.  But perhaps this is a subject for another post. Photo: the noble hamburger, which fails by the paleo, Pritikin, and nearly ever other diet criterion, yet may be the finest food ever invented.)

Comments:
I must admit I've never heard of you before your Freeman comment. This shows just how badly libertarianism is doing nowadays: The LRC/LvMI/FEE crazies have taken over, and sane voices such as your are not heard. I'll keep reading, so keep writing.

By the way, I replied to your last Freeman comment, but it's "in moderation", as if anything at The Freeman is done in moderation...

Thanks PL. I had never heard of you either.

I try to stay sane, although not sure I always succeed.

What on earth are "DiLorenzo rule redactions" ? NV

The "DiLorenzo rule:" Anything that lists a place of employment or suggests I might not live in my car must be redacted.