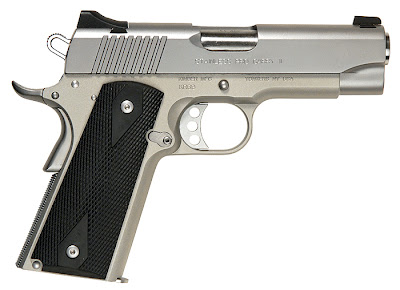 Here's something that is particularly for my American readers: Congress is currently considering H.R. 822, the proposed National Right-to-Carry Reciprocity Act. This bill, if passed into law, would provide that a person with a permit to carry a concealed weapon issued by one state would be permitted to carry in other states with concealed carry laws, subject to those state laws.

Needless to say, The New York Times is in a tizzy, and has published an unusually ill-informed, misleading, and ultimately malicious op-ed by Frank Bruni attacking the bill. Go ahead and read Bruni's op-ed, and then read on here.

It's hardly an unexpected NYT op-ed. Every NYT writer is required to oppose private ownership of firearms. (Q: Did you ever see a pro-gun point of view represented there?) (A: No.)

Bruni manages to get everything wrong, and also manages to miss the interesting points. First, he misrepresents the bill ("lies about it" would be a more accurate way of putting it, but, we're trying to be civil here). The bill explicitly provides that reciprocity would only apply where states already authorize concealed carry, and that any state's restrictions on where weapons may be carried remain in effect.

Bruni also refers to "permissive gun control regulations," as if government decides whether or not to permit people to own firearms. That’s like saying we have "permissive" laws regarding free speech. We do not. Speech is a right, and government isn't allowed the power to take it from us. We are not "permitted" rights by government. We have rights, and we permit government to have certain limited powers. That’s definitely not a distinction without a difference, and it does apply directly to keeping and bearing arms -- in rights theory, in common law, and in the U.S. Constitution and SCOTUS decisons. Bruni snarls derisively at this liberty; I can only gather he'd feel more at home in a police state, where government decides what "rights" it will "permit" its subjects to enjoy.

Bruni's references to people convicted of violent misdemeanors and chronic alcohol abuse are similarly dishonest. It is already illegal under federal law for these people to purchase firearms. There's no evidence Bruni did any real research at all before writing his rant.

The anti-gunners are entirely on the wrong side of the facts concerning violence, as well. Since the passage of "shall issue" concealed carry permit laws (40 U.S. states now have them), violent crime has systematically fallen, not increased. And repeated statistical analyses find violent crime falls in a jurisdiction when "shall issue" passes relative to neighboring jurisdictions without these laws. That doesn't prove a connection, but it is completely unreasonable to claim that these laws increase crime and violence...there’s simply no evidence of this. The evidence strongly suggests these laws help reduce crime.

There is an interesting issue here, but it is one the op-ed writer studiously avoids except to snarl at Republican sponsors of the bill. When and to what extent must states recognize each others' laws? The Loving v. Virginia case immediately comes to mind, in which one state (Virginia) tried to ignore a marriage license from another jurisdiction (District of Columbia) because interracial marriage wasn't recognized in Virginia law. In the case, SCOTUS forced Virginia to recognize D.C.'s marriage license. Interesting question...must a state recognize another state’s marriage licenses? Divorces? Driver's licenses? CCW licenses? Medical licenses? It really is an interesting and problematic issue. The reciprocity bill makes reference to the Commerce Clause of the Constitution. Is it more outrageous to refer to interstate commerce in carried firearms than to pretend that one is invoking the Commerce Clause when one requires that everyone must purchase health insurance? I think not.

In many respects the national reciprocity idea is extremely good. And there are also reasons why it might indeed be problematic. The real question, to me, is what are the proper bounds of federal power in any instance? And I do not have a set answer. I do think that critics of this bill, such as Bruni, have entirely misrepresented it for their own political purposes and are dodging the real issues.

Bruni mocks the idea that the current situation is potentially nightmarish for gunowners; here he is simply being stupid and insulting. An innocent gunowner trying to follow local laws can easily run afoul of the confused mish-mash of state laws. For example, over the past three months I have asked three different police officers in [redacted] whether it is legal for a person to travel in the state of [redacted], with a handgun locked in the trunk, if the person is neither registered in [redacted] to own it, nor a CCW holder. The first assured me it is perfectly legal. The second said it depends on the local jurisdiction, and is their judgement. The third told me it is a certainly felony. Obviously no NYT writer worries about these things or cares what happens to any gunowner, but this stuff is a genuine nightmare.

That Bruni's op-ed is simply an anti-gun rant is given away by the reference in the title to Glock, the bugaboo which still scares the antigun crowd as "the pistol designed to beat metal detectors..." probably the craziest thing anyone ever made up about firearms, but apparently still dogma among the hoplophobes.

But having said all this, I do have a solution to the issue. I've read the bill, and don't think it really does overstep federal bounds, since it doesn't create a concealed carry right where none exist. So I'm for it, but here's something else. Never mind reciprocity (I think most of the 40 states currently already recognize each others’ CCW permits already). Instead, what about a federal "shall issue" CCW permit, one that permits the holder to carry concealed in any state or federal territory (including the People's Democratically Disarmed Republic of Illinois, the only state with no concealed carry provision at all). 1. This would circumvent the possible problem of the feds stepping on state powers and SCOTUS issues concerning state permits. 2. If the state legislatures in some states think other states' CCW permits are too laxly awarded, they can still not recognize them – the feds can put a higher standard of training on the federal permit which should satisfy this concern. (The feds are already doing this, of course...FBI, Secret Service, etc. are not required to get state permits for local carry when they cross state lines. None of the hoplophobes are complaining.) 3. This also passes constitutional muster in the sense that the militia in Second Amendment was always meant to mean the armed populace. We might as well give "them" some training while we are at it. The Swiss already do this (it's mandatory) as do the Israelis (and in Israel one can even "check out" a handgun to carry).

NYT and Bruni don't care about the liberty nor safety of the vast majority of Americans...that's hardly news. But why not provide more training to Americans, and more opportunity to actually take responsibility for having a safer, more peaceful society? (Yes, gun ownership demonstrably contributes to that, Frank.) A national concealed carry permit as an addition to state laws and state reciprocity would make great sense.

Anyone wishing to read more on this issue should read the text of the H.R. 822 as well as this op-ed and this summary from the NRA.

Photo: Kimber Pro Carry II in .45 ACP, a favorite of the UC staff. It's made in New York, where, ironically, we would not be allowed to carry it.

Disclaimer: Certain place names have been redacted from the above in keeping with our policy of living in our car and listing no place of employment.