In 2005 I realized that commenting on the Bush 43 regime was an endless task, a black hole, and largely swore off such commentary. Since then I’ve hardly been able to wait for this "goodbye to Bush" post.

In a few days, George W. Bush will step down as the 43rd President of the United States. In his eight years in office, here’s what he has done for my country:

* Started an unnecessary war in Iraq.

* Incompetently fought that war, and another in Afghanistan, exhausting our military and offending most of our allies in doing so.

* Strengthened Iran in the process.

* Abandoned serious diplomacy and negotiations in the Israeli-Palestinian conflict.

* Tried to abolish habeas corpus in the U.S.

* Established one of the most expensive welfare programs ever, Medicare D (the Prescription Drug Benefit).

* Promoted trade barriers by imposing tariffs on imports from China.

* Engaged in the greatest nationalizations of private property ever seen in America, with the so-called "bailouts." This deserves special emphasis: Bush is America's greatest socialist.

* Promoted and gained retroactive immunity for private corporations who facilitated this spying.

* Presided over the Katrina catastrophe, in which his incompetent political appointees diddled while Americans suffered and died.

* Politicized DoJ and similar hirings, making political correctness, rather than competence, the basis for hiring.

* Blocked investigations into corruption, drug use, and use of prostitutes by administration appointees in Interior who were awarding federal contracts.

* Mangled the English language repeatedly, and embarrassed America in front of the world by acting like an uneducated idiot.

My list could go on and on. This man’s presidency has been a catastrophe beyond belief. He has even offended some of his most ardent supporters. Joel Belz, editor of the evangelical news magazine World, and until now a great supporter of Bush, expressed horror at Bush's recent inarticulate babbling about his doubts about Christianity. It’s unfortunate that these doubts didn’t give George pause when he supposed God had selected him to impose democracy on the Middle East. (The editorial is worth tracking down, dear readers.) His was a regime so awful that numerous American military officers and legal scholars think that war crimes trials of Bush and his advisors would be within the realm of reason. This is the man who looked into Putin's eyes and saw gentle kindness. This is the man who told reporters that Social Security is in jeopardy because the trust fund in nothing but federal government bonds, worthless IOUs... and a moment later said that under his privatization scheme, citizens preferring a safe asset could invest in, umm, federal government bonds. This is the man who financed his mad regime by selling said bonds to Asian central banks, to the point that most of our national debt is held by foreigners, and not very friendly ones at that.

I was relieved when Bill Clinton finally left office. He was clearly an opportunist and a crook. But when he left, the American economy was in reasonably good shape, the federal government had a budget surplus, the former Soviet Union was thing of the past, the world was mostly at peace, and it looked as though we almost had a settlement of the Israeli-Palestinian conflict. The world was a hopeful place. By contrast, Bush leaves a dreadful shambles in all these areas.

Wars, defeats, police statism, fiscal and monetary irresponsibility, economic fiasco, socialism, general irresponsibility, incoherence, abrogation of the rule of law, and lack of personal integrity - that's the Bush legacy. I hate George W. Bush for what he has brought to my country, and to the world.

So George W. Bush, good riddance to you, you evil man - and two shoes to you, wherever you go. 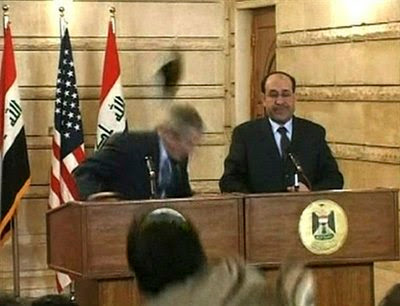