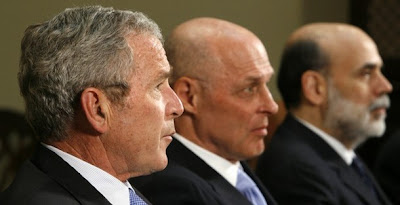 Section 2b gives authority to the Treasury Secretary "to take such actions as the Secretary deems necessary to carry out the authorities in this Act, including, without limitation..." (emphasis mine)

Section 8 needs to be quoted in full:

Decisions by the Secretary pursuant to the authority of this Act are non-reviewable and committed to agency discretion, and may not be reviewed by any court of law or any administrative agency."


So... an unelected official, the Secretary of Treasury, is to be given a line to $700 billion "to purchase, and to make and fund commitments to purchase, on such terms and conditions as determined by the Secretary, mortgage-related assets..." and his decisions "may not be reviewed by any court of law or any administrative agency."

This is the United States of America. Does "rule of law" ring a bell? "Unalienable rights?" "Division of powers?" "Checks and balances?" "Accountability?"

Memo to the Democrats in Congress: are you really about to hand such unchecked power to the Bush administration? PLEASE WAKE UP!<

Note: Barack Obama is endorsing the plan (I guess this is "hope" at work), but John McCain appears still to be undecided. Memo to Senator McCain: Ready to be maverick? Turn Washington upside down? No more business as usual? Country first? OK, now is the time.

Comments:
Charles, I realize you are angry these days. That is no reason to use such an insult to qualify the President of the United States. Find something else, please, for the sake and in memoriam of those who have been REALLY persecuted by the Bolsheviks. NV

Nathalie, I appreciate your point, but "Bolsheviks" is how Nouriel Roubini has characterized them.

But Bush, Bernanke, and Paulson are engaged in what many serious analysts (and John McCain) are calling the greatest single power grab in American history. It's extremely dangerous; with kinds of powers Bush has brought to the presidency and is trying to add, I think it's a coup against the American system. Newt Gingrich says that if this power grab goes through, it will take twenty years to undo the damage. I think he underestimates the threat. After all, consider: if you eliminate the distinctive individual liberty that still lingers in America, wreck the economic "power" of America, and centralize power in the presidency, you don't just ruin America, you effectively eliminate the "gravitational pull" for a liberal order that America exerts around the world. Something else, perhaps an Eastern Asian model, will become the dominant paradigm.

"Bolshevik" is appropriate. It's terribly dangerous, and I think there's conscious evil in what they are doing.

While I am at it, John McCain has -- thank God -- begun talking sense on economics, and has come out against this proposal. Thank you Senator McCain! Please keep it up!

you have been hear , it seems, Nat