We'll return after a brief word from our sponsor 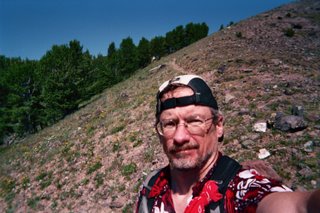 I don't actually have a sponsor. I will, however, take a brief break from blogging and most other activities while I relocate from Montana to Hillsdale College in southern Michigan, where I will be a visiting professor for the coming year, teaching Austrian Economics and History of Thought.

In the interrim, for your viewing pleasure, here's a self-portrait taken 22 July during the Devil's Backbone 50 Mile Run. If I do not look that enthusiastic it might be owing to the fact that even though it's still early morning and we're above 10,000 feet (3,300 m.) the temperature is approaching 90F. I gave it up at the 25 mile point (the only place besides the start/finish where you can get off the ridge) to avoid making a mild case of heat exhaustion worse. Luckily one of the guys at the turnaround station had his truck parked 2 1/2 miles below the ridge, with an icebox full of Molsens and Heineken, which he offered to share. Several of us "exhausted" runners set new records in the mad dash to the truck.

For more info on this and other great Bozeman area ultras see Tom Hayes' great website.

Comments:
Congrats on your move. Hillsdale College should be an interesting … gig, as we say in New York. Having a long classical liberal tradition, and being the only fully independent college in the nation (i.e. independent of the government,) it will be interesting to hear about your experience.

By the way, I enjoyed your response to Allen Weingarten on that old thread and left a comment of my own. I’ve wanted to discuss the topic more generally and hadn’t answered Allen myself for lack of time.

But it clearly seems to be a very different place, and mostly in a positive way. I will happily report my experiences once I have sufficient time here.

I'll check out your reply on the old thread.

I added the comments below in response to your comments on my old thread. I actually like the fact that others, who are continually confused about your viewpoint or just hostile to things libertarian, are not around. Below is a copy (I assume you get your comments as e-mails like I do.)

I’d like to read more Hayek and understand his view of society and culture. My read is restricted to “The Road to Serfdom” and “Individualism and Economic Order,” which I read long ago. If you know in which book he discusses the evolution of human culture in more detail, I’d appreciate that. I see my library has books by Douglass North and I requested one. They don’t have any by Paul David.

Speaking of books, I highly recommend Edward W. Younkins’ “Capitalism and Commerce: Conceptual Foundations of Free Enterprise.” Despite the book's title it spans philosophy, economics, law, and just about anything concerned to classical liberals. He’s particularly concerned with an Aristotelian ethical/flourishing approach. Each chapter in this book is virtually a review of a specific topic or areas concerned to libertarians; and with a bibliography at the end of each chapter of the major books in the area. The chapters are a bit terse for the novice but they make good summaries in conjunction with further reading. Here’s a conservative’s mostly positive review. He writes periodic reviews of major thinks and important issues on the web.

You're right that we weigh the elements comprising societal evolution with somewhat different weights. It’s a tough call and I’d like to read more as well as try to articulate my current working hypothesis. I’m more concerned with what makes for a robust foundation for a liberal order so that a culture can withstand the challenges that tempt a nation to slip down the slope (or fall off the cliff) into illiberal oppression and impoverishment. Often the triggering mechanism only reveals the underlying rot. But I need a review of literature both sympathetic and critical of my tentative thesis.

Thanks for the comments.

Actually I do not recieve comments as email, but maybe I should enable this.

The Hayek work that best addresses these matters is "The Fatal Conceit," his final work. I think you will find it quite thought-provoking.

I don't think Paul David has any books, at least I don't know of any. North addresses these sorts of issues, but to me he's good at establishing their importance but not at making headway at generating deeper understanding. Simply establishing importance is still useful work since neoclassical economics largely ignored the importance of culture and subjective knowledge -- but you might not find his stuff quite so interesting.