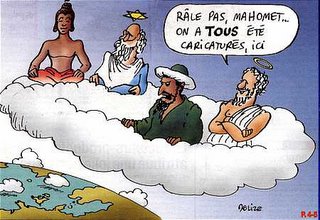 Difficult to find, but here it is..."Don't grumble Mohammed; we are all caricatured here!"

Comments:
I thought I left a long comment here earlier today. In any case, all the cartoons are rather mild if not goofy. One wonders if they know that their threats of violence only encourage people to view the depictions as even more plausible. This "don't call us violent or we'll kill you" just doesn't win sympathy.

To give credit where credit is due, besides the Free Muslims, I read a quote supporting free speech and castigating the Muslim over-reation from al-Sistani, the Iraqi Shiite leader. The exceptions are to few.

Thanks for your comments, Jason. I never saw your earlier comment, so I assume it never posted. Comments are always welcome, whether they agree or disagree.

The real story behind the Danish cartoons -- someone in Dmark was trying to find artists to illustrate a childrens' book about Islam, but artists all said they were scared it would be seen as controversial. So the Jyllands Posten gathered a few daring cartoonists willing to participate in a test to see how hypersensitive the Muslims are, and how far European PC goes.

It looks like they have been wildly successful in generating experimental data.

Yes, I read about the children's book.

I all for testing the boundaries to establish precedent and insure that freedom is their when others may want to take advantage of it. There used to be a time when defending the most obnoxious speech was hailed as a necessary act to insure a principle. Maybe I’m wrong but I sense a change. And that’s worrisome.

I’m disappointed in the lack of solidarity by the American press. And, of course, the weak-kneed response by the State Dept. that you mentioned.

I'm not sure if you get comments as e-mail but in case you do let me write you this way.

I was too ill to go to the NYU "cartoon jihad" debate. Pamela did and reports here.

I've received copies of letter by NYU grads Erika and Henry Holtzer. I can e-mail you if you e-mail me your address.

It seems, if these reports are correct, that the school threatened, at the last moment, that if the cartoons were to be displayed, the school would block the entry of non-students who had duly aquired tickets through the normal channel. The student group decided that given that choice, they wanted the audience. The school is boasting that they didn't stop the showing of the cartoons but it was a choice by the student sponsors.

"I'll make them an offer they can't refuse." - Mario Puzo